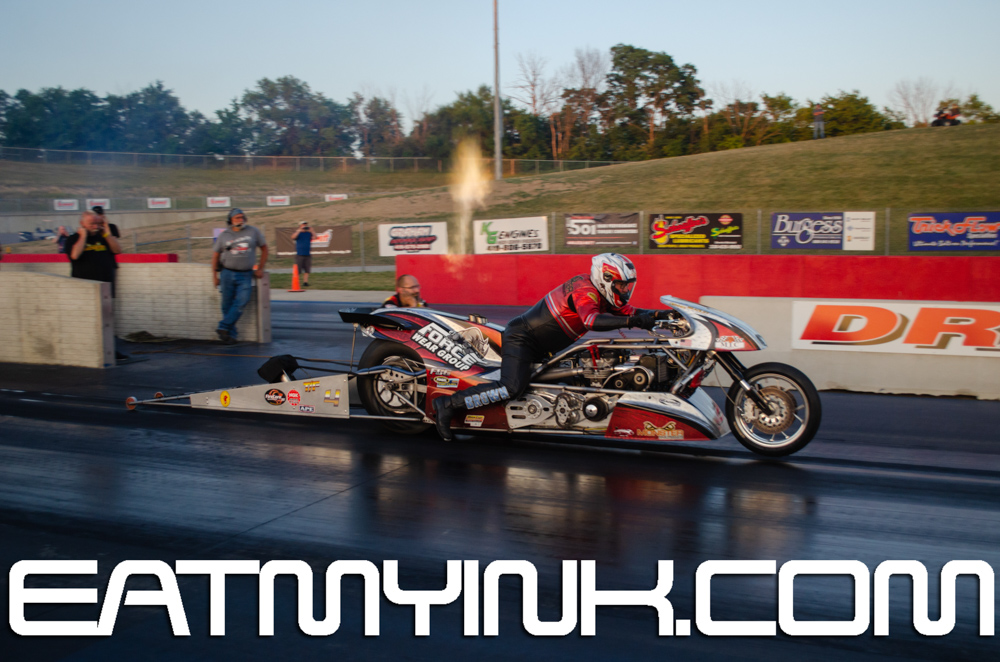 The Man Cup Series finally kicked off their season after the first two races were canceled for COVID19. So the 2020 season started in West Salem, Ohio at DragWay 42 for the 39th annual Fast By Gast Nationals.

The turnout was not the best but the ET bikes filled up the lanes all weekend long. A good number of spectators lined the hills on Saturday and Sunday to watch all the dragbikes go down the track.

The Dennis Bradley Top Fuel motorcycle (featured photo above) was the only Top Fuel bike to attend the event. The team completed five runs throughout the weekend—three on Saturday and two on Sunday. The team’s goal for the weekend was to continue working on their tune-up and support the Man Cup series.

Rider Mitch Brown and the rest of the team went up for their first run in the second qualifying session, as the first session on Friday threatened rain and the team decided not to risk getting the bike wet. The first run was not good for the team. Co-crew chief Fred Weege said “The bike just didn’t sound right.” The team later found some gunk in the fuel system.

The second and third runs for the team took place later in the day. The third and final qualifying session for the pro classes started around six o’clock. The Bradley team made a small clutch cannon movement which helped Brown power the bike to a 1.14 second sixty foot. Putting a hole out early meant Brown was not able to complete the pass.

The third pass on Saturday was a test pass, and the bike put a hole out early just after the sixty-foot, causing Mitch to roll to the first turnout.

Mitch took to the track twice on Sunday, once for round one of eliminations. With no competitors, the team took the “win” with a great pass for the team—a 1.08 sixty-foot and a 4.0 eighth-mile. Mitch clicked it off shortly after the eighth.

I spoke with co-crew chief Nick Moore and asked him how the bike was. “The bleed down was very good, which is almost unheard of for this bike.” Moore said he also mentioned that it sounded good all the way through the run.

The second and final run was an exhibition pass between Mitch Brown and the LSR Racing Harley of Preston Bartlett. This run was even better for Mitch and the team. He ran a 1.07 sixty-foot and a 4.001 eighth-mile. “This was a great weekend for the team. We learned a lot,” said Mitch.

There were only four pro-fuel bikes in competition for this weekend, but the racing was close.

Jim Martin was the man to beat in all three of the qualifying sessions. Martin qualified number one with a 7.59 at 166.60 MPH.

Both of the elimination rounds came on Sunday for the high-gear only, nitro-burning motorcycles. The first pair up was Rocky Jackson and Sam White. Jackson took the win over White while riding very near the centerline.

The second pair up was number one qualifier Jim Martin and LSR Racing’s Walter Halonski. Martin took the win with a time of 7.69 at 167.16 MPH over Halonski.

Jackson and Martin took to the stage for the final around at 2 PM. The nitro Harleys rolled through the water and proceeded to do their burnouts. As the bikes took off at a rapid pace, Jackson started to drift toward the centerline again as the grove in the track drifted left, going right near the centerline, Jackson did not let off and kept it in the left lane. It was a very close race between the two competitors, but it was Rocky that pulled off the win with a 7.72 at 166.4 MPH. Martin was close behind with a time of 7.76 at 167.2 MPH.

This class never seems to disappoint with close racing all the time.

With only four bikes filling the Pro Mod roster, the competition was close. The first qualifying session was topped by Jeff House on his blue Suzuki. Jeff ran a solid number at 4.09 in the eighth-mile, and the other three pro mods did not put down numbers that would challenge.

But House was certain that his other competitors would soon put down runs to rival his. “Paul Gast will get things figured out and run a low number,” House said.

Qualifying session two saw House top the time once again, bettering his time with a 4.07. Ashley Owens and Gast were the only two that got closer, running high 4.19 and 4.18 respectively. Owens’ teammate Eric McKinney made a pass but was off the pace.

Qualifying three had results flipped on their heads. Gast got things figured out like House suggested and ran a 4.01. Owens put down a good number 4.11 and teammate McKinney ran a 4.28 while House coasted to a 5.15 after some sort of problem.

Both elimination rounds happened on Sunday, and the first pair up was Gast and McKinney. This was shaping up to be a good race between the two experienced Pro Mod riders. Unfortunately, McKinney left the tree early, causing Gast to win and head to the final.

Owens and House rolled through the water next. Visors went down and revs climbed before House also left just a bit too early, sending Owens to the final against Gast.

Owens in the left lane and Gast, on the right, pre-staged and staged the bikes. They were off, side-by-side racing until Owens got out of it near the finishline. Gast won Pro Mod, and with only two more rounds, the championship will be tight.

The largest of the four pro classes consisted of five Pro Open motorcycles. Friday saw a few test passes and qualifying session one for the high horsepower bikes.

Shane “Showboat” Eperjesi was first to make a pass on Robert Varela’s turbo GS motorcycle, with a new engine and turbo combination for 2020 accompanied by a Monster Race Products 4 valve cylinder head. Eperjesi’s test pass was successful. “The team was very pleased with their ability to apply that newly-found Monster cylinder head power from start to finish,” Bradley Grothus said. Shane was able to run a 6.44 at 213.6 MPH.

Mark Rendeluk also made a test pass on Friday. Mark’s pass was unsuccessful after he rode the edge of the tire down the track, causing him to roll through the traps.

Qualifying number two saw the same two riders and bikes on top with Eperjesi running 6.27 at 215.7 MPH. Garcia came in with a 6.31 at 209.8 after drifting toward the centerline and spinning on the top end. Rendeluk also ran in the 6.30’s with a time of 6.34 at 214.8 MPH. Butler—learning on the Stoffer/Underdahl Pro Stock bike with a soft tune-up—ran 7.55 at 177.9, coming in fourth. The only other bike in the competition was Charles Thesis on his nitro four-cylinder bike, He did not make a full pass in Q2 due to some unknown error.

In qualifying session three, Garcia jumped to the top with a time of 6.22 ahead of Eperjesi’s 6.38. These two riders where the only ones to lay down competitive times in Q3.

All elimination rounds happened on Sunday and were all filled with great racing. First pair up was Eperjesi and Thesis, Charles left before the tree was activated, which meant Eperjesi won the round. Butler and Rendeluk made the next appearance on the track, with Rendeluk having some sort of problem right off the hit, leaving his bike only to roll down the tack. Butler took the win. Garcia had a bye run due to his number one qualifying spot ran a good number of 6.25.

Elimination two was next up, and Butler and Garcia got right to it. Garcia took the win with a 6.22, but right after the finishline a big puff of white smoke emerged from Rob’s motorcycle.

With it being an uneven ladder, Eperjesi had a bye run in round two, deciding to save the bike while the track was being cleaned up so he broke the beams and headed to the final.

With Garcia unable to make the call to the final due to the mishap on the top end, Eperjesi made a solo pass to take the win with a great ET of 6.20 at 222 MPH.

“The start of this season has been incredible going back-to-back, this is just huge,” Eperjesi said.

The Grothus Ultra 4.60 class has to be one of—if not the most—competitive classes in the Man Cup series. These eighth-mile motorcycles run on a 4.60 index. With this type of racing, it is all about cutting a good light and getting the tune absolutely perfect. With six motorcycles rounding out the field, the racing was close all weekend.

Qualifying times where almost spot on the index. Chase Van Sant took the number one qualifying spot on the Trick Tools bike with a 4.61 over Broderick Jackson with a 4.62.

The eliminations were filled with very tight racing. Van Sant was up first, but he lost the round due to a slow reaction time. “I cut a terrible light and was left to play catch up and didn’t catch him in time,” said Chase after getting eliminated. Jackson took the event win over Les Stimac.

Super Eliminator is a class filled with many different types of motorcycles, whether it is two strokes or touring bikes. “This class is about setting records rather than winning rounds,” said Kevin Hutchinson.

With only three bikes in this class, the competition was slim. Tyler Fisher came out with the win on his blue and orange Busa.

With fifteen motorcycles in this class, all running an 8.20 index, the racing sure didn’t disappoint. But only one person can win and that man was Norwalk legend Craig Adams.

Matt Smith took the first win of the season in the MTC Super Comp class.

All motorcycles in this class must be road legal. Any type of ET racing is always good with riders trying to get their machines to the exact dial-in.

The winner was Ken Koby on his Chopper. Ken ran his 12.80 dial-in consistently all weekend, witch is exactly what it takes to win.

MPS Pro ET bikes run their dial in’s absolutely perfectly. This class might just be the most diverse class in Man Cup, with many riders from street ET races in this class as well. Alexis Baker took the win on her Kawasaki dragbike.

Rick McWaters took the win in the V-Twin class. Running a 12.0 dial-in, Rick ran consistent 11.99’s all weekend, leading him to the win. Rick also took the win in Street ET on Saturday.

Check out Adam’s full photo gallery and BUY SOME!