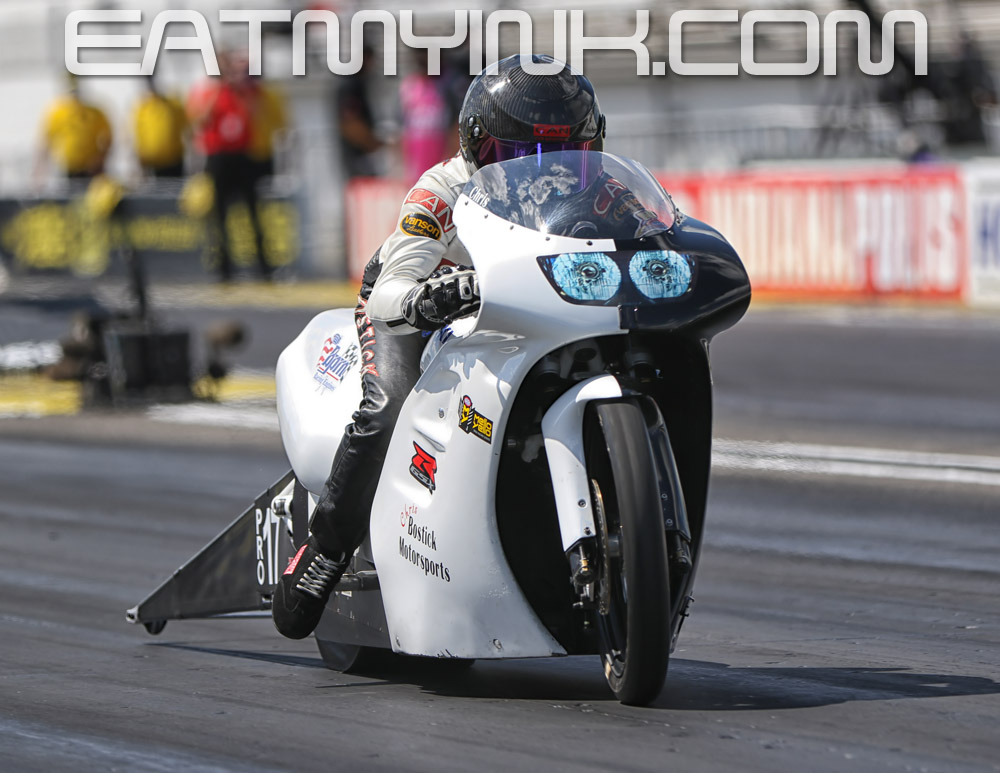 Bostick worked closely during the session with Suzuki PSM masters Greg Underdahl and Gary Stoffer to get the bike—which you can read about extensively here—up to speed for The Big Go.

“I think that pass could have been a .91 or better,” said Underdahl, given that Bostick admittedly didn’t wait on the light for the 1-2. “George Bryce told him that he left as much as a tenth on the table that pass. Let’s put it this way: the Harleys ran a best of an .87, and he would have been right there with them.”

The group made as many as 10 runs on the bike in the 2-day session, despite spending a chunk of time sorting the bike out on day one.

“The wheelie bars and rear wheel needed attention to be able to go straight,” said Underdahl. “Then we started applying power and every pass we made, we went quicker. All in all it was a good session, and we all learned a little something.

“I do believe there is more in the bike and I think Chris knows there is more in him. It shows a lot of promise. This motor is definitely better than the 2-valve he raced here last year—it will be competitive.

“Right now, as it sits, they can come off the truck and run low .90s. And then they can work from there, and have a lot of room for improvement.”

“As long as I can do my job as a driver a little better, we should have a really good showing at the upcoming U.S. Nationals,” added Bostick.

“Huge thanks and appreciation to George Babor at BPM Racing Engines for building an amazing engine that looks like a piece of jewelry/art and runs like a cheetah.

“Also, thanks and appreciation to Greg Underdahl and Gary Stoffer for their help getting our chassis tuned-up and a solid baseline to build from.”

Now that he’s worked with several different people, I asked Bostick who would be calling the shots on Labor Day weekend. “I will be!” he said.

Points leader Ryan Oehler also had a good test session, and he reports that his dad/engine guru Bad Brad Oehler has been “in the port” back home.

“We broke in two tires, learned some valuable clutch info, went A-B six times like an arrow,” said Oehler. “We ran our C motor and went 6.96 at 193.5, but found we had a bad connection in the rear coil wire and were only running on three plugs.”

Pro qualifying for the U.S. Nationals gets underway Friday evening.