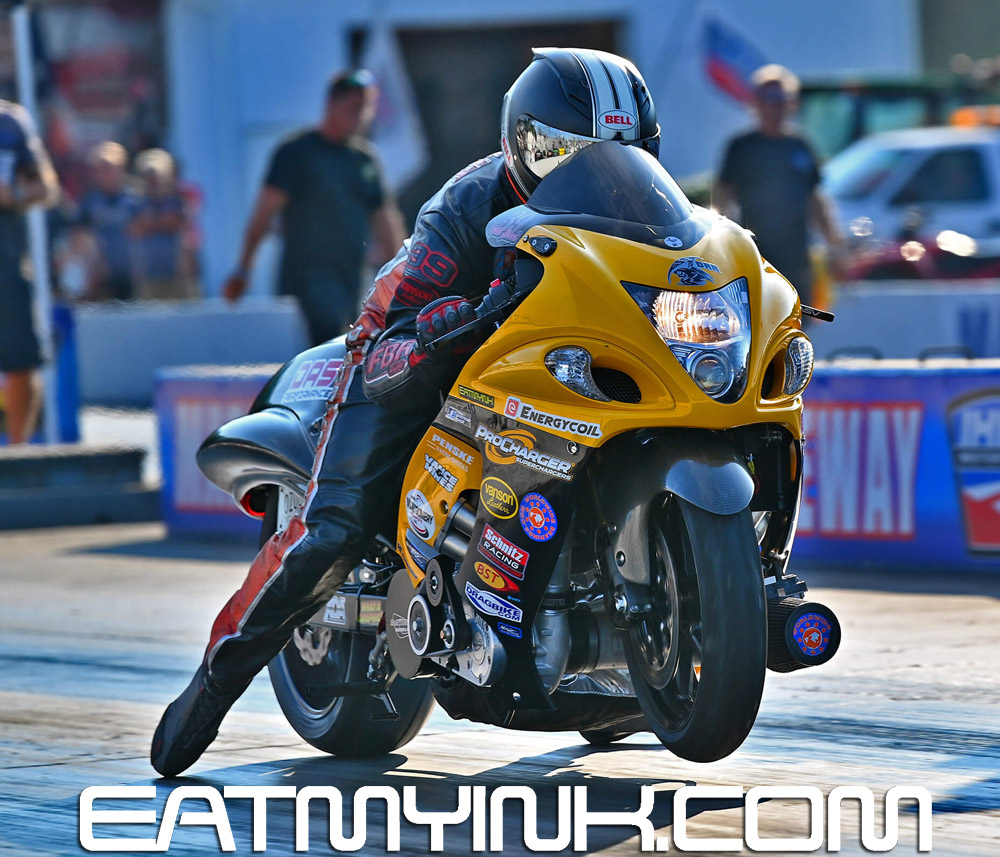 Champion sportsman racer Ben Knight (pictured above) showed up to Maryland on Thursday for testing with his new DAS Performance-built, ultra loud (Knight wears earplugs to ride) ProCharged Hayabusa DME Racing Real Street entry. The bike is screaming fast and quickly became a fan favorite over the weekend—hell, long before the weekend, when Knight started posting photos and videos online.

Ben qualified number 3 with a 7.677 and took out Anthony Weindel, Mark Hylton, and Brandon Teasley on the road to the final to face his teammate and class champion, Spencer Claycomb.

Claycomb qualified #1 with a 7.531, which reset the class ET record previously held by defending class champion Jeremey Teasley. Jeremy not only lost the ET record, but he lost in round one of eliminations to “Super Dave” Stewart.

Team ‘Shake and Bake’ were ecstatic to be in the final together, where Claycomb turned on the redlight, sending Knight to his first pro class winner’s circle.

“I had no idea,” said Ben. “I kind of had a shitty launch. He didn’t seem like he was that far out in front of me, but when I clicked third, it just couldn’t take it. So I was kind bummed and let out of it. I watched the board light up to a .71 (for Spencer) and I thought ‘Well shit, he didn’t even go that fast.'” Knight’s best pass of the weekend was a 7.559.

“I was happy we both made it to the final, but I’m kinda moping down the track. I get to the end and I say ‘Man, I really wanted to win that race.’ And Spencer says ‘You did. Sorry I couldn’t give you a good race.’ I was like ‘What?’ and he said ‘I went red, Dummy!'”

The weekend’s results—which included Brandon Teasley going to the semis on a Kawasaki ZX14—left XDA’s Jason Miller considering a rules boost for the combinations unable to keep up with relatively big riders on supercharged or nitrous bikes. “We are not slowing anyone down,” Miller said emphatically.

Ehren Litten, who holds the MPH record at 232.59, ran an impressive 229.70mph on an entirely new set up for this year. And on his Litten-built and tuned Hayabusa, Greg Wallace also put down big MPH with a 228.89 that will earn him the #4 spot on the Pro Street MPH GOAT list.

Teasley’s turbo Suzuki GSXR1000 had a valvetrain issue and slowed to a loss against Kenny Brewer in round 1, making it his second E1 loss of the day.

Chris Moore won over his brother Alex in round one with a 6.60, then in round two ran his personal best PST pass with a 6.509 against Rodney Williford, who redlit on his 1000.

In the semifinal, Moore faced Justin Shakir, who had problems at the starting line, sending Moore to the final to meet Greg Wallace.

Wallace got the starting line advantage in the final, cutting a .047 light on Moore’s .132. Moore fought for control over his GSXR1000 as it pulled him over the centerline, taking out the 1000′ cone. Greg Wallace won running a 6.547 to take the points lead in what will only be a three-race series this year.

“Showboat” Shane Eperjesi continued the run he started at the PMRA race in Tulsa, qualifying number 1 with a 3.969 in XDA’s quickest eight-mile category, Pro Xtreme. Eperjesi’s turbo GS looked to be the favorite for Sunday when he also broke the track record to 194.43mph in qualifying. Unfortunately, he was unable to back up the number to make it an official XDA record before he lost in round two of eliminations.

That loss was to Travis Davis. Travis went on to the final to take on Rob Garcia, who qualified number 2 and ran the quickest passes in rounds one and two of eliminations.

In the final, Garcia ran the quickest ET again at 4.000 to Davis’s 4.050. However, Davis had a much better reaction of .047 to Garcia’s .189, and that win at the tree got him the win at the stripe to make Brandy Davis’ husband the winner.

Jyrec Givens, on his 2017 Suzuki GSX-R1000, took the number 1 qualifying spot running an 8.877. Jyrec took that advantage and turned it into a final-round appearance to face David Fondon.

Fondon set two records on his way to the finals. In eliminations round two, Fondon set the MPH record to 161.33, and the ET record in the semifinal with an 8.742 run.

With all that record-setting, it was not surprising to see Puerto Rican Fondon take the win with an 8.860 to Givens’ losing 8.963.

But on Sunday, Ronnie Procopio and Steven Shriver were unbeatable in the first four rounds of competition to meet in the final.

Procopio went into the final with the better reaction time average and kept that pace, cutting a .043 light to Shriver’s .076. Shriver ran quicker with a 4.611, but that reaction time advantage gave the slower 4.628 ET of Procopio the win.

FBR Shop 5.60 index eight-mile was dominated by the DRR team riders from Tennessee. Dustin Lee took the number one qualifying spot with a 5.600.

Lee would then meet teammate Spencer Claycomb in the final for a Hayabusa face-off. Lee won the battle at the tree with a .015 to Claycomb’s .051. With Lee getting the advantage on the tree, Claycomb pushed too hard at the stripe and broke out, running a 5.570, handing the win to Lee.

In Sunday eliminations, Tylan Beckelheimer took out number one qualifier Lee in round two, and would win three more rounds to make it to the final.

Beckelheimer met Andrew Ritchey in the final. With both riders looking to run dead on 8.88 they both gave the tree a push and cut almost identical reaction times. Ritchey didn’t back off enough at the stripe and broke out with a 8.861 to give the win to Beckelheimer, who ran 8.891.

Jimmy Shifflett may or may not still be a Hillbilly, but he’s definitely a Hustler. Shifflett and Erik Phipps put on a show Sunday night that was a nail biter to the end. Shifflett dialed an 8.06 and Phipps an 8.01, and both riders would cut identical .060 lights. As both riders shot off toward the finishline, you could see them keeping an eye on the other as they gauged the stripe. Shifflett would get the win, running dead on his dial with 8.069 to Phipps’ 8.043.

Shifflet won 3K and then went on to compete in MPS Pro ET for a chance at another 3K. However, Stephen “The Right” Knight would take him out in the semi’s to end that chance for a double win weekend.

Sunday’s MPS Racing Pro ET the final did in fact feature Stephen Knight, this time racing Wilson Burkhead. Both competitors entered two bikes, and actually faced each other in the quarterfinals also, where Burkhead won when Knight redlit. And in the most important round of the day, it was Burkhead who turedn on the red this time to give the win to Knight.

In Saturday’s race, James Farmer and Bill Maturo Jr won seven rounds to make it to the final. But the final would be uneventful as Maturo was broke and Farmer got an easy final round win.

On Saturday, Maryland racers Montrell Johnson and Laray Proctor won six rounds of competition before facing off In the final. Johnson waited at the tree with his 8.95 dial-in while Proctor left first on his 9.75 dial. With closely matched reaction times, the win came down to who could gauge the stripe better. Montrell took the win when Proctor broke out running a 9.748.

On Sunday, Derrick Milbourne and Tyrone Dale would be the last men standing. On his 2005 Kawasaki ZX-10R, Milbourne dialed an 8.90 to Dale’s 8.96 on his 2008 Suzuki GSX-R1000. Dale took the advantage at the starting line with a .010 reaction time to Milbourne’s .032. With both racers looking at each other and working the throttle at the top end of the track, Milbourne got the win, taking the stripe first and running closer to his dial with a 9.126 to Dale’s 9.298.

In round one of Monster Bulls, Howard Green on ‘Son of Sam’ got a bye to the final while David Page on ‘Pickin Pockets’ had to earn his spot—taking out Dave Martin on ‘Gobstopper.’

In the Final, Page put in work again as he and Gerken had a close race with Page taking the win by half a bike length.

In round one of Tommie’s Motorsports DMV Bulls,’ Quick Money’ prevailed over Jermaine Proctor on ‘5th St Bully’ while ‘Sho Nuff’ took out ‘Da Setup’ to advance to the finals. In the final ‘Sho Nuff’ didn’t have enough and ‘Quick Money’ took the win.

story by Tim Hailey with help from XDA, photos by Terrence Belton  and AJ Pinder