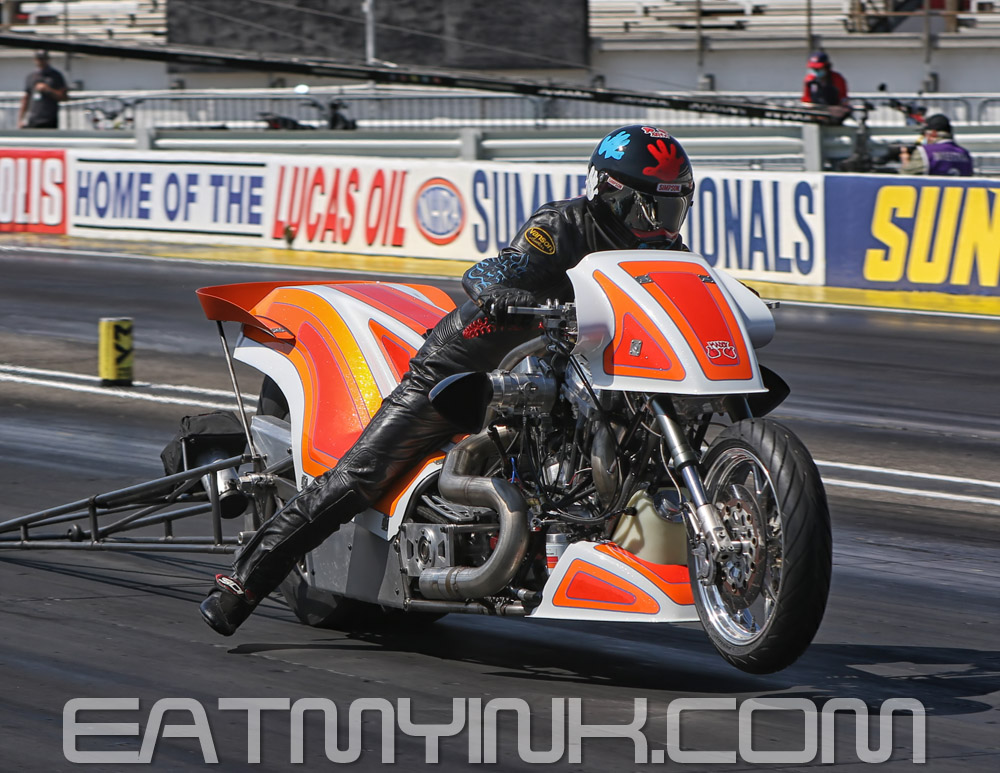 The juggernaut Jay Turner Racing team isn’t sweeping Top Fuel Harley at the Lucas Oil NHRA Nationals (AKA Indy 2) simply because they field more than half of the eight bikes in the field, but that doesn’t hurt. They qualified number one with Chris Smith (his first at an NHRA national event—pictured above) and put Randal Andras and Jay himself in the final because Turner has assembled a team of talent and reliability that never stops seeking to innovate and go quicker, faster.

Case in point: the now orange and pearl mount that Smith qualified number one on is the “Maddy” bike that Tii Tharpe won the 2018 championship with. But it’s not the same bike at all. It’s 25 pounds slimmer.

Ten of those pounds—surprisingly to me ONLY ten—were lost when replacing the planetary transmission with a jackshaft. So “Maddy” is now high-gear only.

The bulk of the rest of the 15 pounds came from replacing the old ignition system boxes, Electrimotion command module, and wiring with a FuelTech ECU. “Look at it,” said tuner and box wizard Rex Harris. “Look how much stuff is gone.”

“It’s definitely the way of the future,” said Tharpe, whose Samson Exhaust “Lagertha” retains—like the rest of the team—the old ignition system. “Now if we can just keep it running to the end of the track.”

Indeed, the number one qualifying bike’s 6.527 saw Smith crossing the eighth mile at 190 miles per hour and the quarter at only 176.

In fact, performance across the board for the team and the field as a whole might be called lackluster, even given the lousy air at Indy this past weekend. “We should have at least been running .30s,” said Tharpe. “We’ve started thinking we might have a bad batch of nitro.”

Tharpe, who barely broke into the 7s while qualifying sixth, dropped a hole before the 330 and lost to teammate Andras in round 1 of eliminations.

Smith also lost to a teammate in E1, Tyler Wilson. “Maddy” spun the tire several times and Smith tried pedaling her to the finishline, to no avail.

Rich Vreeland’s weekend of great consistency was sunk by a .126 light against Turner in E1, with Rich’s 6.68 falling to Jay’s slower-but-winning 6.75. Still, Vreeland was pleased with his team’s three strong A to B passes and number 4 qualifier.

Rickey “Sharky” House qualified number two on Saturday but was done in E1 on Sunday, losing to Ryan Peery.

Peery was recovering from an inauspicious start to the weekend that saw him oil the entire length of the track. He put up an excellent fight against Andras in the semis, but Randal held on for the win.

The Fast Coon Ass will face Turner when the rain-delayed final is run at the U.S. Nationals, after Turner beat Wilson in a semifinal race that was as ugly as the Andras-Peery race was beautiful.

And while Turner is riding the “da Judge” throwback paint schemed “Maddy Too,” it’s not because he’s given up on his other TF Harley innovation—his Pro-Charged bike.

And let’s hope the rest of the class hasn’t given up on racing the JTR team. It was kind of stunning that so many competitors stayed home. Bob “Opie” Malloy, nearby Chris Streeter, and hell!—couldn’t Don “DJ” Johnson find anyone to rent a bike this weekend? Beau Layne is apparently still recovering form injuries in last year’s crash, and Malloy so busy at Boninfante that he doesn’t have time to race.

So in this strange year where even John Force isn’t racing, it’s not easy to tell who’s lost interest and who just wasn’t able to make it this particular weekend. But let’s all pray that Jay doesn’t have to work the phones to get a full field when the nitro V-twins return to Indy for the Big Go.