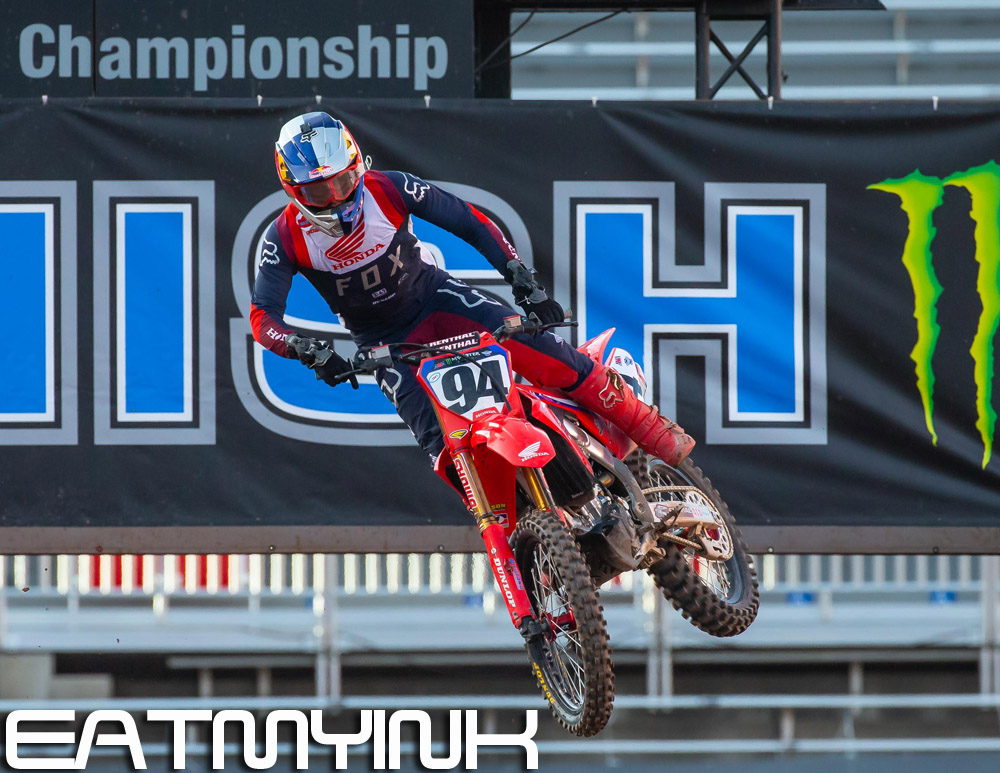 After Ken Roczen’s announcement earlier in the week that he’d been diagnosed with shingles, and how that compounds his other physical ailments, most were not expecting a strong ride from the German rider over the entire 20-minute plus one lap Main Event of Monster Energy AMA Supercross Round 15, presented by Discount Tire at Salt Lake City, Utah. But Team Honda HRC’s Roczen railed into the lead early in the Main Event and took the 450SX Class win.

Red Bull KTM’s Cooper Webb, the winner of the previous round, took second, losing a spot in the championship points to Roczen. Current points leader Eli Tomac of the Monster Energy Kawasaki team turned a first corner near-crash into a podium position; he retains a comfortable points lead with two rounds remaining.

In the second Utah-based round of Western Regional 250SX Class competition, Monster Energy Pro Circuit Kawasaki’s Austin Forkner battled past points leader Dylan Ferrandis of the Monster Energy/Star Yamaha Racing team to narrow the points gap to seven with only one round remaining in that division.

When the gate dropped for the 450 Main, Tomac reached the first corner ahead of the pack but Cooper had the inside line and gave Tomac a strong bump. Webb crossed the holeshot line first, with Rockstar Energy Husqvarna Factory Racing’s Jason Anderson right on his wheel and Roczen right behind. In the second corner, Roczen cut under Anderson and took the line, forcing a mistake that had Anderson jumping into the Tuff Blox and down hard.

Early on it seemed to be a race in which Webb would sprint away, but Roczen hounded defending-champion Webb for three minutes then slingshot around a technical inside rut to grab the lead. From there, the Honda rider was never contested, clicking off his first laps led in any of the Utah rounds of 2020 and nabbing a surprise win. It was his fourth win of the season and the 15th of his career. Tomac reached third place just over six minutes into the race but could never make up the six to seven second gap to Roczen or the three second gap to Webb. With about four minutes left on the race clock he eased back to hold onto a podium finish, the 65th of his career; it allowed his championship points lead to drop under one full race’s points. With two rounds to go, Tomac has a 24-point lead over Roczen and a 25-point lead over Webb, which means Tomac could wrap up the title with a win – or by earning two points on Roczen and one on Webb – at this Wednesday’s penultimate round.

On the podium, even with the quiet stadium that makes this season-ending racing possible, Roczen showed the emotion of the win that puts him back into second position in the championship points standings, “It’s a big, big turnaround; obviously after the last couple of races that’s not easy to do. But I had fun out here. We got the bike dialed and my physical conditions were a lot better today. So, won the heat race and won the main; it was an awesome battle. I really gelled with the track out here today and with the bike, so I’m so happy with what Factory Honda Racing has been doing with me this year, we got the bike super good. And I want to say thank you to all my sponsors that have come along with me on this ride.”

The racing in the Western Regional 250SX Class also defied expectations. A crash in his heat race put Dylan Ferrandis in a bad spot off the start; he still managed a holeshot around the slick, flat first corner just ahead of GEICO Honda’s Christian Craig, with Forkner in third.

Three and a half minutes into the 15-minute plus one lap event, Forkner cut under Craig for the runner-up position and started to work down the 1.6 second gap to leader Ferrandis. With four and a half minutes on the race clock, Forkner put an aggressive contact-pass on Ferrandis, sending the Yamaha rider temporarily off the track. Behind them, GEICO Honda’s Jett Lawrence, a 16-year old rookie, carved his way forward, using lappers to his advantage, and reached his first ever Monster Energy Supercross podium.╩

The win narrows the gap between Forkner and Ferrandis to seven, and gives Forkner the mental edge going into a one round break – which only means one week with the 2020 accelerated race schedule – before the title is decided in the East/West Showdown, which pays standard race points as the top riders from each division race head-to-head for the only time this year.

On the podium Forkner was asked about his charge forward and past Ferrandis after two races earlier in the year when the Yamaha rider had caught and passed him, “The roles were reversed this time. I was behind this time. I was the chaser this time whereas it’s usually been him. So, he had all the pressure on him… I felt really good. Honestly, that race was one of the best races I’ve ever raced as far as Supercross goes. My speed was super good. I was really patient. The track was pretty easy to make a mistake on… those two tight little turns were glass, so it was easy to make a mistake. And I was patient and I waited for an opening. And it wasn’t much of an opening; I had to cut the turn pretty tight and make a pretty aggressive pass. But I mean, you know, he would’ve done the same thing – he’s done the same thing to me, so, you know, I mean all’s fair, it’s racing. And I rode – I’m really happy about that ride. I felt really good.”╩

The rapid-fire racing in Utah continues, with Round 16 held this Wednesday, June 17th, at 7:00 PM ET. The racing is carried live on NBCSN on cable or over the NBC Sports Gold app over an internet connection. The event will host the final standard-format Eastern Regional 250SX Class race before the season finale wraps up the full 17-round series, including the East/West Showdown, on Sunday, June 21st. That mid-day race will be split with live airings on NBCSN and NBC, or in its entirety live on the NBC Sports Gold app.

story, photos and video by Supercross 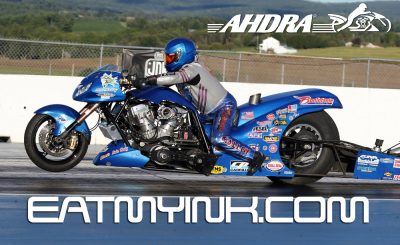