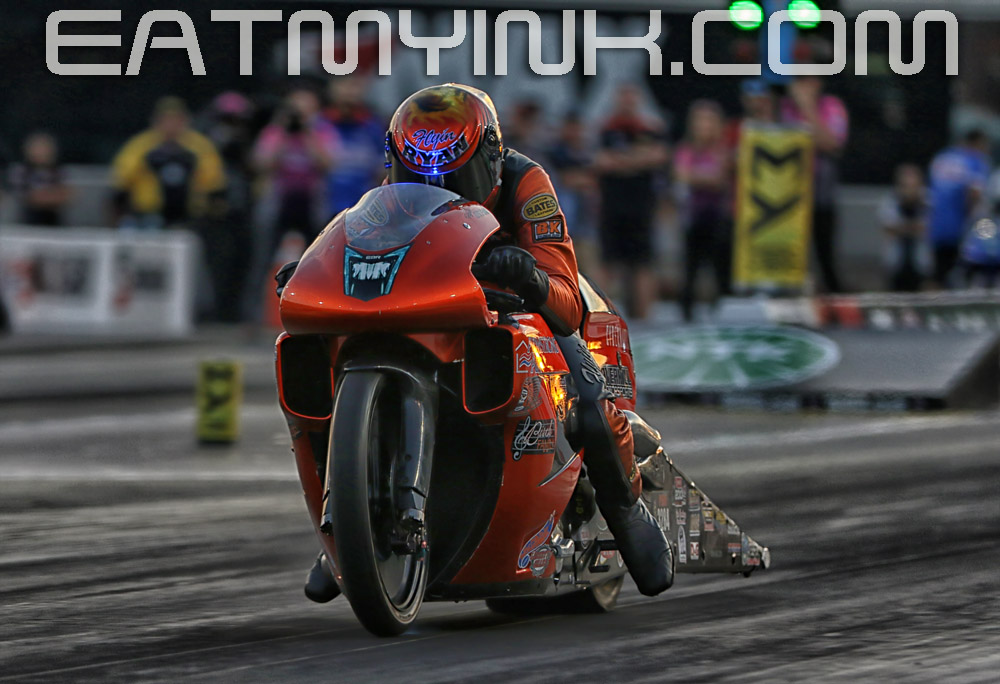 You heard it first here on Eatmyink over a week ago: NHRA Drag Racing will resume in mid-July, relaunching its Mello Yello Drag Racing Series and associated programs with events on back-to-back weekends at Lucas Oil Raceway near Indianapolis.

The two events will be run on consecutive weeks—July 11-12 with Pro Stock Motorcycle (PSM) and July 18-19 with Top Fuel Harley (TFH)—at the home of the newly-sponsored Denso Spark Plugs NHRA U.S. Nationals, and serve as the launch point for 15 more NHRA Mello Yello Drag Racing Series events that will follow beginning two weeks later in Seattle. The season will conclude with the crowning of the Mello Yello Drag Racing Series champions November 13-15 at the Auto Club NHRA Finals at Auto Club Raceway at Pomona. The revised schedule is subject to changes due to evolving facts and guidelines.

The compressed schedule will push small teams to the limit to be present and prepared. “We have four complete engines as of now,” said PSM privateer Flyin’ Ryan Oehler, pictured in action above. “Typically we have two at peak performance and one back-up, but those four will be on ‘kill’ and we have achieved more power during the downtime.

“So it will just depend on whether or not we can keep all the pieces moving in both the race shop, AC biz (Ryan and his dad Brad are in the HVAC business), and home front. I’m not looking forward to our first race in Alaska (AKA Seattle), but we will see if we can make it work.”

Veteran PSM racer Steve Johnson is facing his own challenges, with his right-hand man Ervin “Jock” Allen still involved in a life-and-death struggle with COVID19. “It’s a dream come true to be able to race this year, support our sponsors, and show the world how we drag racers can adapt,” said Johnson. “But at the same time, be compassionate to so many others like our Jock.”

Top Fuel Harley racer Rich Vreeland is happy to get back racing, but as a Harley-Davidson dealer and Christian motivational speaker, he’s had to fill in his schedule as needed rather than wait for NHRA. “If there are any conflicts, I’ll just have to go with what I’ve already scheduled.

“But I am looking forward to racing again at Indy. Last time I raced there I hit a foam block at 180 mph, so I’m hoping to put a better show on this time around!”

The Indianapolis events, both of which will be televised on the FOX Broadcast Network, will be open to a limited number of spectators, with offers being extended via email to NHRA members and 2020 U.S. Nationals ticket holders. The first event, July 11-12, will feature all four Mello Yello classes – Top Fuel, Funny Car, Pro Stock, and Pro Stock Motorcycle – while the second event, July 18-19, will feature Top Fuel and Funny Car along with the E3 Spark Plugs Pro Mod Series presented by J&A Service, Mickey Thompson Tires Top Fuel Harley Series, and the SAMTech.eduNHRA Factory Stock Showdown. Neither event will include Lucas Oil Drag Racing Series competition.

“We’re excited for our Mello Yello Series to return to action, not just for the racers and fans but also for everyone who loves and supports NHRA Drag Racing,” said NHRA President Glen Cromwell. “Because we are an outdoor sport, we feel comfortable opening these Indianapolis events to a limited number of fans who are the lifeblood of our sport and following the guidance of the state of Indiana to resume racing.”

The revised 2020 schedule will consist of 19 total events, with 17 of those events being contested when the series resumes in July. The first four events – both Indianapolis events as well as the newly-sponsored Flav-R-Pac NHRA Northwest Nationals in Seattle and the Dodge Mile-High NHRA Nationals Presented by Pennzoil – will be broadcast to millions of homes on the FOX Broadcast Network.

Sixteen of the events on the revised schedule will be condensed to two-day competition schedules for the Mello Yello Drag Racing Series classes due to economic and logistical factors. This will entail one day of qualifications (two rounds) on Saturday and Final Eliminations on Sunday. Lucas Oil Drag Racing Series classes will begin racing on Friday.

The events in Chicago; Norwalk, Ohio; Richmond, Va.; Epping, N.H.; and Sonoma, Calif., and the spring events in Las Vegas and Charlotte, N.C., that were originally scheduled for the 2020 Mello Yello Drag Racing Series season, had to be canceled as a result of the COVID-19 pandemic. The NHRA Southern Nationals in Atlanta, previously canceled, has been returned to the 2020 schedule in late August.

As previously announced, due to the compressed schedule, points will not be reset after the Denso Spark Plugs NHRA U.S. Nationals at Lucas Oil Raceway at Indianapolis.

*The U.S. Nationals will have one Mello Yello Drag Racing Series qualifying round on Friday and two rounds on Saturday

story and photos by Tim Hailey with help from NHRA