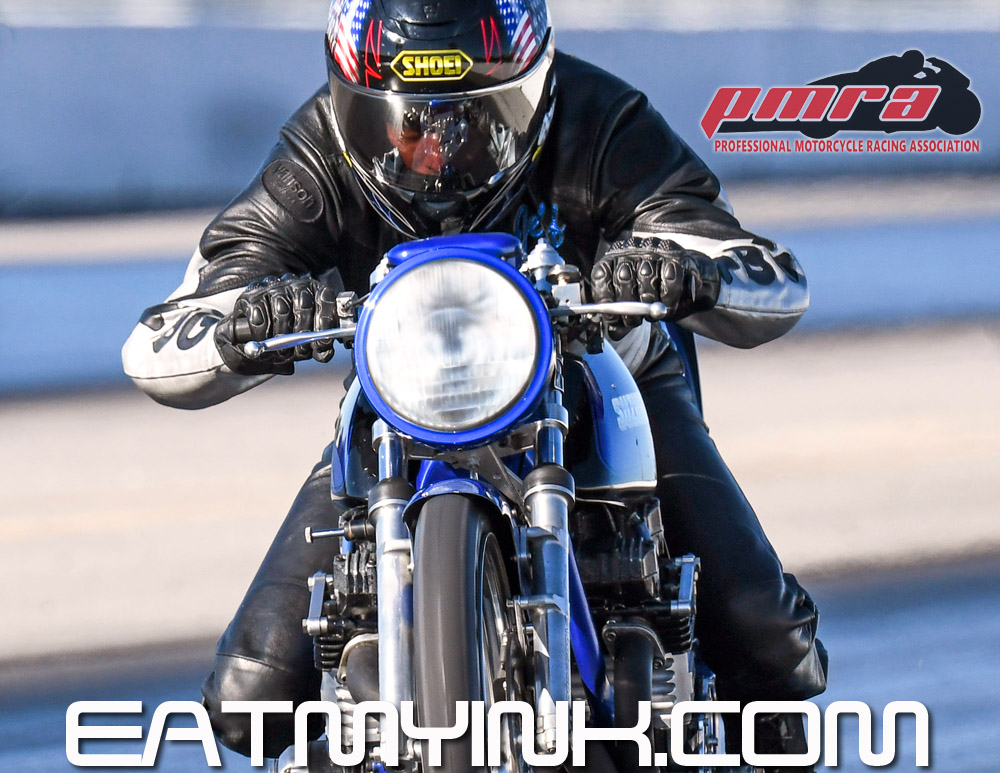 Professional Motorcycle Racers Association (PMRA) returns to the track this Saturday, June 27, at Tulsa Raceway in Oklahoma. New PMRA director Shannon Mendenhall looks forward to welcoming all racers old and new, and sharing with them his vision for the venerable organization’s future.

The event will run a full program of the hottest dragbike classes in the region, including the wild, big tire, turbo Funnybikes, nitrous-huffing Pro Mods, and small-slick “streetbikes” of Pro Open. Defending class champ Mark Rendeluk will be fending off challenges from some major ballers like Shane “Showboat” Eperjesi on Robert Valera’s bike, Rob Garcia, Vince Testa, and the long-awaited return of Nigel Patrick.

“We are looking forward to competing with a great quality and caliber of men and bikes coming to Tulsa,” said Rendeluk. “We will be trying out something new for 2020, and if it works it may be a game changer for us!”

4.60 bikes are similar to their Pro Open big brothers, but cut their passes short at the eighth mile and hold to a 4.60 index.

Top Gas bikes run the full quarter with an 8.20 index, while Super Comp slows it down a touch to 8.90, and Super Gas further still to 9.90. Kirk Reeves, Ryan Schlup, and Jim Miller will defend those championships, respectively.

Payouts are a 70/20 split, class sponsors will be announced at the race.

And when the PMRA program wraps up, racers will have another chance to race deep into the night during Mendenhall’s Midnight Motorcycle Drag Racing Series.

Mendenhall—AKA “Melonhead” or just “Melon”—is the owner of Cycleworld Powersports in Jenks, OK, and has a long history in motorcycle drag racing. His career stretches back to racing with the legendary Marshall and Vicki Farr of Farr’s Cycles in the IDBA and AMA/Prostar days.

But right now he’s most excited about taking PMRA back to the top. “I’m trying to bring motorcycle racing back like it was in the ‘90s and 2000s,” finished Mendenhall.

Whether you’re a fan or competitor, you won’t want to miss this opportunity to get back racing and be part of the new PMRA.

Host hotel is the Hilton Garden Inn midtown in Tulsa.

story by Tim Hailey with photos by Bland Bridenstine