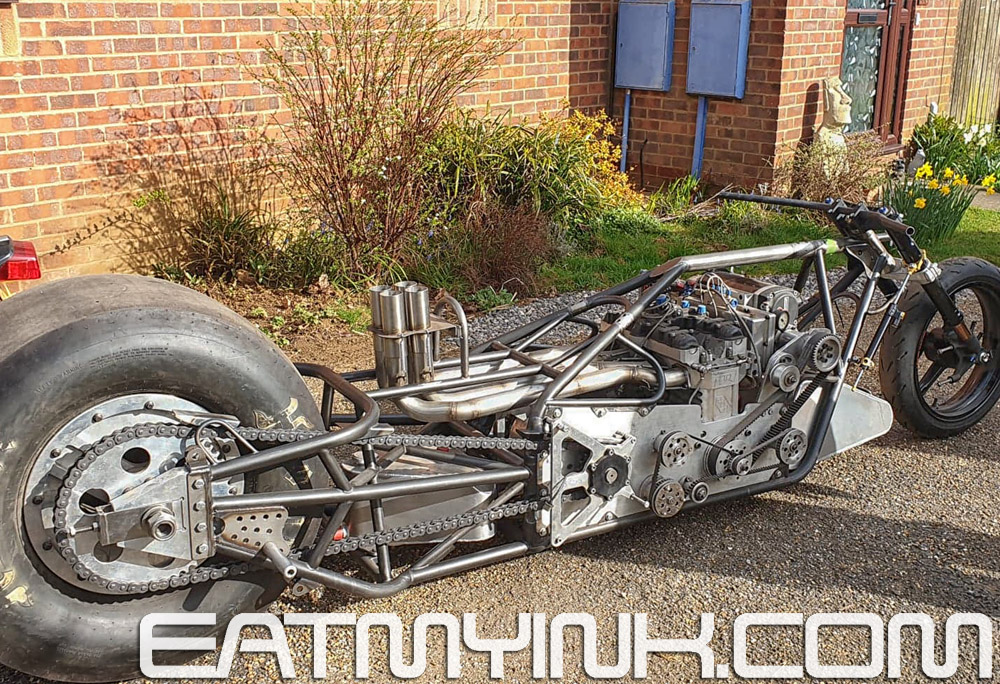 Former ACU Champion Kevin Charman is squeezing his way back into the limelight, returning to the track with a new Top Fuel Bike.

Kevin also crew-chiefed for Lizz McCarthy (later to become Mrs. Charman) in 2013, when she won ACU Comp Bike Championship on the same chassis he won on in ‘06.

Charman bought a damaged piece from Steve Carey, who won the 2006 ACU Top Fuel Bike championship with it. Carey crashed it at Dragstalgia in 2013, “It barrel rolled down the track,” said Charman. “So the chassis was finished, but the motor pod survived pretty well. I bought it knowing that I was going to build a new chassis.”

The bike actually pre-dates Carey. “The set up was bought by Roald Dogge, and a chassis was constructed by Jules Boag and Russel Cook,” said Charman. “This was campaigned in Europe around 1999-2001. From the information I can find, the bike then ran a 7.4 second ¼ mile @ 300 kmh (186 mph).

“Steve Carey bought the bike, and was campaigning it from 2003, making improvements to the bike along the way including a rear wheel from Ton Pels, modifications to the chassis and engine.

“Steve ran the bike until 2013, with a best ¼ mile time of 6.5 seconds. While running demonstration passes he had an unfortunate accident, parting company with the bike. The bike sustained some considerable chassis damage, Steve fortunately only suffered minor damage and did some temporary repairs to get the bike back to a rolling and running bike.

“At this point he decided he had had his fun with the bike and it was time to move on. I got a call in 2014, and was offered a chance to buy the bike with the option of repairing the damaged chassis or replacing it. I then lost a few nights sleep trying to work out if I could make this work. I had unfinished business after parting company with Rene Van Den Berg’s TFB in 2011. So I met up with Steve and after a bit of negotiation we came to a deal, and I now owned a Top Fuel bike.

“With the bike home, the chassis was stripped of all usable parts and the chassis assessed. New engine plates have been made to allow for future modifications and ignition system if needed.

“At this point the decision was made that we would need a new chassis. Options were explored and some seriously talented engineers were considered to undertake the work. I made the choice to use Jon Webster at Webster Race Engineering, as he was a proven chassis builder and was happy to work with some of the ideas I had for the chassis.

“And Dave Branch has as always been a great help machining one-off parts and giving valuable advice. He is also helping with engineering and will be helping to run and set-up the bike.”

“The engine was built by Phil Baimbridge many years ago,” continued Charman. “It is a Kawasaki-based engine using Pete Davies Puma cases and crankshaft. The billet cylinder head and barrel are Phil’s own design, and Arias pistons connect to the crankshaft with BPM aluminum rods.

“Two of these engines were built by Phil. The other is still used successfully in Steve Woollatt’s ‘Dealer.’”

An HPS 2.1 RC supercharger was fitted by Carey. Fuel is supplied by an Enderle mechanical fuel pump and mechanical fuel injection. “The supercharger hat was a cast Puma item that I’m informed was once run by Larry McBride,” said Charman. “Unfortunately, this was damaged so is replaced with a new carbon fiber piece supplied by Ian King, courtesy of Dave Woodard.

“The drive is via a Gates belt, kindly supplied by Ian King, to what I believe is an MTC 8 inch multi-stage slider clutch with a hydraulic cannon to time in the stages. This was on a simple timer, but I have now bought an Electromotion/McBride valve set and accumulator to control the clutch release. This is attached to an Owens 2-speed spragless gearbox.”

There is still a lot to be done with plumbing and electrics before testing can start, but Charman hopes to start testing at the end of the year (depending on the coronavirus situation). “I’m slowly fitting the mags and plumbing. As soon as the covid situation settles down, it will be back to Webster Race Engineering for the bodywork, then we start testing.

“It has taken a long time to get to where we are with the bike. We are funding the whole project ourselves and in between the bike building have renovated our house, sold that, and moved to a new house because we needed the bigger workshop!

“We still hope to be finished and testing the bike this year if the virus gets under control and allows. We will start slowly but the aim is to match and exceed the times that were achieved with the bike in its previous chassis.”