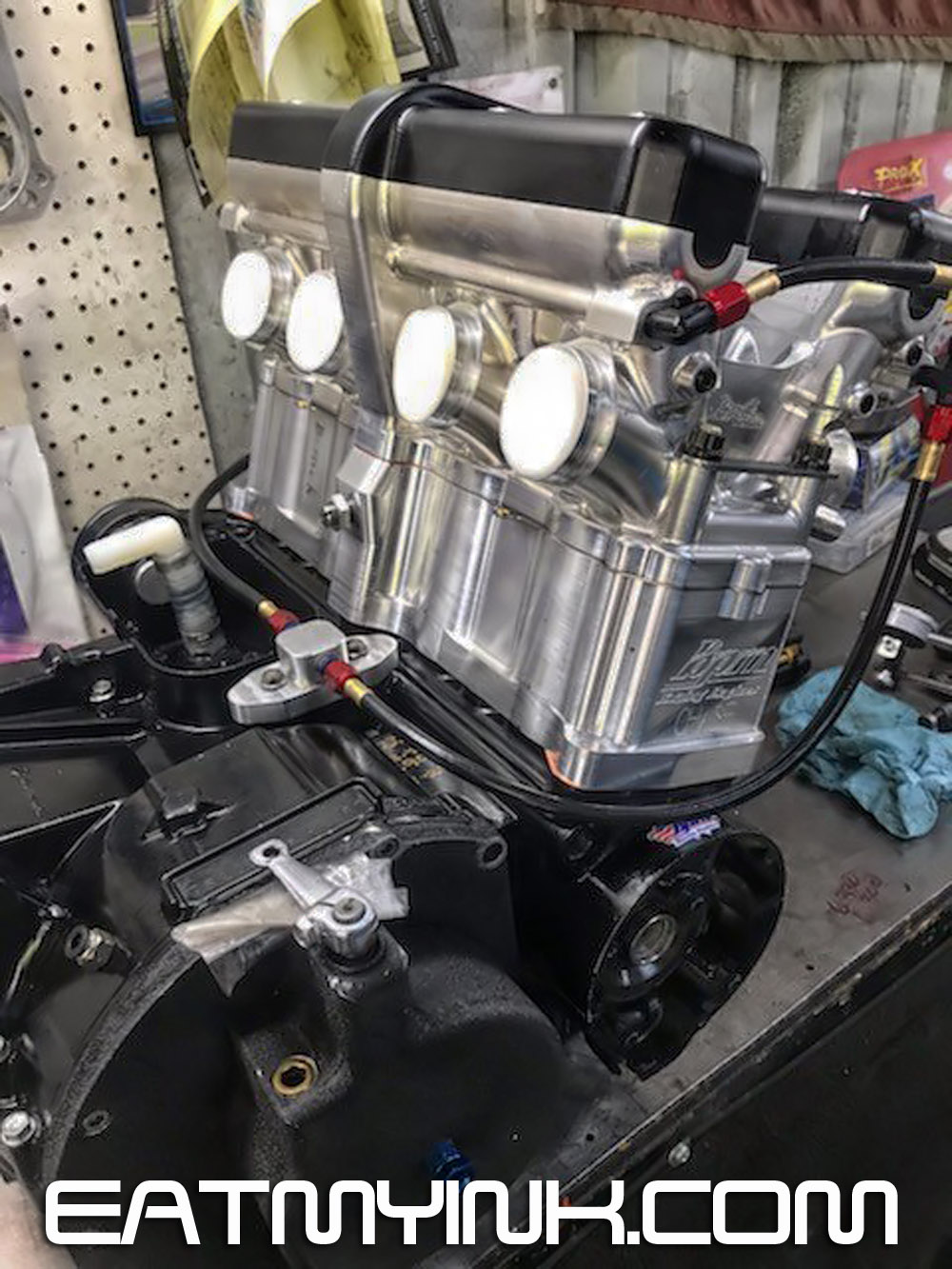 “So I got a call from one of my Monster Pro Stock customers,” said Monster Race Products’ owner Mitch Brown. You might remember that last fall, Mitch’s billet 4-valve head was approved by NHRA for Pro Stock Motorcycle use starting this year.

“They dynoed their engine and it made 14 horsepower more, peak, than their best Vance & Hines 2 valve motor. But it made 25 horsepower more at 9000 rpm.

” I said ‘What can you do with a Pro Stock motor at 9000 RPM?’ Because they live in the trees, they don’t live down there.

“And they said, ‘Yeah, I know. That’s kind of like something that we haven’t figured out yet.’

“But then he called me back and said, ‘We realized that we were so excited when we were dynoing it, we didn’t have the vacuum pump on! So we think that’s another four to six horsepower.’

“So they’re excited about it. I don’t know what that translates to on the racetrack, but it’s good to hear that somebody has got some numbers out of it.”

Brown wouldn’t give me any names—you know how PSM is. But rider Chris Bostick attached his and builder/tuner George Babor’s names to the numbers and added:

“The numbers Mitch gave you are way low”

Let that sink in for a class where gaining one or two horsepower is like puling teeth.

“That first pull on the dyno was with very, very soft timin; very, very fat carburation, and all that,” continued Bostick. “It did make 14 horsepower more, so that is a correct number. However, that was just the first number.”

Bostick offered to tell me a number I couldn’t print, so I declined to listen.

“I’m sure that he (Mitch) is telling you numbers that are low, because he doesn’t want to be embarrassed if I go out there and I can’t make the bike perform,” laughed Chris. “You know, I’ll be 61 here in a couple months.”

A veteran PSM racer of the past, Bostick recently sold his businesses and is getting back into professional racing in his retirement. He jumped on to the 4V bandwagon as soon as he heard it might get approved when he was at Indy last year. He put deposits down on both of the raw heads that Brown had available at the time and, for him, it seems like it’s taken a very long time since then to get a running motor on the dyno.

George Bryce (who insists he won’t be doing anymore of these and is just hopping up Harleys now) took those raw heads and made them race-ready, complete with Web Cams, APE springs, Victory valves, retainers and keepers, Manley lower collars, and Monster buckets made by SuperTech.

Babor has assembled both motors, with the second motor waiting to make sure that the first cam design is the one they will stick with. ‘We want to see how this one is going to do first,” said Bostick. “It would be silly to make two exactly the same. We might be able to make one different.”

The Vance & Hines 2V piece we’re comparing Babor’s 4V motor to is the one that Joey Gladstone ran a 6.89 with in the old Joey DeSantis Poison Dart bike. Bostick—who rented and rode the Poison Dart at Indy last year—bought the motor from Kelly Clontz.

“So that motor’s a good motor, and we’ve been really fast with it in testing with the 2-valve.”

“When  I called Craig Treble after I bought it and told him, he goes ‘Oh my God, you didn’t buy that! Why?'”

Off to a rough start, Treble explained that he had ridden a twin to the chassis: “I know you and I’ve watched you ride, and you can probably handle that chassis. But it’s a handful. Halfway down the track, all of a sudden it feels like it’s trying to wash out on you or something because of the way it’s designed.”

“And the first couple of times that I rode it with the Vance & Hines motor, sure enough, it felt like somebody grabbed the front wheel and tried to twist it out from under you,” agreed Bostick.

“The Gucci chassis had an aluminum plate on the bottom of it where that plate was incorporated as part of the oil pan of the motor. So, you could literally just drop the whole center of the engine out kind of like a V twin now, and put another one in.”

So Bostick and Babor sent the chassis to Dave Skaggs at D&G for alterations. “Dave spent cut sections of it out and put ladder supports in. All that aluminum is gone and there is chromoly steel that has been put in, and it is as strong as a Sam Wills Top Fuel Bike. I mean, it’s square and solid.

“Walt Timblin modified the front forks and brakes, Greg Underdahl custom fit a special airbox, and it was all put together and finished by George Babor of BPM. George (Babor) is the one that has completely built that engine and put the motorcycle together.

“George (Babor) believes that it is one of the best chassis out there, bar none. It’s a cool piece. I mean, it’s not the same bike that I bought from George Bryce.

“Before, whenever I would let go of the clutch, you didn’t know if it was going left or right or what was going to happen. But every time that we have taken that bike out since, I don’t even think about where the bike’s gonna go. I know exactly where it’s gonna go. Wherever I pointed it or wherever they have pointed me. I let go of the clutch and I don’t have to worry about anything except for hitting my shift points right because it just goes. It’s gonna be exciting to see how it will react with the new power.”

Add in some brand new carbs developed by Kevin Gilham at Lectron. “They  arrived the week before the engine—named ‘Chase’ after my oldest son—was ready to put on the dyno. A set of billet carburetors that are bigger, different, and like one-off crazy, crazy stuff. I mean, dual power jets and all kinds of crazy stuff on these carburetors. And when and if we ever decide to go to fuel injection, we don’t have to change these particular billets. He made them to where they can be honed out, bored out to whatever size, and then the bottom of them cut off and put fuel injection on. So a big, big shout-out and thank you to Kevin for hooking us up.” 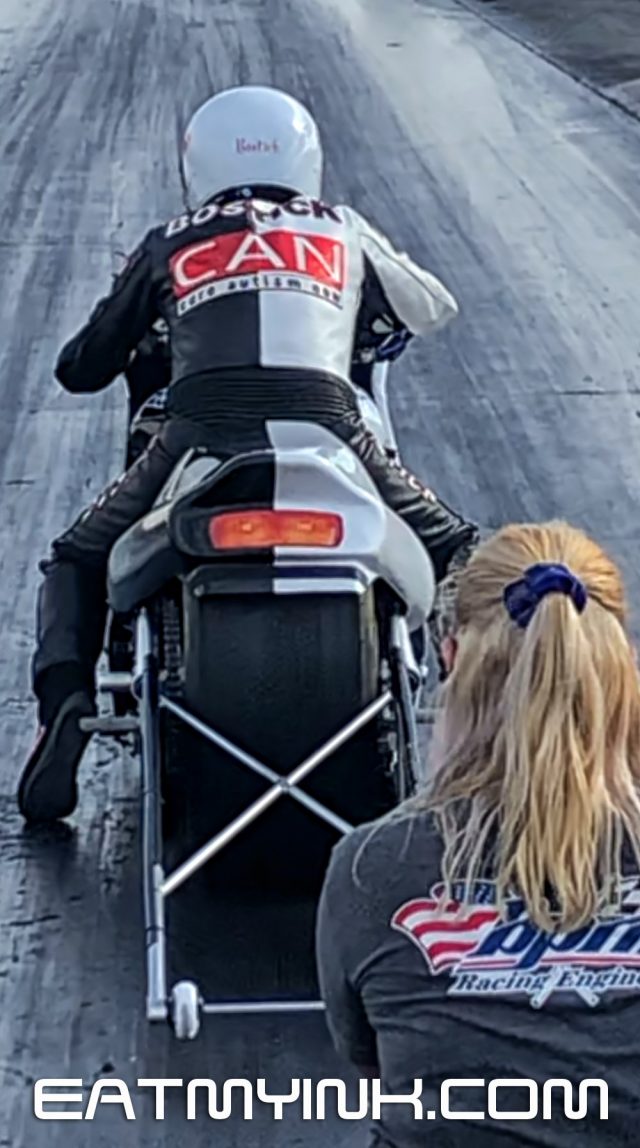 Bostick calls this operation Team CAN. “CAN is an acronym for Cure Autism Now. The paint scheme is white on one side and black on the other to represent that when it comes to helping families that have been affected by autism, there is no gray area. It’s clearly black-and-white, to take care of the kids.”

Bostick is aware that his is a new team and—despite decades of drag racing—Baber doesn’t have recent experience tuning Pro Stock bikes. “He’s done a lot with pro mods, funnybikes, all that stuff. But now he’ll have to tune this motorcycle to leave the line and get past the 60 foot, and as long as I can hit the 1-2 shift like 1.1 seconds after I launch it, and it doesn’t shake the tire—If we can get all that ironed out, I really believe this motorcycle will be a contender in the top half of the field. I think it will surprise a lot of people with a 60 year-old guy sitting on the seat of a—who knows how old that motorcycle is.

“I’m still fit. I’m 141 pounds this morning when I stepped on the scales, and I feel good and I’m as sharp as I have been in forever and ever. But, you know, I’m not a Flyin’ Ryan Oehler. I’m not in my youth or prime.

“But this motor—that motorcycle and that combination—truly if I can ride it to the potential that the motor is capable of, it will fly.

“The only thing I think about is going really, really fast on this bike. I have been so extremely frustrated for months and months. I’ve really thought that we would have two or three months of testing before (the original) Gainesville (date).

“Now after months and months of machining parts, gathering and meticulously assembling the pieces, the new four valve engine fired to life. We’re planning on testing next weekend and if all goes well, we’ll be excited about being a true contender come race day.

“I just hope I can ride it as well as they built it.”

story and photos by Tim Hailey (where noted). Other photos courtesy of Chris Bostick