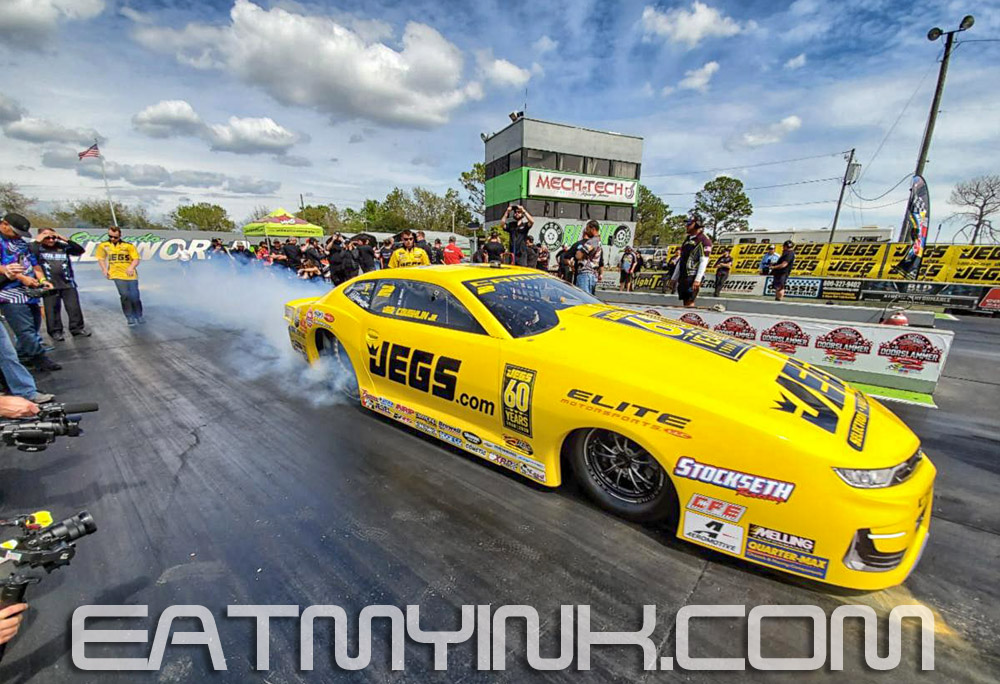 Jeg Coughlin Jr. pocketed the single biggest prize in Pro Stock history Sunday with a $75,000 win over Greg Anderson at the inaugural Drag Illustrated World Doorslammer Nationals presented by Elite Motorsports. It was Coughlin’s second victory of the season in three starts.

With a big stack of cold hard cash on the line—race organizer Wes Buck paid the winners with crispy new $100 bills—Coughlin eked out a miniscule .009-second victory over his longtime rival Anderson, posting a 6.484 at 212.36 mph to Anderson’s 6.485 at 213.81 mph. He left .008 seconds ahead and kept Anderson just in his shadow.

“It’s been a helluva weekend and it’s extremely exciting to be the last one standing Sunday evening at this inaugural race,” Coughlin said. “The format of this race was very intense with just one qualifying run Friday and then three Saturday. We missed the set-up Friday and were hoping the weather would stay good for Saturday and it did, although the sun came out and made it trickier.

“It really felt like things didn’t totally come together for Rickie (Jones, crew chief) until the semifinals today, but the guys fought through it all to get us in position to win and we were able to pull it off. It was worth the effort. Winning $75,000 in cash is pretty bad ass.”

Jeg Jr. entered race day as the No. 6 qualifier with a best pass of 6.478 at 212.76 mph. After a blind draw set the elimination field, he ended up opposite Bo Butner, who ultimately couldn’t get his car started for their Round 1 tilt.

Up next, Jeg Jr. faced his nephew Troy Coughlin Jr., who was making his Pro Stock debut.

Troy Jr. couldn’t have drawn a tougher opponent for Round 1 of his first-ever Pro Stock eliminations, with three-time and reigning NHRA champion Erica Enders in the other lane. Enders is coming off a victory at the last NHRA event in Phoenix that put her into the championship points lead. She was No. 3 qualifier at this race after posting a stunning 6.468 at 213.64 mph.

“What a surreal feeling to race Erica first,” said Troy Jr., who qualified eighth with a 6.481 at 212.26 mph. “She’s a fantastic driver and someone I’ve looked up to for a long time. It was a huge honor to line up next to her. To be fair, we both missed the tree — I only had a .053 light — but I got lucky and she missed it a little more than I did.”

“Racing one of my all-time heroes the next round was another crazy moment I’ll never forget. Uncle Jeg has been by my side every step of the way in my driving career and he’s taught me so much, both in and out of the racecar. He put it down on me there and I feel like I should have done better on the Tree. I still have so much to learn but this weekend was great.”

“It was a big-time atmosphere with everyone who is anyone in the Pro Stock world on hand,” Jeg Jr. said. “To come out on top is very satisfying. Our Elite teammate Alex Laughlin also got the win in Pro Mod, so it was yet another big weekend for our entire team.”