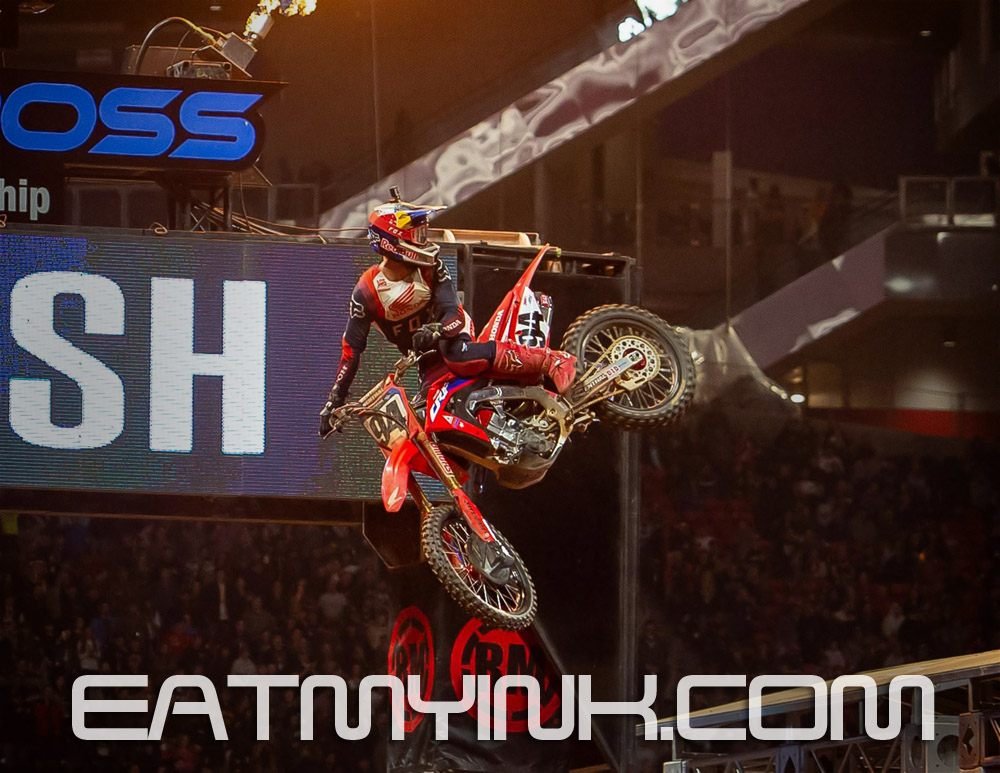 The Atlanta Monster Energy AMA Supercross 450SX Main Event was an intense battle for nearly everyone except race winner Ken Roczen of Team Honda HRC. Roczen pulled the holeshot and disappeared from the pack to convincingly grab his third win of the season in front of 59,743 fans inside Mercedes Benz Stadium.

The victory brings the Honda rider into a championship points tie with Monster Energy Kawasaki’s Eli Tomac. Tomac started the Main poorly, then miss-timed a block pass on Rocky Mountain ATV/MC-KTM-WPS’s Blake Baggett, sending both riders to the ground. Eli remounted in 14th and made the push toward the front.

After two fourth place finishes in the past two weekends, Monster Energy Yamaha Factory Racing’s Justin Barcia grabbed a podium finish the hard way. The Yamaha rider recovered from a 15th place start to steadily and aggressively push through the pack to finish in second place.

Red Bull KTM’s Cooper Webb spent all week recovering from a brutal crash seven days prior. After an eighth-place start, Webb fell back a bit in the early laps but kept his head down.

The tight track provided some wild racing, including Rockstar Energy Husqvarna Factory Racing’s Jason Anderson zig-zagging under the short bridge of the track’s over/under obstacle after nearly high-siding over Vince Friese’s rear wheel, as well as Anderson, Friese and Rockstar Energy Husqvarna Factory Racing’s Dean Wilson stacking up at a turn entry, allowing Webb to ride around all three at once.

With four minutes left on the clock, Tomac reached Webb and started applying the pressure—at that point battling for sixth place. The two moved forward on the leader board and with two laps remaining had reached Martin Davalos who ran in third. On the final lap Webb squared up a 180-degree berm and cut under and past Davalos with hardly an inch to spare. Tomac followed and kept the pressure on Webb, but the defending champ held strong until the end and turned what might have been a no-show event for most riders into a podium finish.

Ken Roczen was all smiles after a major win that pulled him up into a tie for the points lead. “This was a fun race. I mean, I had a good gap and that makes it also difficult. The track broke down a lot more than I thought it was going to, honestly. So that makes it tough. You just don’t want to make a mistake, so you really have to keep your composure throughout the entire Main Event. I had such a blast out there. I felt really good all day and laid it out there, and this is what we had to do. My bike has been working phenomenal here today, [I’m] really happy with it. And every time I win, I’m happier and happier so winning just gets more fun and more addicting.”

On the podium, when asked if he and Tomac were a little heated during their battle, Barcia said, “Yeah, for sure. I made a good clean pass on him and then he just pounded into me, got me pretty good. I was a little bit not happy with that racing, but I want to put that aside. What a great race, charged through the pack. Didn’t have the best start, I’ve been working on them a lot, today [I got] a decent one in the heat race, main event was a little struggle; but can’t thank all the Yamaha people enough. Our headquarters are here in Atlanta, got a lot of guys out here today… It’s crazy racing, brutal track tonight, hard to pass, but obviously made a lot of passes, had a good time. Made some points probably, too, so that’s cool.” The finish, in fact, moved Barcia into third place in the points.

Cooper Webb was clearly in pain on the podium, displaying the challenge he’d overcome that night, “That was probably the hardest race I’ve ever had, but you know it’s amazing after I had a bad start and stalled it and I was way back. And just put my head down and tried to do the best I can. Got a few gifts from the guys up front, but man that was painful. I had to pull out of second practice earlier because it was hurting. I knew it wasn’t going to be fun or easy but that’s racing, sometimes you’ve got to buckle up your jeans and go after it. It’s a long way out, but the only thing keeping me going is this championship so we’re going to do whatever we can… These Atlanta fans are awesome so that helped [me] fight through it.”

When asked about the physical riding with Barcia, Tomac said after the race, “Just battling. If I get bumped I’m just going to bump back. That’s the way it is. It might have been a little bit more of a hit but really I’m just like, just kinda giving it back. Tight track tonight, that’s what leads to those situations. Really hard just to make the pass stick so you had to go inside on the bowl turns, that was really the only spot tonight. I was in a hurry, Kenny was out front, and that was all I could do. The one with Blake [Baggett], that one was, I didn’t mean it to be that bad. I thought I had good momentum to slingshot from the outside to in, and then he was already coming down so… just the tight track makes it really hard to make moves. So that was that. Fortunately, I got back to fourth and that was it.” 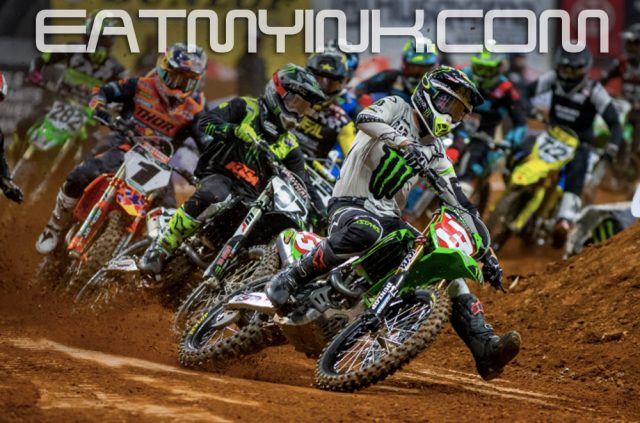 Tomac scored his first pole position of the season by setting a time of 50.294 seconds, marking the eighth time in nine races a Kawasaki rider has earned the pole position in the 450SX class.

As the gate dropped on the second heat race of the night, it was Tomac’s No. 3 KX™450 rocketing out the gate, grabbing the holeshot and checking out from the competition. Tomac crossed the finish line with an a nine-second lead to take the heat race win.

“The main event didn’t go as planned, but the good news is we live to fight another day and line back up next weekend at one of my favorite tracks, Daytona. There are still positives to take away from today; we were fastest qualifier, won our heat race, and we never gave up in the main event, and battled hard all the way to the very end to salvage as many points as possible. We are going to put this race behind us and be ready to rock next week in Daytona!”

The Atlanta win bodes well for Roczen – the winners of the last five Atlanta Supercross races have gone on to win the championship; 2015 hosted two Atlanta events, and it was Mountain Motorsports, cbdMD, CR22 Racing’s Chad Reed who won the first. That will go into the history books as Reed’s final Monster Energy Supercross win unless he grabs one more in 2020, his final year contesting the series.

In the Eastern Regional 250SX Class, GEICO Honda’s Chase Sexton brought home his second win of 2020, making it two in a row and breaking the title points tie, but the win wasn’t easy. It was Rockstar Energy Husqvarna Factory Racing’s RJ Hampshire who crossed the holeshot line ahead of the pack, but he was under pressure from the start from Sexton directly behind and opening-round winner Monster Energy / Star Yamaha Racing’s Shane McElrath right with them in third place.

Just over two minutes into the 250SX Class Main Event McElrath pushed into second, but in less than a lap Sexton had re-grouped and jumped back into the spot exiting the sand section. Sexton wasted no time getting back on Hampshire’s rear wheel; after some aggressive racing the previous weekend, fans anticipated aggressive racing in Atlanta. When Sexton made the move just prior to the half way point there was contact but no take-out attempt. A few laps later a mistake from Hampshire, also at the sand section exit, allowed Sexton a little breathing room as Hampshire and McElrath went to battle. Hampshire kept his composure and the position to finish second.

About the track and the battling, Sexton said, “It was tough. It was really hard to pass out there. The track was pretty one-lined. Had a lot of lines but one really good line. RJ was riding really good, he wasn’t making any mistakes. I was kinda waiting for a mistake and I just had Shane behind me and [thought] ‘I gotta make this pass.’ And I saw [RJ] case that triple a little bit and I just dove to the inside. Didn’t really want to hit him but he committed to the corner and I was there, so it was good to get that pass and then just kinda try to get away, ride my own race. And it was good. I didn’t really feel that good all night, but we got it done.”

Hampshire is hungry for a win. “Like I said, each week we’re going to continue to get better. That was a good glimpse [of a win], got that holeshot, just felt good, man, found a good flow.” Regarding the contact, Hampshire said, “All is good… Hey man, we’re out there racing for more than just a couple hundred bucks, so I want to win.”

McElrath was not happy with third, “It was a rough Main all together. Just had a few problems. I actually locked bikes with RJ going into the first corner and it bent my clutch down a little bit. And just struggled finding a flow that time. I’m pretty disappointed with my riding. I was trying as hard as I could I just wasn’t flowing and so it was really tough, really disappointing… It’s good but we’re going to have to do better than that.”

The home race for Pro Circuit’s Jordan Smith was just what he needed to bounce back from his ride in Arlington. The familiar Georgia clay was a welcomed sight for the rider who also trains in the Peach State. Smith got a good start and settled into fifth behind his teammate. He waited for the right moment and was able to get around. The front runners had charged already at that point, but Smith came away with a solid ride and his best of the season in fourth.

“It felt good to be so close to where I train and grew up,” said Smith. “I was ready to breakthrough and have a race track that I was meshing with. I wish I could have kept the front guys closer, but we’ll take it one step at a time and make our way onto that podium.”

Sexton is now the sole owner of the Eastern Regional red number one plate after three rounds of that series, but once the Atlanta points were tallied the 450SX Class had a shared points lead between Tomac and Roczen. All the racers will resume the battle next Saturday night as the Monster Energy Supercross series heads to Daytona International Speedway in Daytona Beach, Florida.

story and photos courtesy of Supercross, Pro Circuit, and Kawasaki