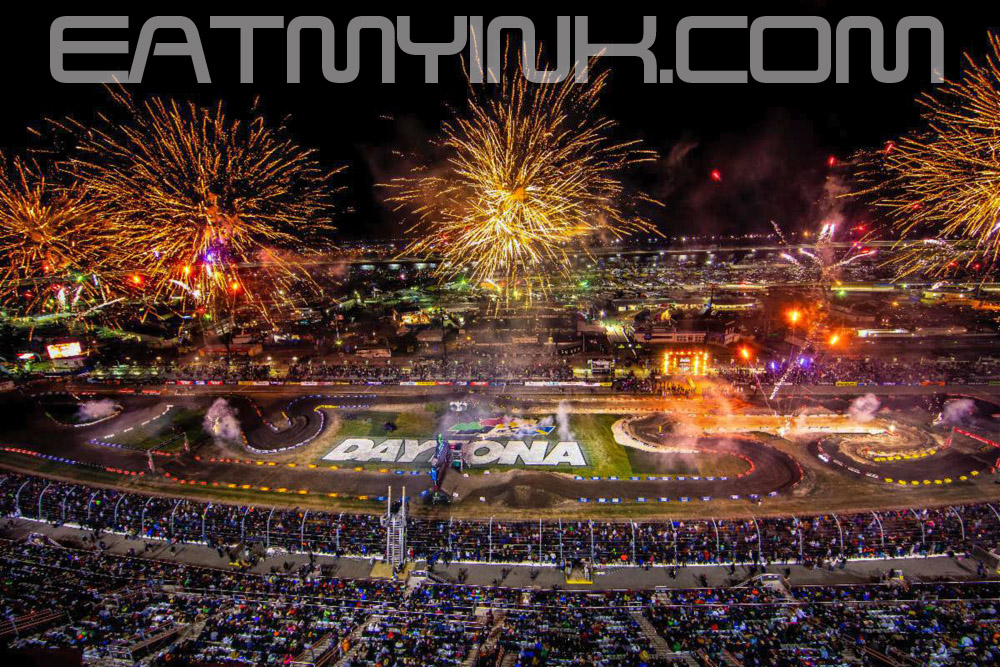 Two racers went into round ten of the 2020 Monster Energy AMA Supercross season tied in points, but it was Monster Energy Kawasaki’s Eli Tomac who emerged the victor at the 50th running of the Daytona Supercross at the Daytona International Speedway. The win gives Tomac a three point lead in the championship points over Team Honda HRC’s Ken Roczen.

Tomac kicked off the event with top speed in qualifying, posting a fastest lap time of 1:09.3 in the 450SX class and earning his second pole position of the season.

450SX Heat 2 saw Tomac in third out of the gate, where he battled for the lead as well as battling the challenging track and would go on to finish in third.

At the drop of the gate for the 450SX Class Main Event, Rockstar Energy Husqvarna Factory Racing’s Jason Anderson grabbed the holeshot but only held the lead for three corners before Roczen got by and immediately pulled out a gap on the field. In less than a lap the Honda rider had nearly four seconds on Anderson.

Tomac found himself in sixth position as the field rounded the unique first corner and quickly went to work to maneuver his way to the front.

Tomac was pressing hard for a pass on defending champion Cooper Webb on the Red Bull KTM. Webb held off the early charge and the two previous 2020 winners moved forward together. Eight minutes into the race, Cooper reached second, and three and half minutes later Tomac was into third.

Then Tomac turned on the speed he’s known for. He got around Webb then quickly erased Roczen’s four and a half second lead. With less than two minutes and a lap to go Roczen had a light tip over in a deep-rut turn; Tomac rode around and into the lead and held on for his fourth win at Daytona and his fifth win of the season. It earned him a three point advantage over Rozcen and broke the championship points tie the two riders had when the racing began. 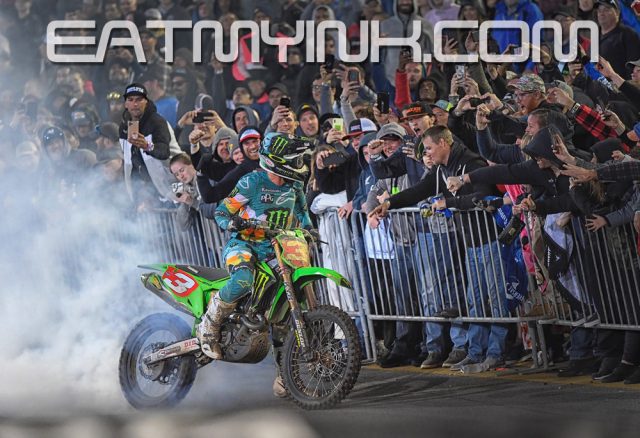 “I’ve always loved racing at Daytona,” said Tomac. “I have fun out here and it’s special having the fans so close and loud by the track. I had a positive attitude all day and just kept that energy rolling into the night show. Truthfully, I really thought it was a long shot to win the main as I was riding around sixth in the first lap with some tough contenders in front of me. I had some good momentum in the sand and a few other sections though, so I was able to put in some solid laps and begin making moves, giving it everything I had.”

A skirmish between Monster Energy Pro Circuit Kawasaki’s Jordon Smith and Monster Energy/Star Yamaha Racing’s Shane McElrath allowed Marchbanks to gap the field almost immediately. The second-year racer then rode like a calm and collected veteran and maintained over a two second lead for most of the race.

The race became a nail-biter in the final laps as defending champion GEICO Honda’s Chase Sexton closed in on the Kawasaki rider’s rear fender, but Marchbanks kept his cool and held the lead until the checkers. The Utah native became the first racer from his home state to take a supercross win.

“I’m on cloud nine right now,” said Marchbanks. “I’ve thought about this for a long time – what it would be like to win – and it’s better than I could have imagined. It’s especially cool to get a win at Daytona. It’s such a historic race. I’m thankful that the team has been so supportive and knew I had what it takes. I finally got a great start and can’t believe we went wire-to-wire. We’ve been working so hard and I can’t thank the team enough for everything they do to help me get up here on the podium. This win is for them.”

Teammate Jordon Smith was following right behind his teammate in the main event before going down and was forced to retire early. The day started out well for Smith who qualified sixth and went on to finish second in his heat race. In the main event, Smith tucked in right behind Marchbanks on the start at the front. A few corners later, he collided with another rider, going down and tweaking his knee. Smith was forced to call it a night, but is hopeful the tweak isn’t serious and will be evaluated this week.

Next weekend Monster Energy Supercross heads to another city with a racing heritage: Indianapolis. Lucas Oil Stadium hosts the racing in Indianapolis, Indiana, where the top racers are sure to scrap and battle again for every point.

story, videos and photos courtesy of Supercross and team reports