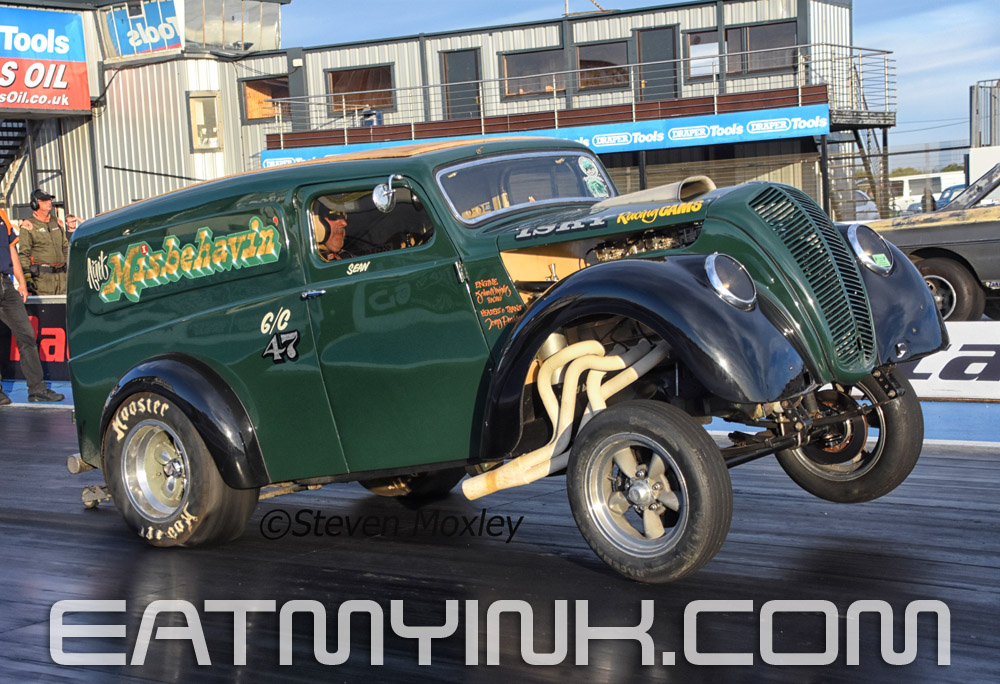 The 2019 NSRA Hot Rod Drags at Santa Pod Raceway were blessed with warm, sunny weather over the entire weekend. This was the final round of the Outlaw Anglia and Gasser Circus.

Twenty-Five cars entered the final round of the 2019 Outlaw Anglia Championship.

Scotty Crookston was the points leader coming into the event, with reigning champion Colin Millar in second place and Simon Barlow third. They were the only drivers who could win the championship.

Scotty Crookston was next at 7.487-177.85 and Steve Wells fourth with an 8.191. Newcomer Dalton Scarlett has got the ex-Mark Pointer Fordson and didn’t have the Pro-Charger fitted to the engine. Adam Cuthbert was on the bump spot 9.830.

Rob Nixon was first alternate for Mat Cooper. Ronnie Mercer almost took the Christmas tree out and crossed into Nixon’s lane. Barry Crookston had the same thing happen to him when he crossed into Rob Stone’s lane. Scotty Crookston beat Gary Hill. Barlow ran 192.96 against Cuthbert to back up and set a new speed record of 193.72. Millar eased pass Scarlett.

Millar beat Nixon in round two. Stone broke at mid-track against Crookston, Barlow took the winlight against Jeff Meads, and Steve Wells beat Phil Drewitt’s best run of the weekend of 9.506.

The other semi-final was a championship decider. Crookston led from start to finish at the lights with a 7.662 to an 8.069 for Millar, and became the 2019 Outlaw Anglia Champion.

Barlow soloed to the winner’s circle after Crookston shut off in the final.

This was a race for the remaining cars that entered the event.

O’Connor was a no-show, so Turrington had a bye to the final where he would face Bird in the final. Shane Bird went on to win the event.

Four drivers were in the hunt for the 2019 Gassers Circus Championship.  That went down to three when Steve Matthews did a huge wheelie and damaged the car and was out of the show. Sean Milsom, Martyn Hallam and Brian Gibson were left to fight to out.

Gibson had a bye run into round two. Tony Pearson redlit against Hallam, and Milsom beat Nick Brooke-Langham.

A bizarre race saw Barton break off the start line against Ray Irish, who broke out at the finish. Barton took the win.

Gibson ended his championship hopes when he redlit against John Grant. Milsom beat number one qualifier Holmes and Hallam beat Ted Booth, who broke out. Barton also broke out against Ray Turner.

Grant took the winlight over Turner in their semi-final.

In the final, Grant had a .001 light and led from start to finish to beat the new champion Milsom.

Super-Charged Outlaws do not run an elimination ladder.

Christian Zulauf pulled some great wheelies and eventually damaged his wheelie bar, and ran a best of 7.28-167. Aaron Windridge went 7.917.

Roy Wilding was driving the restored altered driven in the ‘80s by Sue Coles and dipped into the sevens with a 7.927.

Des Taylor ran his first seven in his altered at 7.982. Keith Freeman ran his first nine 9.974 and Jeff Hawksworth debuted his new slingshot and ran a best of 10.023-145. Bill MacDermid did two huge wheelies off the start line and damaged his sump.

In the pits was a stunning new slingshot constructed and built by twenty year-old Luke Felstead. His father Bill assisted in the build.

The engine block is out of a marine boat and is Iron with alloy cylinder heads. It has a Crower Glide direct drive with a Lenco reverser. Luke and Bill made the alloy body panels and Luke sprayed the Cornist Cream paint.