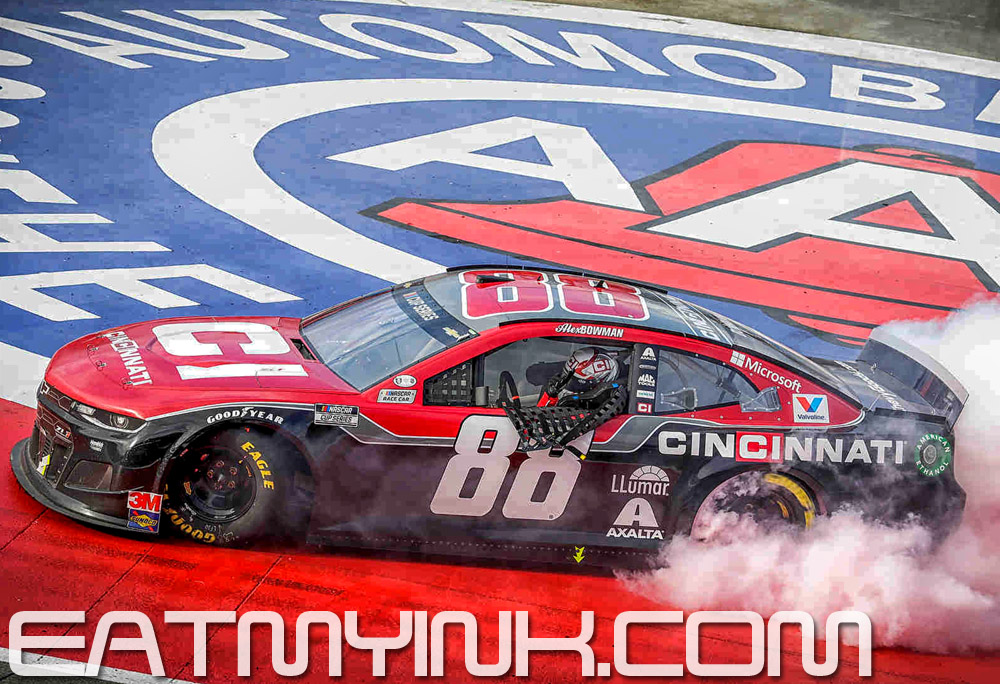 Alex Bowman collected his second NASCAR Cup Series career win in the No. 88 Cincinnati Camaro ZL1 1LE at Auto Club Speedway in Fontana, California. Bowman was fastest in both Friday practice sessions, qualified third on Saturday and then led 110 laps of the 200 lap/400-mile race on Sunday.

The victory was Bowman’s first in the 2020 season, his first win in five races at Auto Club Speedway, and first for the new 2020 Camaro ZL1 1LE, which was introduced in February at Daytona Speedweeks. The win also marked the 787th for Chevrolet in NASCAR’s premier series, and 15th at this track for Team Chevy. Additionally, it was the 257th NASCAR Cup Series triumph for car owner Rick Hendrick.

“The first one (win) was a real enjoyable experience, and then we sucked for six months,” said Bowman. “We started this year so strong. I feel like I’ve got a lot on my side that I’m doing better. My life has gotten a lot more organized than it was then.

“Greg (Ives, crew chief) and the guys are just on point. We’ve unloaded the last two weeks and I don’t think we have had to make a change to the race car from the way it came off the truck. That makes my job a lot easier. I’m just so proud of this team. Everyone at Hendrick Motorsports. Hendrick horsepower under the hood. The whole shop back home. They work their butts off. We’ve put a lot of effort in this new car and it is obviously working out really well.”

Kyle Busch (Toyota) was second in the order and Brad Keselowski (Ford) finished fifth. Other Chevrolet drivers with strong finishes included Kurt Busch, who was third in his No. 1 Monster Energy Camaro ZL1 1LE, Chase Elliott, who was fourth in the No. 9 NAPA Auto Parts Camaro ZL1 1LE, and seven-time NASCAR Cup Series champion, Jimmie Johnson finished 7th in his No. 48 Ally Camaro ZL1 1LE.

“We did really good to balance our Monster Energy Chevy on short run speed, and long run speed,” said Kurt Busch. “Being able to maneuver on restarts is something that I’ve been harping on. Making sure we get better when we’re in dirty air. And to come away with a third place finish, that gains a lot of points back for us and I feel really good about the way the car handled this weekend. So, whatever we can do to baseline this, is what we’ve got to do moving forward.”

“This team is going in the right direction,” said Johnson. “I know in my heart what I am capable of and what this team is capable of. It’s just taken a little bit to get the right people in the right places, and rebuild and get this Ally Chevy exactly where it needs to be. We just couldn’t adjust this car on the pits stops quite enough to get the tight out of it. It was really competitive and racy at the start of a run and then we would fade at the end. At the end, I thought I was going to blow a tire, I think I had cords on the fronts and I thought I wasn’t going to finish the race. So to salvage a top-10 out of it and two thirds in the stages, so we are headed in the right direction. I want to thank the fans here in California. There have been some great vibes all weekend.”

The NASCAR Cup Series season continues next weekend at Phoenix Raceway with the FanShield 500 on Sunday March 8 at 3:30 p.m. ET. Live coverage will air on FOX, MRN and SiriusXM NASCAR Radio.