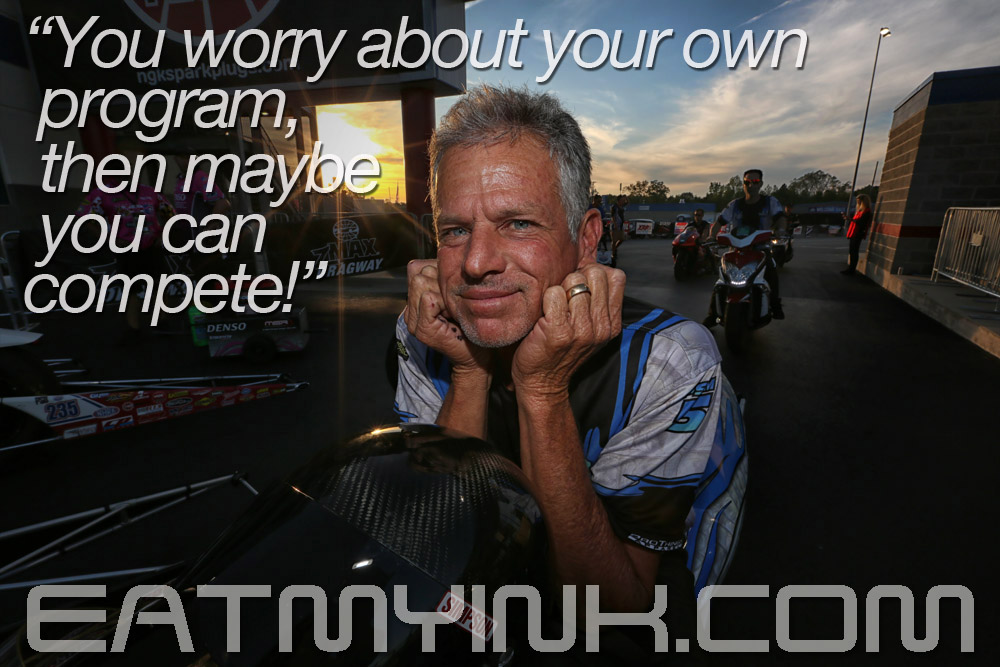 My phone started ringing about a month ago. An NHRA Pro Stock Motorcycle (PSM) insider called me with a rumor about a Suzuki engine development program in North Carolina for a three-bike team.

So I called up Lon Moyer at Competition Engine Services (CES) in Advance, NC. I said “I heard this and I’m trying to think of who in North Carolina has the capability to do such a thing, and I thought of you. Do you know anything about this?”

“I can’t talk about that,” said Moyer.

Moyer’s company has a vast background in NASCAR and Pro Mod car engine development. CES is quietly legendary for being the masterminds behind the Junior Pippin power that pushed Chip Ellis to number one qualifiers and a home track win at zMAX Dragway a few years ago. In addition to the power of free-flowing heads, PIppin motors had durability with one piece cranks long before S&S brought the Gen2 to market. There isn’t much in the way of engine development that CES can’t do if the project is properly funded.

Then I called White Alligator Racing’s Tim Kulungian. WAR is slated to get their third Suzuki on track this season, so I asked Tim about this rumor and he said “That’s not something I’m willing to talk about.”

At Gainesville this weekend, Moyer will be a part of the WAR team. Hot on the heels of NHRA approving Suzuki 4 valve heads from Monster and Vance & Hines—opening up a new frontier for Suzuki engine development—you can bet the pits will be buzzing.

“You know what you can tell them?” WAR team boss Jerry Savoie said about the trailer buzzbirds. “You know, ‘You worry about your own program, then maybe you can compete!’ Tell them that I said that. Tell them Jerry said, ‘If people would worry about their own program more than they worry about his, maybe they could beat him!’”

Moyer came out to the WAR trailer a couple of times last year, and that’s what got the rumor mill spinning. “He was showing Tim a few tricks on the computer,” said Savoie. “In every game, you know, the more knowledge you get, the better you are, and he helped us. But people start assuming, and presuming.”

“Here’s the bottom line,” said Kulungian. “People can see something from the outside and it may look a certain way. But, you know, there’s not a lot of people that have the experience when it comes to how to how to navigate a drag racing motorcycle, with engines that are built like these, from the starting line to the finishline.

“Lon is going to be helping me inside the trailer. His responsibilities are going to be working with the Motec ECU and implementing changes.

“And he’ll probably be responsible for one motorcycle at first, and then we’ll kind of get the feel for things and then maybe we go from there. But his responsibilities are at the venue, at the racetrack. That’s what he’s doing.”

And it’s true that WAR is suddenly shorthanded this year and going through a complete hands-on crew overhaul. That’s why, Kulungian said, that John Hall will not be competing on a third bike (actually on Jerry’s old bike) with Savoie (on a brand new bike), Karen Stoffer, and the team at the Gainesville PSM opener.

“We’ve currently employed three lead technicians,” said Tim. “One of them has Pro Stock Motorcycle experience, the other two don’t. So the reason for postponing John’s start date was the lack of experienced technicians.

“And it is unfortunate. I really didn’t want to make that phone call (to Hall). It was not a good phone call to make, but it was a phone call that had to be made.” Kulungian takes his responsibilities of fielding safe, competitive motorcycles very seriously.

“Here’s the deal,” said Savoie. “Last year, you know, GT (Tonglet) came to a couple races and he was helping Tim on the computer and it’s good to have two eyes and ears and everybody learning and whatnot. Well, GT kind of dropped out and decided he didn’t want to go to the races. So, it left us in a jam and we brought my brother (Cory) in to fill in until the end of the season.

“We’ve been searching, and we talked to Chip, and (he told us) Lon knows the Motec really, really well. He’s been using Motec for 15 years.

“So Tim called me and said ‘Hey man, what do you think about Lon coming on board and helping us in the trailer and tuning and whatnot?’ I said ‘Hell, I don’t think it’s a bad idea.’ I always got along good with Lon. He’s very private, very quiet.

“So Tim talked to Lon and they came up with a solution, and he will be helping tune the bike. And with three bikes, Tim’s got his ass full.”

Kulungian admits that attempting to field three bikes may have taken a day or two off the end of his life. “Three has been very interesting and we haven’t even got to the racetrack yet,” said Kulungian.

“And I really needed somebody that has Motec experience, understands internal combustion engines that we use, with this particular fuel, and could also be an asset that could add another perspective on how we do things.

“I always try and surround myself with people that are smarter than me in certain areas, and I think that’s why this team has been so successful is because we just have great people around us.

“The mind can run thousands of places, around thousands of scenarios. But what I’m saying right now is, Lon’s coming to the track. He’s helping with the tuning of these engines, and he’s going to be an asset.”

For all practical purposes, Vance & Hines is currently the only viable source for a competitive Suzuki PSM motor, and Savoie has had a checkered history with V&H. When he first started racing the class it was with the highly competitive Don Schumacher Racing equipment he purchased. Savoie and his tuner-at-the-time, Mark Peiser, would openly taunt V&H and their Harley program.

But WAR with Peiser couldn’t keep up with the development pace at V&H. He and Savoie parted ways and WAR became a V&H customer. Since then, Jerry’s notched 12 wins, a championship, and two near-championships.

Mostly satisfied, Savoie’s feathers can still get ruffled, like the time V&H fielded a third bike in the 2018 Countdown. Savoie put out a press release expressing his dissatisfaction that V&H would employ a blocker against their own customers, and V&H’s Eddie Krawiec replied with an agitated rant in the pressroom at the next event. Now V&H fields three bikes full time.

But Savoie also prizes his relationship with Krawiec. And while Junior Pippin was motivated to spend obscene amounts of his dump truck empire money with Moyer and CES to defeat the Vance & Hines Harley-Davidsons with his own equipment, would Savoie go down that same path with his alligator farming fortune?

“Vance & Hines has been working with our program for many years,” said Jerry. “I’ve never been on the short end of the stick. They’ve always helped us.

“With Eddie and Andrew (Hines) and Luciano (Santana) and Blake (Ritter) and everybody back in the shop, they’ve always, always supported us 100%.

“So Vance & Hines is still our engine builders. If people don’t like it, they can kiss my ass and mind their own business! Worry about their own shit, that’s what they need to worry about.”

“We have engines (being serviced) at Vance & Hines right now,” added Kulungian. “They provide an excellent solution.

“WAR definitely has an interest in the four valve engine and what Vance and Hines is building, and we believe they’ll build something pretty damn cool. It’s really fast, and so we plan on investing in that. No doubt about it.”

Kulungian then talked about more immediate issues the team faces rather than something as ambitious and long term as developing a full engine program.

“That’s a huge R&D project that requires a lot of money, a lot of resources. And we’ve got so many other things going on. I’ve implemented so many things to try and make what we have better, so we don’t have the same problems this year that we had last year.”

You might remember that this problem likely cost Savoie the championship when his bike wouldn’t run in the Pomona final against Jianna Salinas.

“We had problems with the ECU not knowing where the crankshaft and the cam were. So we’re trying to build a platform that’s a little more stable in that area. So the first thing we have to focus on is stability, and the ability to go up and start our motorcycle and have a running engine to compete with.”

Which would seem to put this matter to rest…and yet, there is no outright denial, is there?