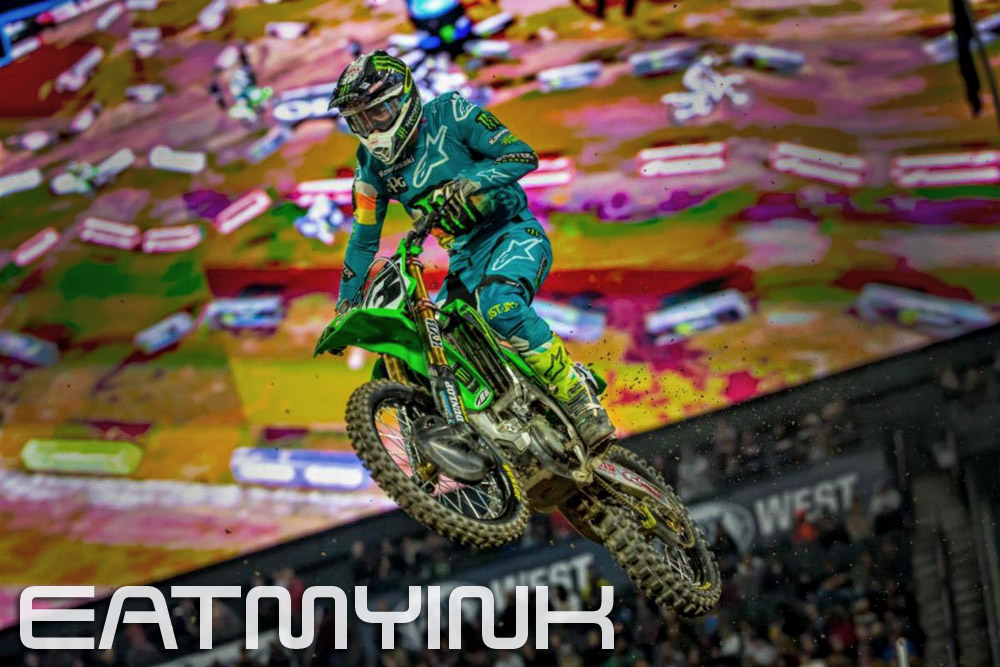 After a bad start that had him round the first lap in tenth place, Tomac got into his groove early and started turning the fastest laps and picking off riders quickly. On the 8th of 24 laps Tomac cut under last weekend’s winner, Team Honda HRC’s Ken Roczen. Tomac pulled a comfortable lead on Roczen while riders behind the two battled for positions.

Webb’s final push almost got him second place, but Roczen held the position and took over the championship points lead due to a ninth place finish by previous points leader—and Anaheim 1 winner—Justin Barcia.

“Today was the day we worked for all offseason,” said Tomac. “Things were just clicking all day, we qualified second coming into the night, and in the first heat race we were able to get out front early and just kind of set the tone for the rest of the night.

“In the main, I didn’t get the best jump of the gate, but I was able to find some good passing lanes and remained aggressive in the opening laps. The two sets of whoops and dragon back were so mentally and physically demanding, I believe that is where I was able to separate myself from the rest of the pack.

“All in all, I can’t thank my team enough, the whole Monster Energy Kawasaki crew for all the hard work this past week, it definitely paid off tonight. I am looking forward to Glendale next weekend and to race a Triple Crown. My first 450SX win came in Phoenix and the high-intensity Triple Crown format really suits my racing style.”

“Today was a bit of a rollercoaster ride for me,” said Cianciarulo. “I was able to qualify on top again, which always helps going into the night show.

“In my heat race, I was able to get out front but my buddy Ken (Roczen) got by and I settled into second. In the 450SX Main Event, despite my start, I felt like I was riding well and making good progress. I began to go forward and was able to make my way up to fourth, but unfortunately, I made some minor mistakes that cost me a better result.

“Sixth place isn’t where I want to be, but it is a long season and we are going to keep grinding. I am looking forward to the Triple Crown format next weekend in Glendale and the three gate drops we get to race.”

The racing was intense in the Western Regional 250SX Class.

Defending champion Dylan Ferrandis of the Monster Energy / Star Yamaha Racing team fought through the top riders to claim his first win of the season, though it included an aggressive pass that took GEICO Honda’s Christian Craig out of the race. After review by race officials, Ferrandis was fined $3000 to be held pending the completion of a one year probation.

Most of the 250SX Main Event was led by 16-year-old rookie Jett Lawrence of the GEICO Honda team. At one point, the rookie had more than a ten second lead. But a crash and a series of mistakes allowed Ferrandis to pass.

On the final sections of the final lap, Lawrence mounted a last attack, but he pushed too hard in the whoops and crashed just one corner before the checkered flag.

After taking his heat race win, Austin Forkner was confident he could translate that speed to the main event. He managed to squeeze through the first turn and start the main event in third. While holding a good pace for a majority of the race, Forkner caught an edge of one of the whoops and went down. He remounted to finish out the race, resulting in a 17th for the night. He is currently fourth in the standings, 22 points out of the lead.

“It was a tough one to take tonight after being in good position the whole race,” said Forkner. “The track was changing a lot during the race, getting slippery and the whoops broke down a lot more than we expected. Moving forward, I know I will do everything in my power to make sure I’m getting maximum points and go after that red plate. Next week will be interesting with the Triple Crown so we’ll see how that changes things up.”

Tomac and Ferrandis’ victories mark a different winner in each class, at each round, so far in 2020. The series heads to Glendale, Arizona next weekend for the first of the Triple Crown format events when racers compete in three Main Events for each class, with the combined best finishes awarding the event points.

story, photos and video by Supercross with edits by Tim Hailey