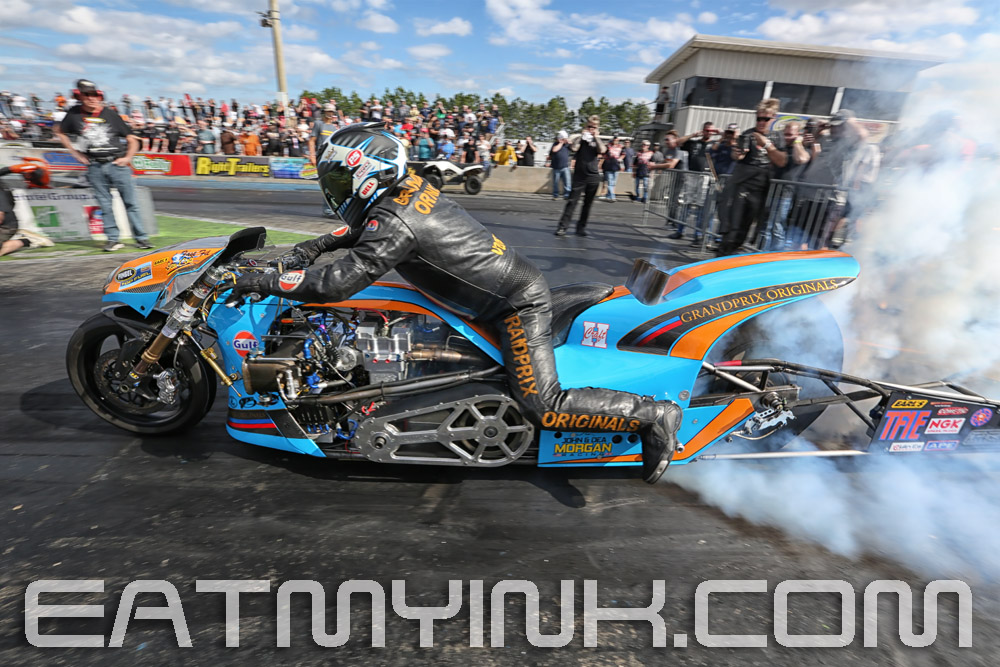 Top Fuel Motorcycles in the U.S. have followed the same basic design and layout for decades now, with the possible exception of the parked Alwine family bike that Korry Hogan rode.

The bikes in Europe, though, tend to stray from the standard build sheet a bit. And in the case of the King Racing Gulf Oil machine, even that somewhat standard looking machine goes off the grid once you look inside. “Three valves per cylinder compared to the standard 2V, an integrated manifold system, an Owens box compared to the usual B&J, an idler gear cam drive system compared to the usual full chain system, etc.,” said team principal, former (and occasional) rider Ian King.

According to Ian, the bike he helped develop is also the first inline 4 to run a BDK-only fuel system. “Most other teams said that would not work, but most others have now followed with the modified BDK all-valve. We ran a modified MSD digital retard system when the others ran the basic six shooters, but have now moved on to Power Grids. And we ran a parachute system—the first on an I4 bike outside of Australia.”

So it is perhaps not a surprise that the Gulf Oil bike (now owned by Filippos “Fast Fil” Papafilippou) tried a fairly radical departure to start 2019. As part of a weight saving exercise, the team swapped out their planetary transmission for a jackshaft.

King talks about the operation in this video:

“The direct drive set-up was part of a weight reduction program,” said team Engineering Manager Marius van der Zijden, agreeing with King’s stated motivations in the video. “Of course, it had the largest impact on the weight savings program.”

14.5 kilograms (about 32 pounds) of a total 40 kilos (a little over 88 pounds) shed were accounted solely by replacing the planetary transmission with a custom direct drive unit. 9.3 kilos (20.5 pounds) were lost by switching from an aluminum body to carbon fiber.

“It is obvious that removing the (trouble-free Scott Owens) transmission would be a rather easy way of saving considerable weight, however we were well aware that cutting good short times would be very difficult,” continued van der Zijden.

“I designed the direct drive unit so that it was a direct replacement for the transmission, without any chassis and/or clutch changes. In that way we could easy go back to the transmission set-up, even at the track should we want to.

“Should it work, we could make a more permanent set-up with an additional clutch plate. But that would require more drastic chassis changes.

“As we had no opportunities to try this set-up at a test & tune session, we could only test it at a fully prepped race event—which was our first EU championship round.

“Cutting our usual low- or sub 1.0 second 60 foot times was hard, but an even bigger problem was caused by the drastic change in center of gravity. At mid-track the bike was extremely loose and was certainly not the ‘friendly to run’ bike that we knew. In fact all passes (at the EU opener) were aborted.”

“The bike became violent,” said owner/rider Papafilippou. “Wheel speed picked up suddenly with spikes and made the bike scary.

“It showed that reduction of weight didn’t improve anything and reduced traction. (But) the general outcome is confusing. We can’t say yet if it will improve performance or it won’t. We got data to evaluate since more factors were affecting the overall performance, so we need to do some corrections and try again in the future.”

“The handling issues could be attacked, but that will require starting from scratch, designing and building a completely new bike from the ground up,” continued van der Zijden.

“Personally I have my doubts whether cutting low short times would be possible with a direct drive in a blown four cylinder application, even if it would be a dedicated set-up,”

“The best ET we did was 6.17 seconds, which was clicked off around 4.9 seconds,” “This might be the quickest ET of any blown four cylinder bike with a direct drive though?

“The only run I managed to keep longer throttle open,” added Papafilippou.

Fil has made riding dragbikes look easy—including winning the FIM Top Fuel Motorcycle title his first year ever on a nitro bike—since shedding two wheels only ten years ago.

“It all started in 2009 as bet against a group of bike riders,” said Papafilippou. “I was racing cars at that time and we were all drinking, joking, and teasing each other on a Saturday evening at a race in North Greece. They claimed that bike riders need skills, but car drivers just hold the wheel and step it to the floor.

“I explained at that time that a Pro Mod car might need more skills than a Pro Mod or Pro Stock bike—or at least the same. As a bet I told them that I would jump from a car to a bike in the 2010 championship and win the top bike class for that year.

“So I rode a nitrous Pro Mod bike in 2010 and set national records and won the championship.”

Fil took a couple of years away from racing after that, then in 2013 came back and raced on the FIM European circuit. To listen to Fil describe it, it seems that Greece is not just the birthplace of democracy, but also of no-prep drag racing. “Tracks are unprepped and it is a joke. I hold records of 7.0s in a car and 7.1s on a bike on every unprepped airfield in Greece till today.”

Papafilippou became internet famous in 2014 when he came off his nitrous bike at Santa Pod and landed on the wheelie bars of Steve Woollatt’s nitro bike.

And now Fil’s at the top of the 2-wheeled food chain. Two years in nitro, two championships, and experimenting with the tried-and-true formula on what is currently the second quickest motorcycle of all time. The future looks exciting for the Gulf Oil team.

story, King interview video, and photos (except where noted) by Tim Hailey 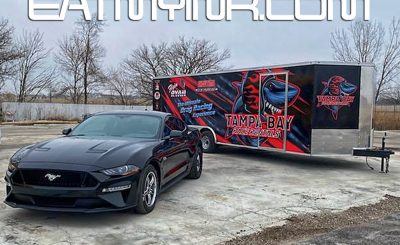 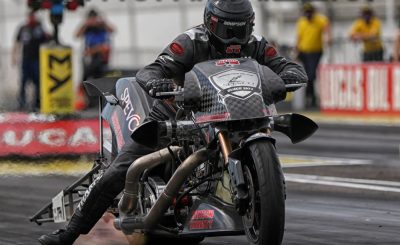 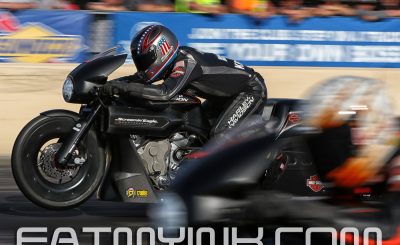