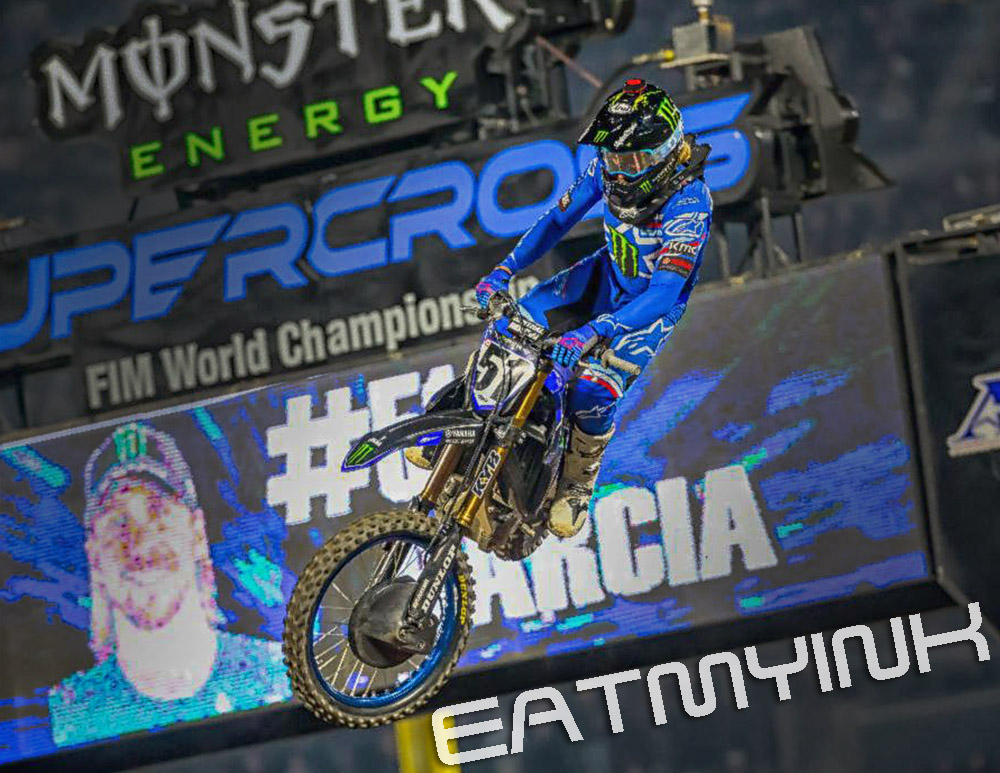 Monster Energy AMA Supercross twisted the throttle on the 2020 season on a challenging track inside Anaheim’s Angel Stadium in the opener. The track’s tight corners added a level of unpredictability to the racing and instigated several lead changes in both classes in front of the sold out crowd of 45,050.

Monster Energy Yamaha Factory Racing’s Justin Barcia took the first win in the 17-race series, just as he did in 2019, but 450SX Class rookie Monster Energy Kawasaki’s Adam Cianciarulo made him earn it in a battle that had both riders pushing their limits for the 20 minutes plus one lap race.

In his first-ever 450SX start, Cianciarulo was on the move instantly, reaching fourth place with an aggressive move through the first set of whoops and setting his sights on the front. In less than four minutes, of racing Cianciarulo had put his Kawasaki into second place and set his sights on Barcia.

Nearing the halfway point, Barcia made a mistake that took him briefly off the track. Cianciarulo slipped past, quickly pulled nearly a two second lead while past champions and pre-season favorites battled well behind. Cooper Webb, riding with a flu, put his KTM into third place just past the half way point.

Then, with under six minutes of racing left on the clock, Cianciarulo got bit by the track trying to seat bounce out of a corner. He lost traction and drive and came up short and sideways on a landing. He managed to keep the bike off the ground, but Barcia capitalized and rocketed back into the lead, where he would keep his Yamaha until the checkered flag waved.

It was also a big night for another racer, though for a different reason. The day prior, Mountain Motorsports / CR22 Racing’s Chad Reed announced to the U.S. press his decision to retire after 18 years of Supercross racing. 2020 will be Reed’s final year in Monster Energy Supercross competition, and the race at Anaheim marked the milestone 250th 450SX Main Event start by the veteran. It didn’t come easy: after getting tangled in a first turn crash in 450SX Heat Race 1, Reed was forced to qualify through the 450SX Last Chance Qualifier (LCQ). With a bad starting position, Reed found himself at the back of the pack, and only reached 18th place on the night.

After his win, Justin Barcia said “I busted my butt in the off-season and worked so hard. That was just all strength through that whole race. I’ve definitely matured a lot, developed as a rider a lot, that was an incredible race.

“I didn’t want to win this race!” Barcia laughed. “My goal was to get out of here safe, healthy, and I just want to be on the podium a lot this year and be in the fight for the championship because I haven’t been able to do that.”

Adam Cianciarulo commented on the difference in race duration with the move up to the 450SX Class. “The races are a little bit longer, and even though 250 and 450, it’s 15 and 20 minutes, that extra six or seven laps we do feels like a lifetime. So [I was] just trying to adapt to the track out there, and yeah, Justin made a mistake and went off, [then] squared up under me and I thought we were both going to die off the next rhythm sections. Man, it was so much fun racing him. Then I spun out [jumping] out of the triple there; and thank God [that] God blessed me with some long legs, I was able to save that. [But I] knocked the wind out of myself for a good 20-30 seconds.”

In the Western Regional 250SX Class, Monster Energy Pro Circuit Kawasaki’s Austin Forkner was the first rider to the holeshot line, but Justin Cooper was around him immediately. GEICO Honda’s Christian Craig sat in third and Cooper’s teammate, Western Regional 250SX Class reigning champion, Monster Energy / Star Yamaha Racing’s Dylan Ferrandis was back in seventh. Forkner looked ready to return to racing with a win after 2019 was cut short by an injury while leading the points in the Eastern Regional 250SX Class Championship; he grabbed the lead back within the first four laps. Cooper stayed close, but not within striking distance, while teammate Ferrandis sliced his way through the pack. Just before the midpoint Ferrandis made his way into third as, five seconds up the track, Cooper closed in on Forkner’s rear fender.

Forkner held off Cooper’s charge, but then with three and a half minutes plus one lap of racing to go, Forkner got off-line through a rhythm lane and nosed his front wheel into a Tuff Blox. He hopped off the bike as it came to a stop while Cooper jumped past. In remounting, Forkner got turned around on the track and cut through to the next lane to resume racing as Ferrandis raced past into second. The infraction netted Forkner a two-position penalty.

At the line, it was Yamaha’s Cooper taking his first ever 250SX Class Main Event win. Ferrandis took second, and Forkner crossed the line in third, but after the post-race penalty was awarded fifth position.

Cooper was elated on the podium after his first Supercross win. He said of the pass for the lead, “The track was tough, we were all making mistakes, but I was trying to pressure him into that mistake right there. I ended up being patient and working out. Man, I’m so proud of myself for riding like that tonight and just… Before the gate dropped, I was like, ‘How cool would it be to come out here and win A1.’ This is my dream to win it here is so much bigger than any other place that I could’ve won it. It’s honestly like, just looking up into the lights right now it’s like I’m dreaming. It’s incredible. The feeling that I felt when I went over the finish line is like nothing other. I could just live on that adrenaline right there.”

Ferrandis, the reigning class champion, was happy to put the Yamaha team 1-2 at the opening round of 2020 but was less happy about his early race pace, which kept him out of striking distance at the end. After the race the Frenchman said, “My start and then traffic the first couple laps… I saw the guys in front and when I go for the pass and make some small mistakes. I rode a little bit tight, I think, in this moto. But it’s fine, it’s only the first round, and last year I started the season the same way.”

The man who lead the majority of the race, Forkner, mentioned that his break from racing prior to the night was his longest ever; even before learning of his 2-position penalty he was clearly disappointed in his results. “I had that one [the win]. Obviously, you guys saw what happened, I just kinda landed, just kinda got a little deep and shot off to the right just a little bit, and we were already landing pretty close to the edge and the Tuff Blox, and it was just – end of story. That was my fault, you know, I’ll just own up to that one. I felt like I had that one in the bag and that was leading to a pretty solid race. I think I would’ve held off and got the win.”

Next weekend the Monster Energy Supercross series heads to St. Louis for round two. It’s a return to Missouri after not having the venue on the calendar last year.

story, photos and video courtesy of Supercross with editing and additions by Tim Hailey