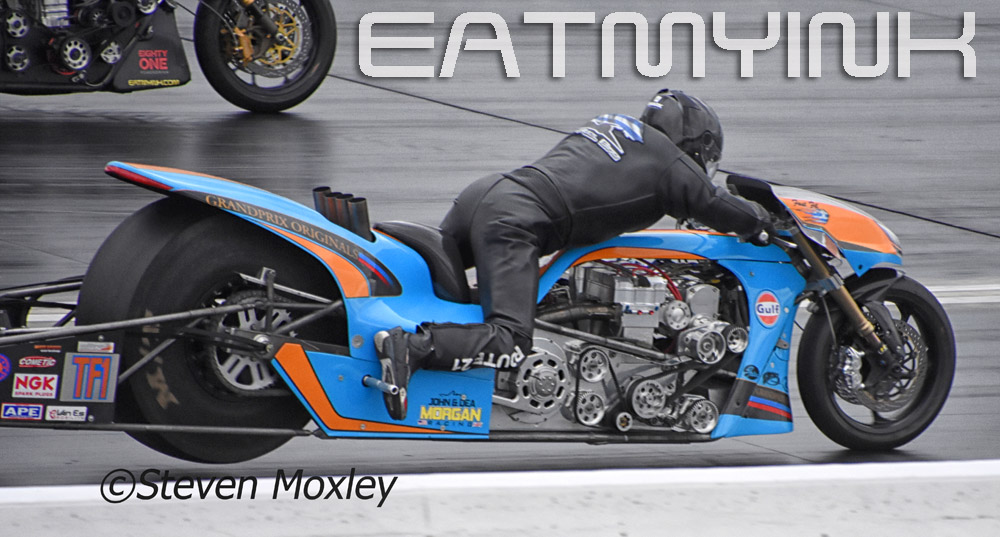 The final round of the 2019 European FIM Championships at Santa Pod Raceway will always be remembered for the stunning string of records laid down by Top Fuel Bike champion Filippos Papafilippou and the Gulf Oil Racing Puma (above).

The event was disrupted on Friday by rain during qualifying between sessions one and two. Only Super Street Bike completed Fridays two sessions. Three sessions were run for Top Fuel Bike, SuperTwins and Pro Stock Bike on Saturday.

With the good weather conditions on Saturday and Sunday, new championship records were set and many riders recorded their personal bests.

Rikard Gustafsson got Top Fuel Bike off to a cracking start with a 5.966 out-of-the-trailer pass, but on Saturday he broke a crankshaft. One was sent over from Holland and the team worked late to get the bike ready for eliminations.

Reigning champion Filippos Papafilippou had everyone talking at the track on Saturday after back-to-back 5.663 and 5.662 to become Europe’s quickest Top Fuel Bike rider, and also set the European FIM Championship ET record (5.662). He also ran a personal best speed of 246.74 miles per hour.

Making his debut on the world’s only three cylinder-powered Top Fuel Bike, Al Smith ran a career personal best of 6.275 at 194.70 mph.

Fourth spot was Steve Woollatt. He was running a different motor and looking for a baseline, and ran a best of 6.332-195.40.

Leeks redlit against Papafilippou in round one, and Richard red it against Woollatt. Gustafsson ran 6.001 to beat Borg, who had smoke from his motor in the shutdown area. Smith eased past Pettersson, then had a bye to the final when Gustafsson was a no-show in the semis.

Smith was a no-show for the final, so Papafilippou and the Gulf team turned the settings up and it resulted in tyre smoke at 30 feet.

Marcus Christiansen dominated SuperTwins at the event. He was number one qualifier with a 6.299 to become the first European rider to run 6.2 seconds with a normally aspirated V-Twin motor. That run also made him the 2019 European FIM SuperTwins champion.

Neil Midgley had a fuel pump issue which damaged the cylinder heads, and he ran 7.373. Allan Davies was on the bump spot at 7.616 with damage to piston and barrel.

Christiansen had a bye in round one. Jager altered the ignition and fuel set-up, which resulted in a 6.937 to beat Boer’s 7.072. Davies went to the semis when De Haas slowed at mid-track, and Midgley beat Laseur.

Christiansen turned the wick up and ran 6.233 to back up the 6.299 for a new European FIM Championship ET record, to a losing 7.077 from Jager. Davies was a no show in the other semi-final. Christiansen won the final over a troubled Midgley, 6.338 to 8.447.

Martin Bishop had to build his motor on Wednesday and Thursday due to parts being delayed. Bishop then ran 7.375 to edge Len Paget 7.393 for fourth.

Bertrand Maurice was not on form with a 7.574, and Simone David—who has had a troubled season—ran a personal best speed of 164.85.

Koskinen’s championship dream ended when the bike broke at mid-track against Maurice. Fredlund had a bye and was crowned the 2019 European FIM Pro Stock Bike Champion. Paget redlit against Bishop and David wasted his best run of the weekend (8.027) when he redlit against Newbury.

Both Bishop and Maurice broke in the burnout box against their semifinal opponents.

Steve Venables was another rider in dominating form at the European Finals. During qualifying, Venables ran a personal best ET and set new European FIM Championship ET and speed records of 6.806 at 216.99.

Daniel Lencses’ 6.941 made him one of many who set personal bests.

Garry Bowe ran a 7.001 in the dark on a very tricky track at night on Friday. He then ran 6.973 p/b, just edging out Graham Balchin, who ran his first six-second pass with a 6.977 to become the first Kawasaki ZX12 in the world to run a 6 second pass.

The only rider who could stop Venables was Alex Hope, but he had to change motors on Friday and struggled in qualifying to a 7.458. Knut Moeller ran a p/b 7.658 and Erich Gruber was on the bump spot.

Dave Thomas was first alternate for Gruber and faced Venables in round 1, who ran 6.928 against Thomas’ best of the weekend—8.219. Mark Hope ran another p/b 7.306 to beat Graham Dance. Balchin beat Margot Schmidt. Mark Dainty ran a p/b speed of 198.11 but lost to Mead. Lencses beat Clemens Walliett. Rick Stubbins redlit against Richard, who ran personal best figures of 7.371-198.04. Bowe beat Moeller and Alex Hope’s title race came to an end against Lund’s 6.977 at a p/b speed of 210.94.

Best race of the day saw Mead win on a holeshot with a p/b of 7.022 to a quicker but losing 6.983 from Balchin. Richard ran another p/b 7.347 to knock out a slowing Lencses’ 8.140. Bowe struggled off the start line and watched Lund take the winlight.

Rain and cool temperatures on Friday made the track not suitable for quick times for the fuel cars, but the weather picked up for the two remaining days.

Newcomer for this season in Top Fuel Car—Maja Udtian—set a new European FIA Championship ET record 3.816 at the previous round in Tierp. During qualifying on Saturday at Santa Pod, Udtian ran 3.806 to reset her European FIA ET record.

Udtian and teammates Liam Jones and Susanne Callin missed Friday’s first qualifying session because all the teams were awaiting parts, which arrived late. Crews were working on the cars to get them ready for the next session.

Jndia Erbacher was next after Udtian with a 3.880 and Anita Makela’s 3.903 meant she had won the European FIA Top Fuel Championship for the fourth time.

Top Methanol Is a class were Dragsters and Funny Cars compete together. Sandro Bellio’s Funny Car qualified in number one spot with a 5.272 (5.492-263.53) (note Funny Car have a 0.22 handicap over dragsters) and was crowned the 2019 European FIA Top Methanol Champion.

Silvo Strauch—driving the ex-Peter Schofer car—went into a huge wheelie off the start line and landed at 150 feet, damaging the front axle. Mats Eriksson did the repair so Strauch could compete on raceday.

Newcomer Sascha Pretzsch did his licence runs at the event in an ex-Greg Hunter TA/FC.

Bellio reached the final when Strauch had tyre shake off the start line. Lagg went up in tyre smoke against Monty Bugeja.

There was a burndown at the start line and then Bugeja stormed down the track 5.303-268.28 to take the winlight against Bellio

Both Alund and Noren had bye runs in round one. Bengt Ljungdahl ran 6.555 to beat Michael Malmgren.

Noren had another bye to the final. Alund led from start to finish against Ljungdahl 6.553 to 6.582.

Jimmy Alund became the first supercharged Pro Mod to run 5.7secs in Europe (5.780), and later in the same qualifying session Jan Ericsson ran 5.789 in his blown Camaro. David Vegter was close with 5.817.

There were some stunning runs in eliminations. John Tebenham ran his first 5secs pass with 5.975-238.70 to beat Wallace.

Micke Gullqvist had a four-point lead coming into this event over Jan Ericsson. Samorukov ended Gullqvist championship hopes with a p/b of 5.982-242.91 to beat Gullqvist’s 6.061.

Dulamon redlit in the final, giving the event win to Ericsson.

Steve Ashdown had an electrical issue and torched the cylinder head on first session, running 5.942. Points leader Kevin Chapman damaged his engine in qualifying after running a 6.459. Both Jason Phelps (6.483) and Kevin Kent (7.379) suffered tyre shake during qualifying.

Chapman got out the gate first in eliminations and then drifted to the wall, but managed to take the winlight against Phelps and become the 2019 European Funny Car Series Champion. Kent just powered past Ashdown when both suffered from tyre shake.

Chapman had damage to his spare motor and was a no-show in the final, leaving Kent a solo pass to the winner’s circle.

This was Paul Harris’ first event since getting his licence, and he ran personal best figures of 6.788-212.80 for number one qualifier. In the last session he had a small fire from the motor after his burnout, which was put out quickly.

Tony Betts had John Wright helping and assisting the team to sort out their new clutch and transmission and ran 8.167. Tim Garlick had handling issues during qualifying and ran 8.771.

Congratulations to the 2019 European FIM Champions:

Congratulations to the 2019 European FIA Champions: