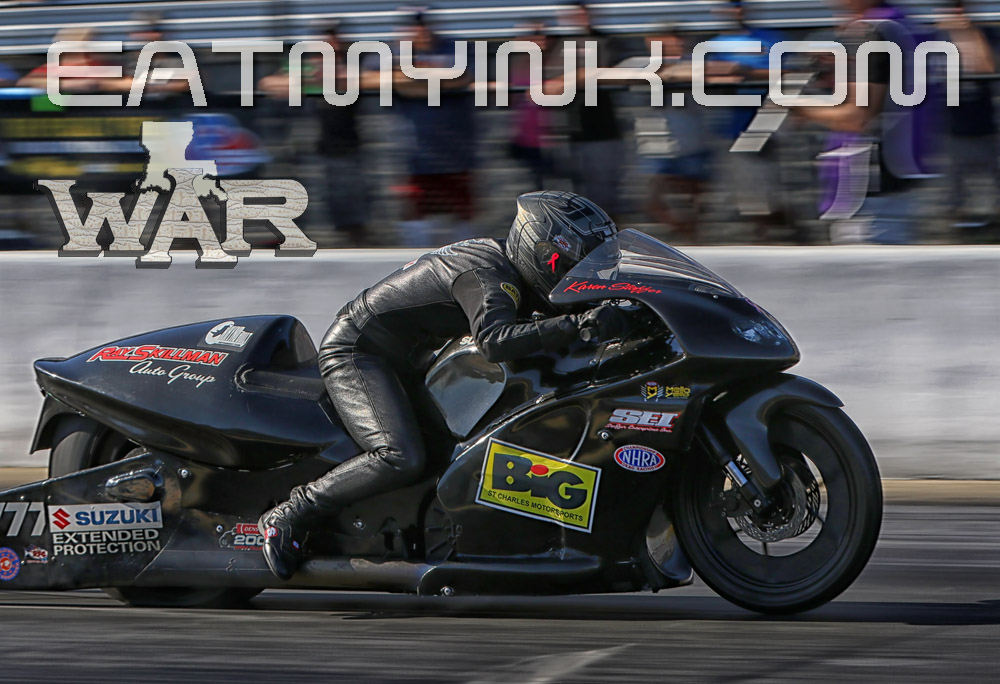 Karen Stoffer is known as the best leaver in NHRA Pro Stock Motorcycle. Her four straight .00 reaction times at Joliet in June marked the first time ever that an NHRA pro had achieved that feat. It’s her superpower.

But sometime after her second round win at the 12th annual NTK NHRA Carolina Nationals at zMAX Dragway over Eddie Krawiec (with Karen logging an .030 light) , someone must have planted some kryptonite in her White Alligator Racing Suzuki. Her .110 against Steve Johnson survived round 3 courtesy of a 6.79—low ET of the round by nearly 3/100ths—and a drop in performance by Johnson. His Suzuki stuttered at about 100 feet, but Steve swears he didn’t double-button.

“My top secret, double layered, power potion lined gloves were misplaced in the trailer after second round,” joked Stoffer. “It sure was a bummer to let the team down, but, where I come from you make mistakes, and that’s OK, as long as you learn and move on. I hope it was not too detrimental for the season, but there is nothing that I can do except look forward.”

Stoffer is in second, 57 points behind Hines with three races to go, and claims to feel no pressure from being within striking distance of a championship. “Pressure—well, as I see it right now, I’m having the best Countdown season in my career, with career bests in ET and MPH, as well as a Suzuki record in MPH. I’m really staying foucesd on that and the task of riding good.

“I’ll continue to be focused on the short term targets of good passes and then good racing. If that parleys into a bigger picture outcome, I’m pretty sure the WAR team and the US Underdahl/Stoffer team will be closely monitoring it.”

“It was a tough day,” said Hines. “We were sitting around during the rain delay yesterday talking about this Pro Stock Motorcycle class and how stacked it is right now. If you look at the top ten in qualifying, any one of those people could be number one at any given time. You just never know when that’s going to happen, so these races right now are hard fought and hard earned.”

Hines raced past Michael Ray in round 1, Scotty Pollacheck in 2 and Hector Arana Jr. in the semi. In addition to Krawiec and Johnson, Stoffer also beat Kelly Clontz.

The Mello Yello Drag Racing Series continues Oct. 17-20 with the fourth of six races in the Mello Yello Countdown to the Championship playoffs, the AAA Texas NHRA FallNationals at Texas Motorplex in Dallas.