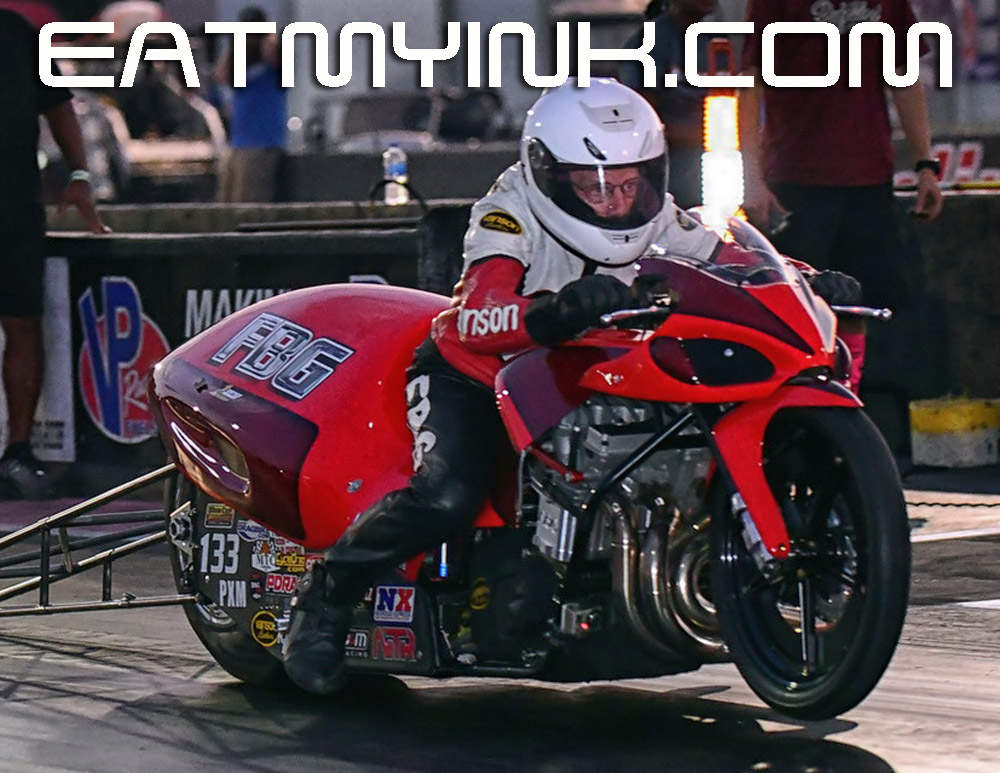 But Gast drew upon his years of experience—and recent success at the Man Cup race at Darlington—to make the right adjustments for the evening sessions. He rode his Fast By Gast Suzuki to a 3.993 at 177.94 to qualify No. 1 for the second time this season.

“It’s been very, very hot today, but the PDRA and the Darlington track crew are doing a wonderful job with this facility to make it hook like it’s doing,” Gast said. “I had a one-flat 60-foot time – that’s about as good as you can do with these bikes – and to do that in those conditions, kudos to the track and the PDRA, but you still gotta get out there and do it. We spun the tire pretty good on the first lick, adjusted it a little bit and went back out there. I knew it was going to run real close to what it ran, so that was no shocker.”

Gast took the No. 1 spot away from three-time world champion Eric McKinney, who recorded a 3.998 at 177.10 aboard his McKinney Motorsports Suzuki just minutes before to end up No. 2. Chris Garner-Jones qualified No. 3, just missing the 3-second zone with a 4.017 at 173.95 on his Jones Racing Suzuki.

Longtime nitrous Pro Modified driver Randy Weatherford rolled into his PDRA Pro Boost debut with confidence after running well at the Shakedown Nationals at Virginia Motorsports Park in September. While that race was held in cooler conditions, Weatherford and his ProCharger-boosted WS Construction Camaro were able to run at the front of the pack in the heat at the Fall Nationals, posting a 3.663 at 204.64 in the third session.

“The car is doing everything we want it to do,” Weatherford said. “It’s running up front. Pro Line has given me an excellent car and it shows on the track. What can I say about [Steve] Petty over there? He knows how to tune them. I’m happy with this thing. I think I’ve found a home.”

The air temperature is expected to drop by around 20 degrees for Saturday eliminations, which sits well with Weatherford. “We’ve tested in some cool weather and we run real good – we ran a .63 at Virginia with it,” Weatherford said. “I feel like we can run better. It’s going to be 20 degrees cooler tomorrow. That should put me back to what we were running at Virginia. We should be deep down into the low .60s. We’ve got the data to run it. Tomorrow should be no surprise for us.”

Championship contender Kris Thorne follows Weatherford in the No. 2 spot with a 3.696 at 218.34 in his twin-turbocharged Carmack Engineering ’16 Corvette. Melanie Salemi rounds out the top three in her roots-blown “Purple Reign” ’68 Firebird with a 3.705 at 201.16.

Switzer Dynamics Pro Nitrous points leader Jim Halsey continued his string of successful runs in the heat Friday when he closed out the final qualifying session with a 3.671 at 206.42 in his Brandon Switzer-tuned, Fulton-powered ’68 Camaro. Halsey felt good about the performance, but he was already looking ahead at the chance to run deeper into the 3.60s in Saturday eliminations.

“It’s been pretty miserable – I can’t wait for tomorrow when it’s nice and cool,” Halsey said. “We’ve been good in the heat. I think that helps us a little bit, but No. 2 is a .68, so it’s not that big of an advantage.”

The top half of the Pro Nitrous qualifying order is loaded with strong runs down the hot Darlington Dragway eighth mile. Jay Cox drove his Buck-powered Butner Construction “Pumpkin” ’69 Camaro to a 3.68 at 206.61 to sit No. 2 going into race day. No. 3 qualifier Chris Rini ran a 3.69 at 204.36 in his Buck-powered ATI Racing ’69 Camaro.

While the racers in the PDRA’s other professional classes have had opportunities to race at standalone races since the PDRA Northern Nationals in Ohio in July, the Extreme Pro Stock class has been on the sidelines since then. Points leader John Montecalvo picked up right where he left off after winning the Ohio race, steering his Sonny’s-powered ’18 Camaro to a 4.077 at 176.13 under the lights.

“I’ve had such anxiety for the past week just thinking about getting here because it’s been so long,” Montecalvo said. “It doesn’t do you any good with that long of a layoff, but I gotta say, once I start this motor up and do my burnout, all the butterflies go away. It just feels great to get in this car and make some good, straight runs. [Crew chief] Tommy Lee, William, Bobby, they’re just doing a phenomenal job here this weekend. I’ve got confidence in my crew. We’re coming down to the wire here and [the championship chase] is heating up. I don’t know who got in or who I’m racing, but I know I’m No. 1 and that feels good.”

With two runner-up finishes this season, Wes Distefano has been having a strong rookie year in Pro Outlaw 632 with his Musi-powered $hameless Racing ’68 Camaro. The Michigan-based driver – and presenting sponsor of the Fall Nationals – added another highlight to his season scorecard with his first No. 1 qualifier award in the class after running a 4.243 at 172.02.

“We’ve been really close throughout the season,” Distefano said, “but it’s good to finally get a No. 1 qualifier here at PDRA. Hopefully our success can continue [Saturday] into eliminations. We’re just going to have to be careful. The weather is going to be coming to us, so we just have to be careful to take out enough, but not too much.”

Chris Holdorf chased Distefano with a 4.284 at 166.11 in his nitrous-assisted C&C Pumping Services ’53 Corvette to qualify No. 2, while Jeremy Huffman represented for the naturally aspirated contingent, using a 4.29 at 164.17 in his ’10 Cobalt to grab the No. 3 spot.

After two of three qualifying sessions, the provisional low qualifiers in the PDRA’s sportsman categories are John Benoit in MagnaFuel Top Sportsman with a 3.832 at 198.33 in his nitrous-assisted ’17 Camaro and Jody Stroud in Lucas Oil Top Dragster with a 3.711 at 201.16 in the supercharged “Zombie” Spitzer dragster.

The provisional low qualifiers in the Jr. Dragster classes are Brooks McMath in Coolshirt Pro Jr. Dragster presented by Knoxtown Products with his 7.906 elapsed time and Logan Westmoreland in Gilbert Motorsports Top Jr. Dragster with a .0013 reaction time.

The PDRA Fall Nationals presented by $hameless Racing will continue Saturday morning with the third and final qualifying session for sportsman racers starting at 10 a.m. Sportsman eliminations will begin at 2 p.m., followed by pre-race ceremonies at 3:55 p.m. and pro eliminations at 4 p.m.