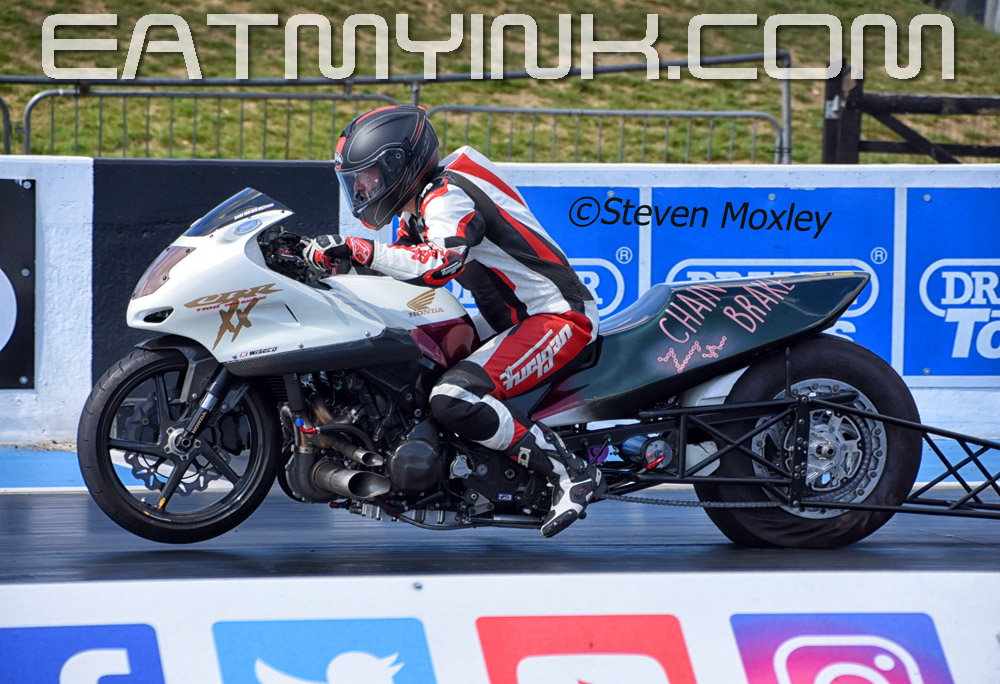 The STP Green Light Nationals at Santa Pod Raceway were a double header for the bike classes. Round 4 was on Saturday with qualifying in the morning and eliminations in the afternoon. Same format for round 5 on Sunday, which will be covered in a separate article here on Eatmyink.

Riders had to face a stiff headwind over the entire weekend.

Dave Peters had built one out of two motors for this event, adjusted the nitrous system and ran 7.877-159.64. Former ACU Comp Bike champion Kevin Osman made his debut with his comp bike, which has been modified to compete in Funny Bike. Crossley did the work and resulted in 8.306-179.26.

The final was the best race of the day, with Belt winning his first of 2019 with a 7.340 to Batcheler’s 7.347 to extend his championship points lead.

Chris Reed entered his Super Street Bike in Comp Bike to do some testing on his air clutch and qualified with a 7.555-188.14 to top the field.

Sykes then redlit against Reed, and Hambridge ran 7.551 to beat Davies’ 8.011 after Louis got out of the groove due to the headwind.

Ross Morrison lost to Ian Chrichlow in round one. Roe won on a holeshot against Alan Morrison in the semi-final with an 8.560 to a losing 8.539. In the final, Chrichlow got out the gate first but Roe took the winlight 8.514 to 8.650.

Alan Morrison Jr. was the number one 9.50 Bike qualifier, but lost to 9.50 champion Richard Sawatzki in round two.

Adam Burns knocked out Sawatzki in the semi-final. Craig Wright eliminated Ian Shipton and Martin Hallett to reach the final.

In the final. Burns nailed a .013 light to Wright’s .115, but Burns had a huge wheelie at 100 feet, which allowed Wright to get the winlight.

Reigning champion Phil Pratt beat Ashby in round 2 and then beat Jordan Kenway to reach the final.

On the other side of the ladder, Paul Adams beat Jasmine Cordelle, Andy Ball, and Robbie Dobbie to face Pratt in the final. Pratt won the event and now leads the championship.

Ian Turburville debuted his old bike, which he brought back earlier in the year. He last competed on the bike in 1999 and had his crew-chief Martin Blackwell helping him again.

Paul Harris was doing licence runs at the event in the Chi-Town Hustler Funny Car and ran 6.93 at 182 mph to complete his licence runs on Saturday.