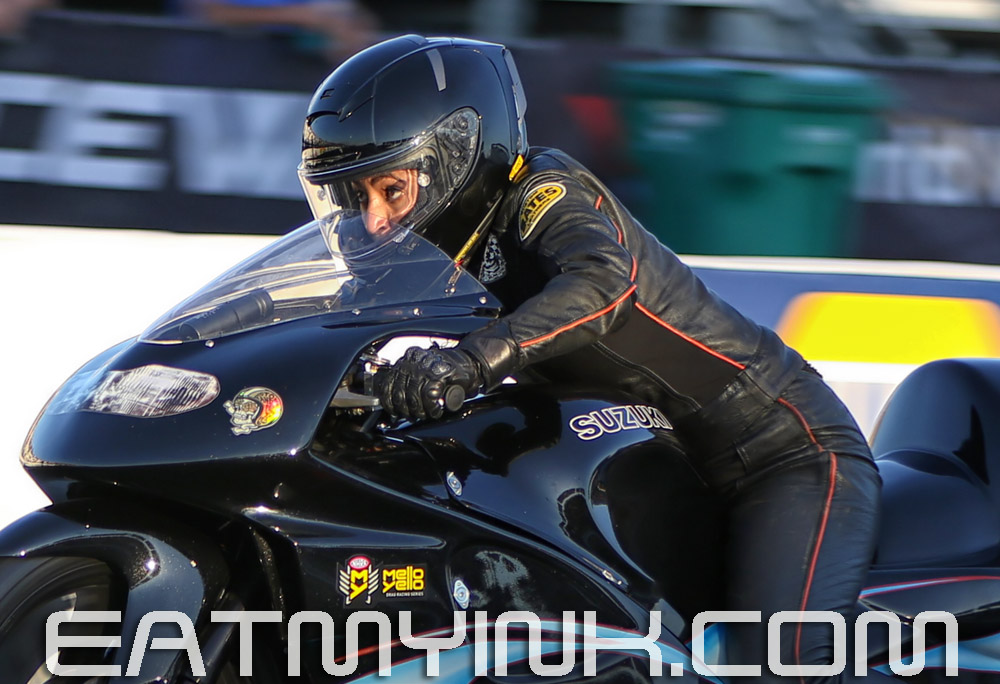 Editor’s note: Unlike most racers, who learn their trade through the sportsman ranks, Jianna Salinas is learning in front of the crowds and cameras of the NHRA Mello Yello series. Craig “Pops” Hopkins sat down with Jianna at Dallas to give Eatmyink readers her perspective on the journey so far.

While sitting in the pits talking to Pro Stock Motorcycle (PSM) owner/tuner/coach Greg Underdahl, I asked if he thought his newest rider would mind sitting down for a few questions about how she came to be a PSM rider. “Guess you will just have to ask her” he said. At the time, Jianna Salinas was watching her sister make her final qualifying pass of the day in her A/Fuel dragster. When she returned to the pits she said “Sure,” that she was willing to let us all  how she got to PSM.

First I asked her what brought her to PSM, she said that most people thought she would go into a dragster like most of the family, but that she wanted more of a challenge and that she sees PSM as the most challenging class out here. She also said that she sees the PSM competitors as some of the most competitive in NHRA.

I asked when she first thought about being a PSM rider, she replied “I’ll be very honest. I really wasn’t interested in bikes until maybe 2-3 years ago, just because we have never grown up around bikes and it was something my parents never wanted my sisters and I to ever be involved with. And then I got my motorcycle license when I was 18 or 19 years old. That was when my interest in bikes really took off. That lead to my getting interested in Pro Stock Motorcycle, and watching them, and started me thinking they are so cool and the riders are so cool.” She said this with a big kid grin on her face that I’m sure many of us can identify with.

We then talked about the fact that she played volleyball for many years but that due to her small stature she had gotten as far as she could in that sport. At that point she discovered that she was the perfect size to be a PSM pilot and, unlike Jerry Savioe, she wouldn’t have to starve to be that size.

So the next question had to be so what did your parents think? “They thought I was completely crazy but they have always been extremely supportive. And they were with me the whole time. My dad (Scrappers Racing Top Fuel owner/driver Mike Salinas) was actually the one that put everything into motion I just mentioned it and he said ‘OK lets go look at them.'”

At that point Jianna said that Mike started making introductions and getting started on making deals. This led to teaming up with Greg Underdahl, and Gary and Karen Stoffer, who put together a whole program to get Jianna up to speed on how to pilot a PSM bike.

They started her out on a training bike and giving her more power as she learned to handle it. She said that she had offers from a couple of other teams who just wanted to put her on a bike, but she didn’t feel comfortable as she knew she didn’t have the necessary experience, and so she chose wisely, I may add.

After her first pass, Jianna decided she was hooked. In her words “Oh my gosh, I need more!”

You can find one of Jianna’s first test passes on a Suzuki with a less-than PSM motor/tune-up in this Norwalk testing video from 2018:

We talked about her decision to go with Greg, Gary and Karen and the confidence they have helped her gain in her abilities. When asked where she was in comparison to the rest of the field in her abilities, she admitted that it is a humbling experience and that she is still a ways behind most of the field. But she also stated that she is up to the challenge and that the challenge is one of the most important parts to her. Jianna feels that by racing the best there is in this type of motorcycle racing that it helps her to achieve her goal of becoming one of those “best”.

Jianna’s struggles to keep the bike straight and level at launch are shared by a few in the PSM field. Here’s one of her first Gainesville launches:

Then we approached what it was like to get back on the bike after the crash she had in Chicago this year. I asked if she had any problems getting back on the bike and she admitted it was more of a mental issue than a physical one. She still thinks about certain issues when she suits up each time, but admits that as time goes by it’s getting easier and she knows that it is all a learning experience.

Here’s the video of Jianna’s wild crash at Joliet:

So I had to ask, what did your parents have to say about it all. “It was very difficult for them, but they knew I was ok physically. And they were very patient with me and didn’t push me to get back on or not. But my mom did say that she wouldn’t allow me to go back racing until I made solid straight passes, which I did. We did some testing and it felt good with solid straight passes.” She said that her parents have been extremely supportive through it all and that she appreciates how hard it must be on them.

Jianna plans on being around for awhile. She wants to become one of the top riders in PSM and I believe she has the drive to do it. And with dad’s help, she has what many do not and that is the financial support to go with it. Her current plans are to finish school with a degree in Child Development while working part time in the family business.

She will graduate from school with a diploma in December, but the graduation she’s really looking forward to is the one with a Wally in the NHRA winners circle.

photos and video (except the crash) by Tim Hailey 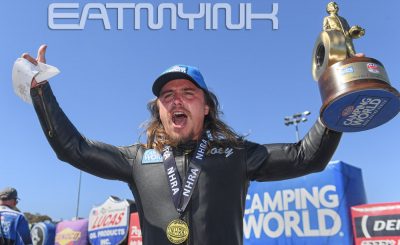 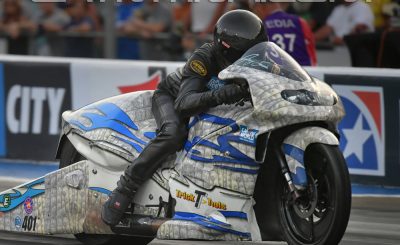 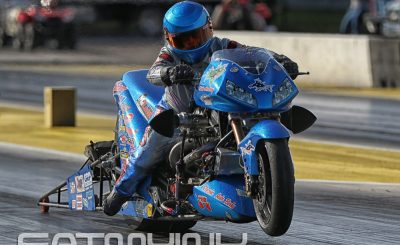