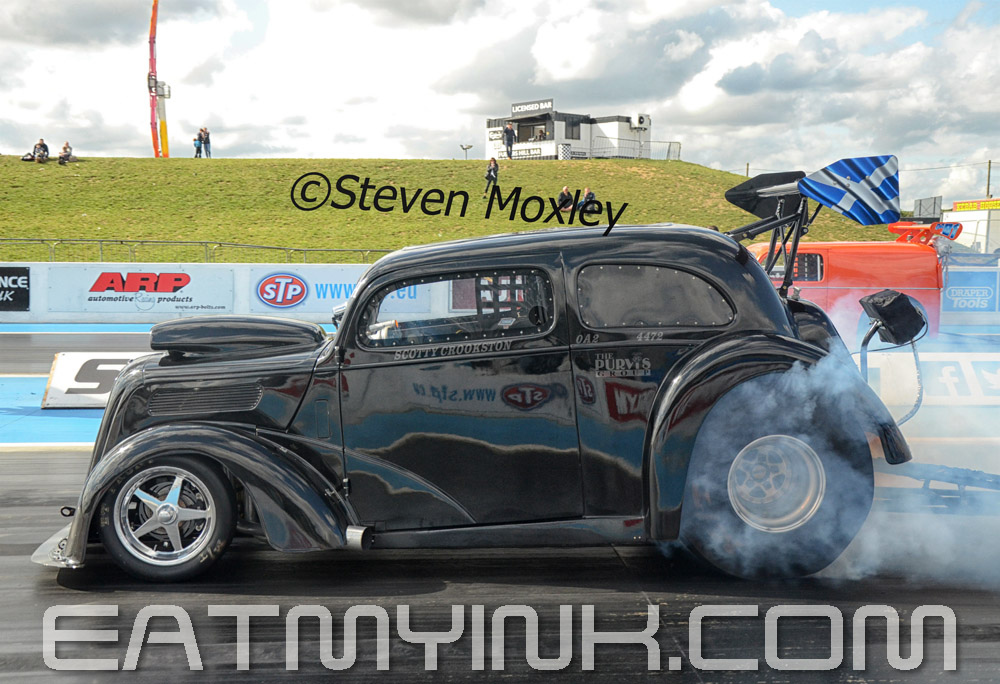 Rain at Santa Pod Raceway on Sunday delayed the start of qualifying for the STP Green Light Nationals, and it meant a one shot qualifier for the bikes in Round 5 of the ACU Championships.

Funny Bike championship points leader Kars Van Den Belt suffered low oil pressure the day before, and when he warmed up the motor on Sunday, he heard a noise and decided not to compete.

Only Dave Batcheler got a qualifying time of 8.339. Both Phil Crossley and Kevin Osman broke in the burnout box. Dave Peters launched but stopped at the 100 foot mark.

A decision was made to have a second qualifier, but only Osman and Batcheler put a run in. So straight into the final. Osman had his clutch sorted and won his first ACU Funny Bike event with an 8.240 to Batcheler’s losing 10.743.

There was also high attrition rate of breakages in Comp Bike, with four competitors failing to make the call in round one of eliminations. Leamon broke the beam and was into the final. Davies beat his nearest challenger for the championship, Sandtke, 7.689 to 10.166.

Alan Morrison beat Ross Morrison and had a bye to the final. Chrichlow beat Lester and Roe redlit against Andy Haley. Chrichlow had a better light in the semi and took the win light 8.758 to Haley’s 8.882.

Chrichlow had another good light in the final, but Morrison powered around to take the win 8.529 to 8.762.

Alan Morrison Jr. ran 9.502 to top the 9.50 Bike field. He then eliminated Stacey Reed and Brett Cordelle to reach the final.

On the other side of the ladder, Richard Sawatzki beat Adam Burns and Craig Wright.

In the final, Morrison put a holeshot over Sawatzki, who then powered around to win the event 9.528 to a losing 9.627 from Morrison.

Phil Pratt was the number one qualifier ahead of Dave Grundy and Gary Hester. Pratt beat Peter Harrison and Hester to reach the final.

On the other side of the ladder, Robbie Dobbie beat Jake Mechaell, Duncan Barron and Jordan Kenway.

Pratt won his second event of the weekend and now leads the championship.

Ian Turburville ran his quickest time of the weekend to be number one qualifier, but he had a problem with his motor on his bye run and didn’t make an eliminations pass.

Michael Gooding won on a holeshot against Mike Nelthorpe in the semi-final and had a solo run in the final to win the event.

Millar beat Taylor in the first semi 7.565 to 8.288. Barlow redlit against Crookston in the other semi.