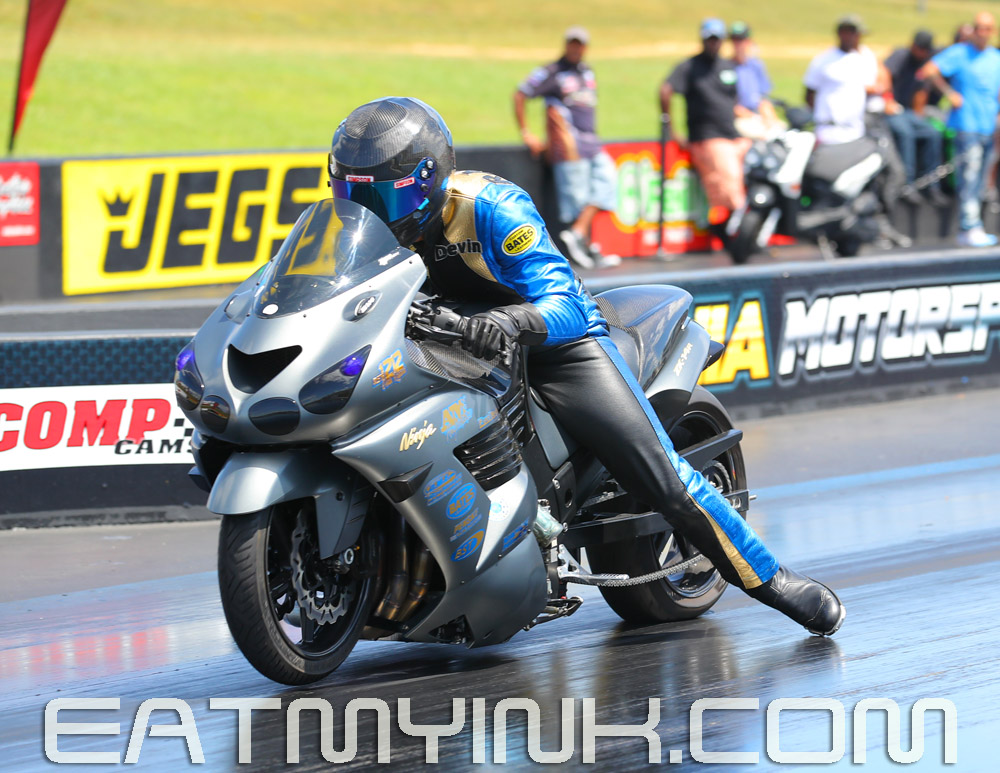 Devin Ragland, known as “Devin Doe” on Facebook and seen on his Real Street bike above, is never shy with his words or predictions. After getting his first DME Real Street win last weekend at the Xtreme Dragbike Association (XDA)’s Inaugural Bike Bash at Virginia Motorsports Park, Ragland already sounds like he’s talking “Dynasty.”

“Anibal Merced has my bike on kill, so as long as I do my job it’ll be hard to beat!” said Ragland. “It was a win-win for me anyways, with both of my bikes being in the finals.”

“Then some people in Real Street told me I have to pay riders to ride my bikes, so I came to the class and shut them the hell up quick!” said Ragland.

Jeremy took the tree with an .085 to Devin’s .102 in the final, then wheelied and let Ragland drive around. The little 1000 caught Ragland’s big Kawasaki ZX14 but couldn’t get back around. The trash-talking Ragland beat the soft-spoken Teasley 7.590 to 7.614—the quickest-ever side-by-side, all-AM Performance, all-Ragland-owned, two-make, small-vs-big-bore, Real Street race. What more could you want?

Well, Ragland wants more. “Me and Jeremy both plan on going mid-to-deep .50s at the last race in Maryland.”

Lexington, Kentucky resident Ragland is a Wildcat fan—try not to hold that against him—and owns a lawn care and landscaping business. He started racing at 14 on an old school GSXR750.

Fast forward a few years and Ragland gets introduced to the nitrous voo-doo of Merced—a championship rider himself. “I was at a race in Orlando called Drag Mania in 2012 and seen a couple of his bikes run and was really impressed,” said Devin. “So Victor Gotay hooked me up with Anibal and got my first bike built by him in 2013. Been with him ever since. Anibal is one of the best mechanics in the game.”

Ragland’s ’14 is similar to Merced’s own championship-winning ’14. “It’s 2 mm plus over on the bore and 4 plus on the crankshaft, same as me, “ said Anibal. “It has a little different NOS system than mine—the man like to spray! He gamble with the nitrous and he spray more than me on my bike! But I’m very impressed with his combination, how fast it’s been without blowing up!

“He got good skills riding, too! I remember wen we went to test for the first times and things wasn’t going too well, he told me ‘Is not like I can’t ride!’ And I told him ‘Is not that you can’t ride, this class isn’t as easy as it looks.’”

That goes for building and tuning as well as riding, and Merced has those bases covered with Kawasaki ZX14s and Suzuki GSXRs. Ragland has one of each and they’re the only Real Street bikes ever in the .50s.

“I just wanted both of my bikes to go to the finals. That’s a win-win for me. But both of them going 7.50s is UNREAL.”

As is the name Doe—what up with dat? “I didn’t have Facebook when I started grudge racing and people would talk shit online and I couldn’t defend myself, so I just made a Facebook account for that,” laughed Ragland. “I don’t know, something like John Doe I guess.”

Jeremy ran the first Real Street competition .50 at the last event with a 7.592 but was unable to back it up as an official record. Real Street racer Ralphie Navarro—who’s “head over heels” in love with the class—put up $500 before this event as an incentive to the first racer to run a .50 at the Bike Bash event. Jeremy ran a 7.584 in Q2 and backed it up on Sunday to make it official.

Still recovering from an accident earlier this season, Ralphie jumped on his Harley and rode down from New Jersey to deliver Teasley’s cash in person.

story by Tim Hailey with a lil’ info from XDA, photos by Kenneth Charlton and Hailey