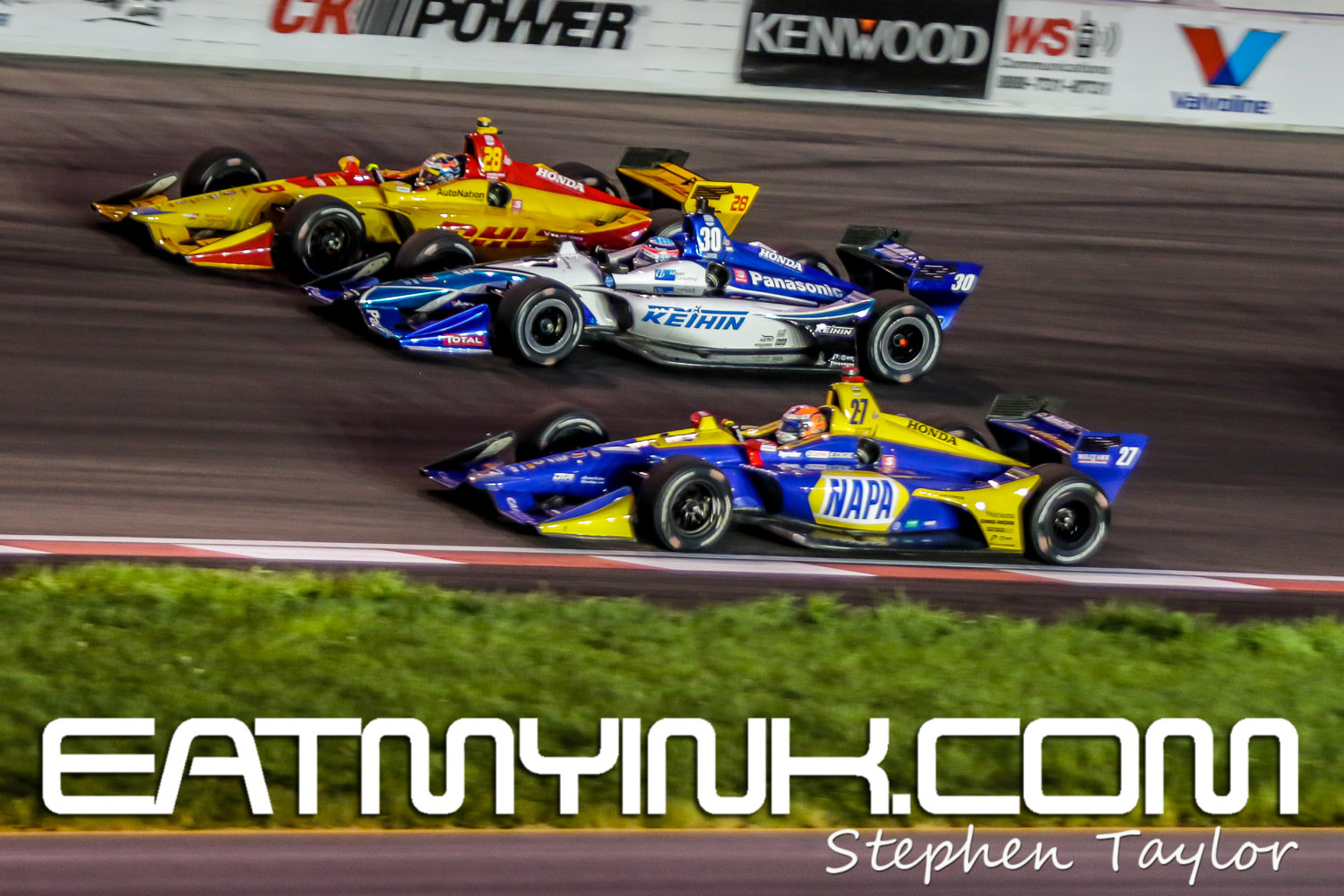 Sweet Mother of Redemption! After being lambasted from all sides (sometimes with vitriolic hate, as happens today in our world of angry, armchair know-it-alls) and lustily defended by his Rahal/Letterman/Lanigan team, Takuma Sato rebounded with a storybook win at World Wide Technology Raceway at Gateway.

The win came six days after being the main target for his role in the first-lap, multi-car pile-up at Pocono Raceway that left his car upside down on the tarmac and Ryan Hunter-Reay’s car. Here’s amazing video from Sato’s onboard:

Sato qualified fifth for Saturday’s Bommarito Automotive Group 500 at the St. Louis area, egg-shaped oval, and as the race got underway it looked dangerously close to a lap 1/deja vu allover again—this time under beautiful sunset skies. Unlike last week when Alex Rossi was the meat in a Sato, Hunter-Reay sandwich, this time it was Sato lacking momentum at the start. He was passed on both sides going into turn one and found himself in very loose territory, making contact with Hunter-Reay—again! Even Rossi was back in the mix, following James Hinchcliffe past Sato inside through turn 1. All drivers saved their mounts this time, but Sato eventually dropped all the way to last place.

Here are highlights of the Gateway race, including the first lap:

The first lap wildness continued into turn 3, where Marcus Ericsson spun into the grass. He also continued unscathed. “I got chopped in turn 3 and I sort of half-spun the car and managed to stay out of the way of other cars and the wall, so that wasn’t the best start to the race,” said Ericsson, who eventually finished 16th. “There was no damage, so we could come in to clean up the grass on the car and get after it again.”

And getting after it is what drivers were doing all over the track all night long. Every restart looked like last-transfer-spot madness at Salem Speedway, with even allegedly “washed-up” guys like Tony Kanaan gassing it around packs of cars at a time.

And Kanaan was right there at the end, finishing with Sato and Ed Carpenter on a podium that had Vegas praying that no one had bet on these three guys.

The last laps were as wild as the first. Championship leader Josef Newgarden and rookie Santino Ferrucci were engaged in a back-and-forth grudge match, with Newgarden often making the wise choice to protect his points as Ferrucci repeatedly raced into the marbles.

But in turns 3 and 4 of the final lap, Ferrucci was waggling all over higher groove and Newgarden seized a moment—until he didn’t. Deep on the inside in turn 4, Newgarden suddenly feared the aggressive Connecticut rookie was gonna chop him off, and Josef jumped on the binders. So much so that he looped his car and then coasted helplessly down the straight as he lost two places and finished seventh. Ferrucci finished fifth.

“I was happy I wasn’t in the (wall), to be honest with you,” said Newgarden, who also had some lecturing words for Ferrucci. “The engine was still going, I wasn’t in the wall. (I thought), thank goodness I’m kind of straight, I can’t believe we’re still going here.”

As Newgarden was spinning, Carpenter was reaching the end of a hard charge that saw him pass Kanaan and nearly clip Sato at the line. The 0.0399 of a second gap was the closest finish in this track’s 10-race IndyCar history.

“It’s a great story,” Sato said about his resurrection.

“It could have been a different winner if we had a little longer straightaway or another lap,” Carpenter said.

“This win is so special,” said Sato. “Beside Indy 500, obviously nothing like that. This is just so emotional. Gave me unbelievable boost.”

It’s Sato’s second win of the season, the fifth of his career, and first on a short oval.

Despite his second late-race spin of the year, Newgarden will still head to Portland International Raceway for next weekend’s penultimate race with a lead that has grown each of the past two weeks. He leads Penske teammate Simon Pagenaud by 38 points, Andretti Autosport’s Rossi by 46 points, and Scott Dixon by 70 points after they finished fifth, 13th and 20th, respectively. Rossi got caught with an unfortunate pit strategy and Dixon’s car caught some shrapnel in a radiator early.

Carpenter and Kanaan scored their first top-three finishes of the season. Carpenter last finished second in last year’s Indianapolis 500, while Kanaan’s most-recent podium was at Texas Motor Speedway in 2017.

Ferrucci, who led a race-high 97 of 248 laps, scored his second consecutive fourth-place finish and the third of his rookie season, and it allowed him to move two points ahead of Chip Ganassi Racing’s Felix Rosenqvist (No. 10 Monster Energy Honda) for the lead in the Rookie-of-the-Year battle.

Conor Daly (No. 59 Gallagher Carlin Chevrolet) gave his team its best finish of the season in sixth place.

In addition to having a venue for great racing, Gateway and the Bommarito Automotive Group also do a fantastic job of promoting and running this event every year. Saturday night’s balmy temps sure didn’t hurt, but be sure and tell John Bisci and staff when you see them at the NHRA and NHDRO events “Kudos” for a great job.

Results Saturday of the Bommarito Automotive Group 500 NTT IndyCar Series event on the 1.25-mile World Wide Technology Raceway, with order of finish, starting position in parentheses, driver, engine, laps completed and reason out (if any):

story by Tim Hailey and IndyCar