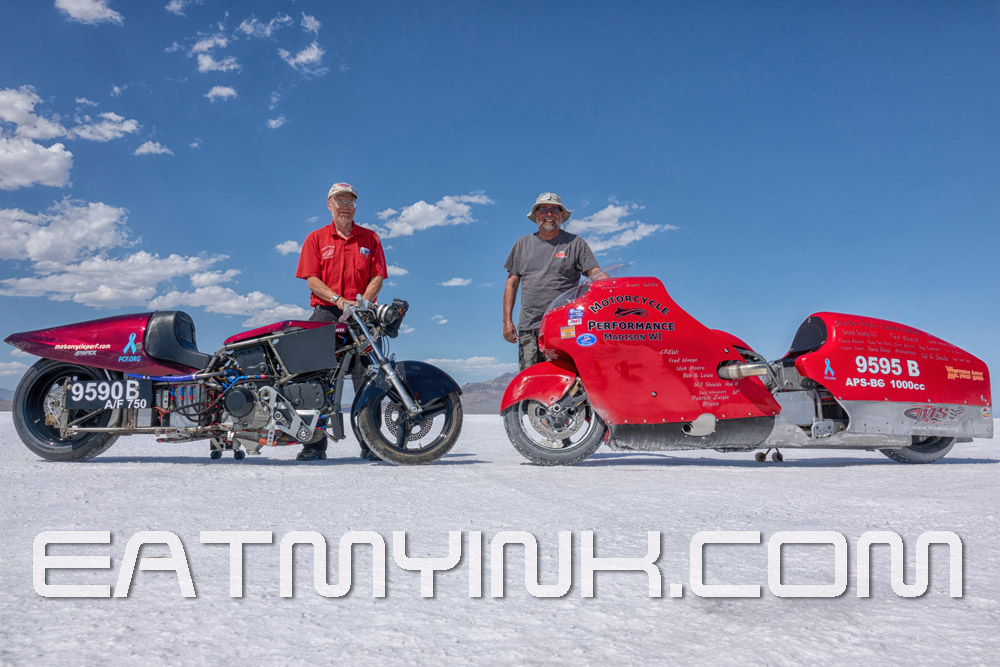 The Bonneville Salt flats are unlike any other place on earth. If you are from the Midwest, like me, you have probably experienced snow, and if you go to the Salt flats you will expect it to be like snow. But what you have is more like a hard-packed beach.

This year I attended the 71st annual speed week with a team from my hometown of Madison Wisconsin. The team consisted of William Whisenant and Sam Wills (both shown in photo above with Sam and a turbo Ducati 999 on the right and William with a nitro 749 on the left), Fred Weege, Patrick Zeigle, Bruno, Nole Hackbarth, Patty Whisenant, and myself (Adam Weege).

The week started at 5:30 am Friday to begin the nearly 1500 mile drive to Wendover Utah. We met up with Sam and Bruno somewhere in Nebraska to hand off our trailer so they could haul the trailer over the mountains.

We arrived on the salt around nine-thirty on Saturday morning and were greeted with standing water on the salt from a rainstorm on Thursday. We found a dry-ish spot, unloaded the trailer, and headed to the driver’s meeting. After the meeting the bikes were looked over in tech inspection. Racing was scheduled to begin on Sunday, but due to salt conditions, the courses weren’t ready until Tuesday morning. So on Tuesday morning we attended rookie orientation, and then went to the rookie course to begin doing laps.

Being the only rookie, Fred was up first riding the turbo 999 Ducati. Not having ever been on the bike he had trouble shifting and was only able to reach 93.747 in first gear—still enough for his rookie “E” license! The bike was picked up and we headed towards the timing tower for the speed slip.

Patrick was up next and, having already achieved his “D” license at a previous Speedweek event, he took his first ride on the turbo Ducati and successfully licensed up to a “C” license.

The timing trap is usually a 1⁄4 mile long but, due to poor salt conditions, the timing trap was only 132’ on the rookie course. The turn around on the rookie course was amazingly about an hour and a half, Fred went again at a speed 130.183, which qualified him for his “D” license. Fred suited up one last time for the day going after his “C” license (over 150 mph), but he crossed the traps at a speed of 149.881 and just missed it.

We went back to the pits, packed up the trailer, and dropped it at the end of the line for the long course that day. We returned the next morning and waited in line all day, so the team decided to head back to the rookie course for Fred and Patrick to license up again. Some of the team stayed back to hold the position in line.

Fred suited up and ran a speed of 169.430 and got his “C” license. Patrick suited up and tried for his B license, but the course was too mushy and he deemed it was unsafe. We got back to the long course line and we were at the front when the day ended.

The trailer stayed there overnight, the record return runs were first in the morning, and we were about third in line after those. Sam Wills put on the leathers and hopped on the turbo Ducati. The course wasn’t favorable and he was not familiar with the bike and the course did not help.

We got back in line and Sam ran for a second time on the long course. Unfortunately, the course was absolute crap at the end of the day and Sam could not unleash the beast that is the Ducati 999 turbo. So we headed over to the short course to try and get Sam Wills his “B” license at 199 mph but the course was bad and the bike could not perform.

The last day that the team competed was Thursday. Sam completed two runs on the long course, but the track deteriorated too quickly and the bike was not within its capabilities because of the salt. We left the salt on Thursday night after helping Andy Pickett with his 50cc motorcycle in impound before the night ended.

Overall the week was fun and it has got me wanting to race. Hopefully we will be back soon. We are in search of a record and we will get it, but the salt has to allow it.

Everybody there will help anybody, whether it is an air hose, air shifter, or rubber o-rings. Everyone is willing to talk. Every vehicle there is unique in its way, whether its a coupe that burns sixty gallons of pre-mix nitro—thirty-three gallons per run—or a Ford pinto wagon.

Bonneville is a very surreal and humbling place. If you have a chance, by any means to go there and experience it—you will not be disappointed, I promise.