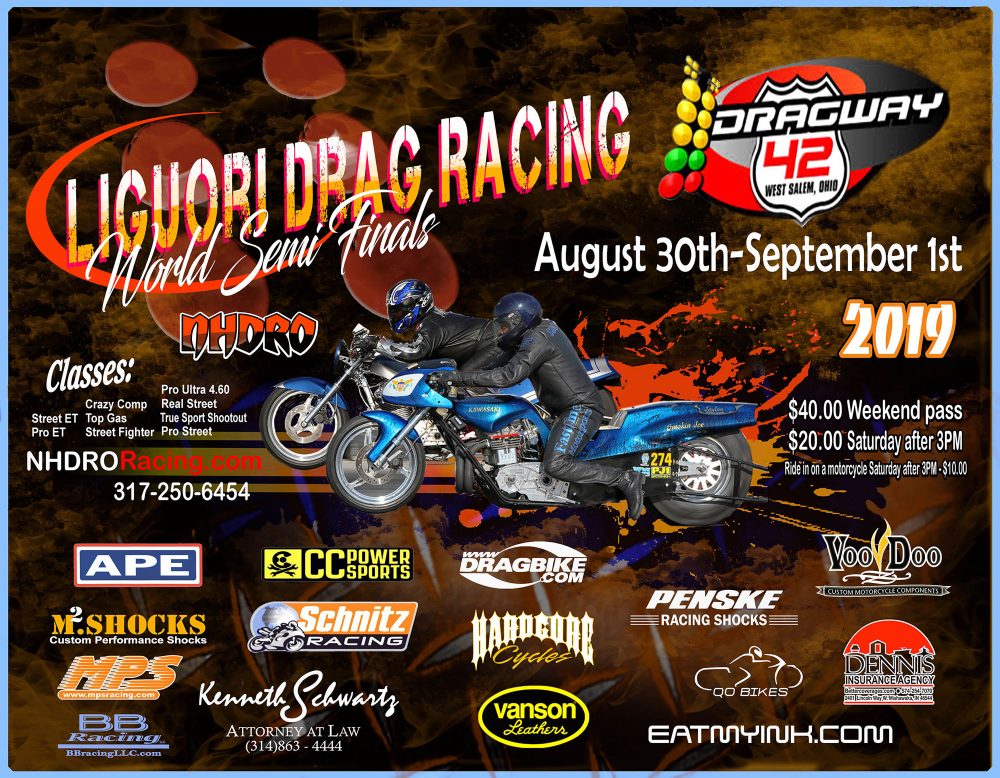 NHDRO brings its racing family back together in the reunion picnic atmosphere at the park-like setting of West Salem, Ohio’s Dragway 42. The Midwest’s largest motorcycle drag racing series will hit the track with the Liguori Drag Racing World Semifinals on August 30-September 1.

With two straight Pro Ultra 4.60 wins, “Smokin’ Joe” Rodney now has a 34 point lead over Broderick Jackson. Jeffersonville Joey Burgess is 36 points behind Jackson, and has only 4 points on Louisville’ Keith Nichols. Bob Foster is 10 back of Nichols, then it’s another 40 to Dan McCarten.

And just because he’s a long way off the points lead, don’t count out Cleveland racer Jimmy Muntain. Jimmy’s determined to turn his season around and Dragway 42 is the place for him to do it.

M2.Shocks Crazy Comp 8.89 index is led by Kentuckian John “Spooky” Markham, who has 24 points on no-bar racer David Beshara. Lee is only 10 points in back of Beshara, while Joe Klemme is a full 57 points behind Dustin.

Ron Arnold leads Penske Racing Shocks Street Fighter by a full 100 points over Kevin Adams, who has a slim 7 on Dalton Markham. Rylan Rowe is 33 behind Dalton and a scant 3 ahead of Jeremy England. Kevin Dennis is a further 7 back.

Spooky is a distant second in the MPS Pro ET battle, a full 140 points behind his son Dalton. Klemme is only 10 points behind Spooky, with another 40 points back to Chad Isley. Beshara is down a further 20, and is 10 ahead of Lee.

Lee is leading Kevin Dennis Insurance Street ET with a slim 10 points over Dalton, who has a whopping 130 on Michael Schmalle.

And at nighttime it’s VooDoo Grudge time, with the Midwest’s baddest grudge bikes and rider pairing up for northern Ohio’s ballingest bettors to trade bills along the wall, race after race. Vince Hileman on “Family Man,” Teasley on Chris “CJ” Johnson’s “Tommy Gunn,” Joey Jobbe on “Anti-Social,” the MSP bikes “Clean Getaway” and “Big Greezy,” Louisville’s Brandon Holland on “Killer Bee,” and more are expected to pair up and throw down.

NHDRO’s Brian and Niki Welch and David Liguori of Liguori Drag Racing look forward to welcoming everyone to Dragway 42 this weekend!