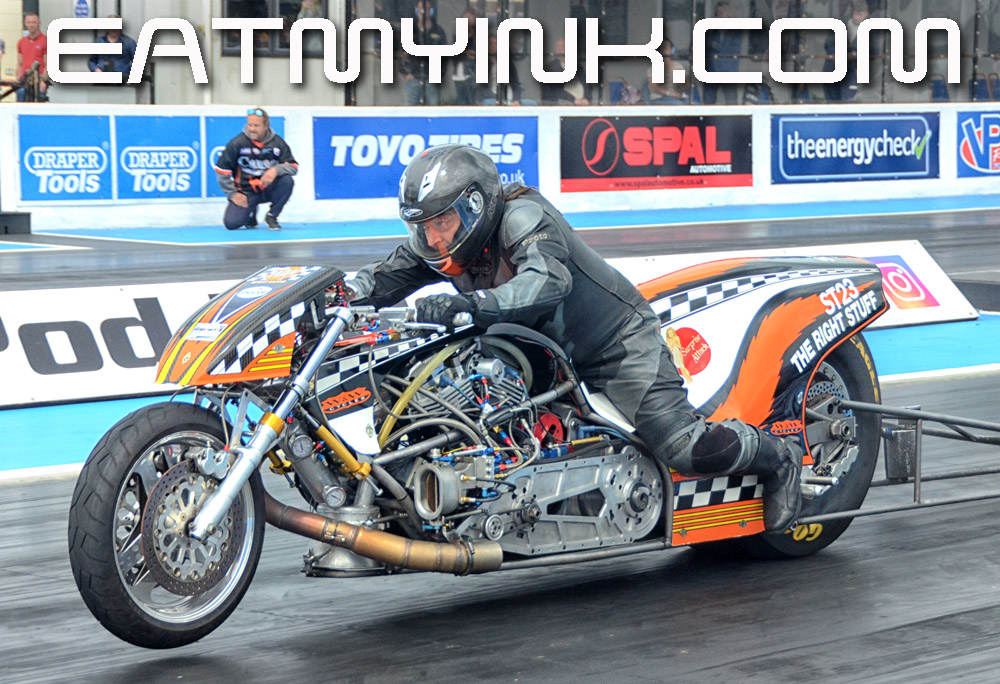 The 2019 European FIM Championships got underway at Santa Pod Raceway with the Main Event under overcast skies and showers on and off on Sunday and Monday of the Whitsun bank holiday weekend.  Some new records were set at the meeting.

Both second and third qualifiers Steve Woollatt 6.187 and Rene Van Den Berg 6.287 damaged their engines and were out of the show.

Eric Richard came in as first alternate for Woollatt and beat Leeks, who drifted to the wall. Glenn Borg had a bye run to the semis. Gustafsson beat Stuart Crane and Papafilippou took the winlight over a troubled Pettersson.

Gustafsson’s 5.912 beat Papafilippou’s best of the weekend 6.175 in the first semifinal, and Borg reached his first final of a FIM event when he knocked out Richard 6.885 to 7.039.

Reigning FIM SuperTwin Champion Marcus Christiansen led the Main Event field with a 6.386 at 215.10. Former champion Samu Kemppainen was next at 6.552-214.90. Neil Midgley ran a personal best speed of 194.63 at the finishline.

Martijn De Haas debut his new Don “DJ” Johnson frame and had handling issues during the first three qualifying sessions. But in the final session he got in the show with a 7.316.

Marc Van Den Boer has fitted fuel injection to his motor and ran a p/b of 7.437-162.52. Christian Jager would have been in the show (7.247), due to a blue line violation by one of his crewman removing the pin from the parachute.

Boer ran another personal best of 7.286-175.07 against Christiansen’s winning 6.531. Laseur and Kemppainen went into the semis and Midgley just beat Davies.

Laseur was ahead of Christiansen at mid-track but then drifted very close to the centreline and had to ease off, as Christiansen took the winlight 6.652 to Laseur’s 7.066. Kemppainen ran his best of the weekend with a 6.526 to beat Midgley.

The final saw Kemppainen break just off the start line and Christiansen soloed to the winners circle.

Multi-time champion Fredrik Fredlund was the number one Pro Stock Bike qualifier with a 7.116, but at the expense of a damaged transmission, which put him out of competition.

Paget broke off the start line, leaving Bishop a bye to the final. Simon broke against Maurice, and Koskinen beat Fuez.

Bishop broke the beam in the semi and Koskinen ran a p/b 7.125 to beat Maurice in the other semifinal.

Koskinen won his first FIM event, when Bishop was a no-show in the final.

Mogens Lund led the first qualifying session with a personal best of 6.972 and then ran 6.964. Garry Bowe was the only other rider to run a six-second pass (6.995).

There were a couple of shocks in round one of eliminations with Erich Gruber beating Lund (who had an engine problem) and Rudolfo Maduro running a best of the weekend 7.153 to beat Zorzi 7.714.

Round two and Gruber took another scalp when Stephen Mead crossed the centreline. Garry Bowe pulled a rare redlight against Alex Hope. Then both Bohlin and Maduro’s tyres spun from the start line, with Bohlin taking the winlight in a close finish. Venables beat teammate Graham Balchin.

Next up was the semi-finals and Gruber’s next victim was Hope, who’s motor blew at mid-track. Venables ran 6.889 while Bohlin had problems at 150 feet in the other lane.

Gruber was in his first FIM final. Venables set another ET record of 6.854 for the win to Gruber’s wheelie run of 7.847.

Anita Makela continued were she left off last year by setting a new European Top Fuel Car ET record of 3.842. Makela ran 3.870 to top the field in qualifying, just ahead of Liam Jones’ 3.887.

Stig Neergaard 3.917 and Jndia Erbacher 3.945 were the other three-second runners.

Erbacher’s engine blew at mid-track against Makela in the first semi-final and Jones redlit against Maja Udtian in the other semi.

Udtian had a staging issue in the final and redlit, leaving Makela to storm down the track and set a new ET record 3.842 and win the event.

A small field of three Top Methanol cars entered the event, and Sandro Bellio was the number one qualifier with a 5.309 (handicap index Funny Car against Dragster). Jonny Lagg ran a personal best of 5.310 and Manty Bugeja ran 5.360.

Michael Malmgren just edged Jimmy Alund for the Pro Stock Car number one qualifying spot with 6.573 to Alund’s 6.575. Bengt Ljungdahl was next with a 6.611.

Malmgren put a holeshot over Alund in the final, but had tyre shake at mid-track and eased off. Alund took the winlight with a 6.596.

Nick Davies ran a personal best of 6.131-241.11, and John Tebenham completed his licence runs and qualified in fifteenth spot with a 6.249.

Mats Eriksson—with a new paint scheme on the ‘56 Ford Crown Victoria—redlit in the final against Micke Gullqvist.

Round two of the four round European Funny Car Series saw Steve Ashdown run a personal best of 4.475-256.45.

Kevin Kent broke his rear axle, which in turn damaged the chassis.  Santa Pod Raceway loaned their show car and the crew worked long hours to get that car out for the next day. Kent ran 6.081, but the rear axle broke on that car (!?) and he was out of the show.

Ashdown won the event against Kevin Chapman, who was heading for the wall and eased off the throttle.

Top Doorslammer is a Scandinavia car class, which competes over the 1/8thmile distance. A group of racers had an invite to this event to run over the full ¼ mile.

Strand beat the favorite Wulcan in the final with a 5.942 to Wulcan’s 6.677. Wulcan drifted to the wall at mid-track.