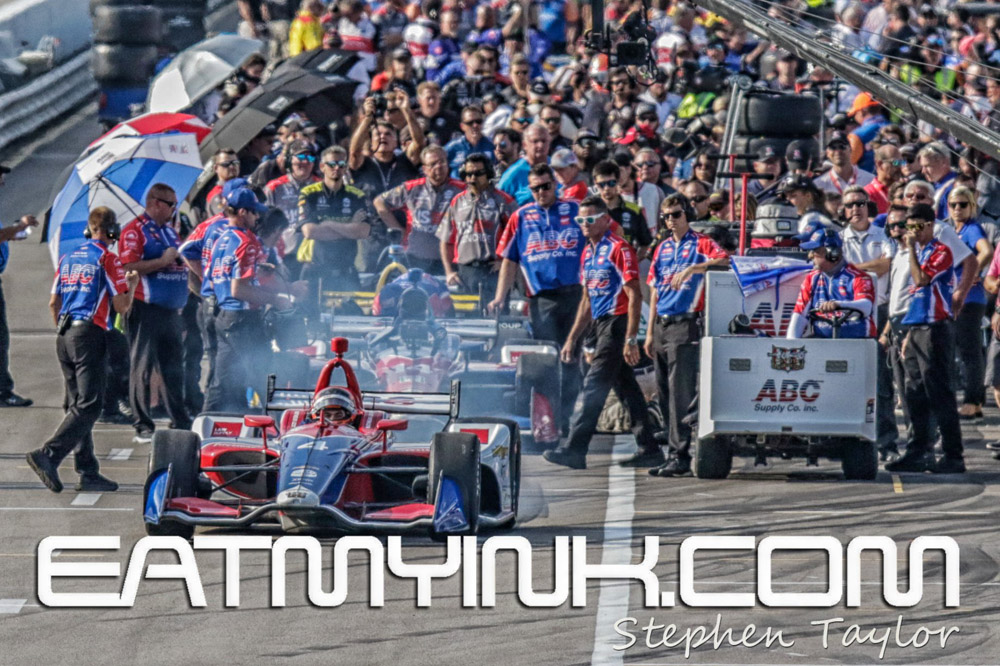 After a week of swirling controversy, finger-pointing, and hand-wringing following last weekend’s first lap pile-up at Pocono, drivers away-from-the-fray took the upper hand in qualifying for IndyCar’s Bommarito Automotive Group 500 at World Wide Technology Raceway at Gateway. NHDRO will run their World Finals on the Gateway dragstrip in October.

Team Penske’s Josef Newgarden put Chevrolet on the pole for Saturday night’s race in the No. 2 PPG Dallara as Chevy seeks to sweep every oval race this season.

Newgarden won the Gateway race in 2017 on his way to his first season title, and hopes to repeat with another strong performance Saturday night. And although IndyCar doesn’t officially award qualifying points until the conclusion of the event, Newgarden effectively has a 36-point lead over Andretti Autosport’s Alexander Rossi in pursuit of his second series championship. Rossi will start 11th in the No. 27 NAPA Honda.

Newgarden posted a two-lap run around the 1.25-mile, egg-shaped Gateway oval at 48.2554 seconds, an average of 186.508 miles per hour. That gave him his second pole of the season (the first came in the second race in Detroit on June 2) and gave him eight in his IndyCar career.

“We’ve only gone through half the journey this weekend,” Newgarden said of the race to come. “But I feel pretty confident that the PPG car is going to be strong and Chevy has obviously done (its) homework and given us a great package. The PPG Chevrolet was so good right off the truck. Once we finished practice, we didn’t touch it before qualifying.”

Newgarden’s effort as the final qualifier denied Sebastien Bourdais his 35th career pole and put his Honda-powered No. 18 SealMaster car on the outside of row 1. The four-time Indy car champion will start on the front row for the first time this season and helps take the sting out of crashing on the opening lap of last year’s race here.

Bourdais’ qualifying average was 185.927 mph (48.4062 seconds), and he thought it might be good enough for the pole. But then rookie teammate Santino Ferrucci (who was fastest in the first practice session) approached him. “He just told me before (Newgarden ran) ‘That pole will be yours,'” Bourdais said. “I told him, ‘Man, you just jinxed it!'” Indeed.

“A very strong run for the SealMaster Honda,” continued Bourdais. “It was a really solid effort and the guys gave me a great car. It felt very similar to Phoenix (took pole there in 2018). But you never completely know how things are going to evolve from the practice run. The conditions are so different. During the run, there was a lot of sliding around in Turns 1 and 2. I gave it everything I had and I’m just really pleased with the run.”

Bourdais’ performance was an anomaly as Team Penske took three of the top four qualifying positions, with last week’s Pocono winner (and defending Gateway champ) qualifying third. That would be Will Power in the No. 12 Verizon Chevrolet with a 185.896 mph (48.4142 seconds) lap.

Like Bourdais, Power also had to catch a slide in turns 1 and 2. “Yeah,” said Power. “On the second lap, I had a big moment in 1 and 2. The car was on the right rear and I had to catch and get out of the throttle, then get back on it. But the Verizon Chevrolet was good, though. Great job for Team Penske, we are all up there.”

Power was followed by Indy winner Simon Pagenaud’s 185.143 mph (48.6110 seconds) in the No. 22 Menards Chevy. Pagenaud, who is third in the standings with three races to go, now has a 41-point deficit to Newgarden.

“The first lap was very difficult,” Pagenaud said about his run. “The car moved around a lot. I was very active in turn 1 and turn 3. The car came alive on the second lap, though. I’m very happy with the performance. I think the No. 22 Menards team did a good job. Team Penske and Chevrolet—we are fast as usual. Should be a good race.”

After defending himself all week long for his role in the Pocono pile-up, Takuma Sato qualified fifth with a 185.050 mph, 48.6356 second lap in the No. 30 Mi-Jack/Panasonic Honda for Rahal Letterman Lanigan Racing.

“After the first practice, I felt positive,” said Sato. “We made great progress and I was able to commit in qualifying.

“I’m very happy for the team, they did a great job. It’s an extremely challenging track. Turns 1 and 2, and turns 3 and 4 have very different characteristics. The car was quite loose in Turn 2, but then nearly flat out in turns 3 and 4. It’s a fun track. I am optimistic for the race.”

As for the jinxer Ferrucci, he finished sixth in the order. “I’m really happy with our qualifying run,” said Santino. “We have good momentum going right now and things are going really well. The car was great in practice this morning and I was confident going into qualifying. I took it a bit easy on the first lap, but when I saw how great the track was I pushed harder on the second one. The No. 19 Cly-Del Manufacturing Honda was awesome in qualifying, so hopefully our race car will be as good and we can go out and pass some cars tomorrow.”

Seventh place James Hinchcliffe benefitted from his teammate Marcus Ericsson having tested at Gateway. “I have to thank the Arrow SPM team a ton on this run,” said Hinchcliffe. “We rolled off the truck with a couple of problems for first practice. Marcus was able to come here and test a few weeks ago, and he really helped develop the car from where we were last year. I have to thank him a lot, this is his setup.

“He was obviously quick in P1, and we had all sorts of problems and just didn’t get a good run in. For me, I kind of had to just pony up and get after it. Because we were able to go after Marcus, we knew what the car had. Very happy for the Arrow Schmidt Peterson Motorsports guys and the Arrow car.”

Third in the points race and trailing Newgarden by 53 points is Chip Ganassi Racing’s Scott Dixon, who qualified eighth at 184.293 mph, 48.8354 seconds, in his Honda. “I’m not sure if we had an issue with where our tire pressures were at or something, but it just kind of felt weird,” said Dixon. “The PNC Bank car was a lot better earlier in the day, so I think we need to learn a bit more why that was the case. I think if we ran another lap or two we would have been faster. I think our car will be good on the longer run for sure, and I’m excited for the race.”

Last week’s big wreck happened in Dixon’s wake, and one of those involved was Ryan Hunter-Reay. He’s qualified ninth at Gateway. “We were a little loose there on Lap 2 in turns 1 and 2, and had understeer in turns 3 and 4, and had to lift on lap 1 a little bit,” said Hunter-Reay. “We just missed the balance a touch. It wasn’t much, but it doesn’t take much around here. We’ll focus on practice tonight and try to make a good racecar. I think it will be a one-groove race and track position will be important, but we’ll do all we can to try to take the DHL car to the front tomorrow.”

Dixon’s teammate Felix Rosenqvist was the only driver injured at Pocono, and he’s qualified tenth at Gateway. “Last week was tough,” said the Swede. “We only did one lap (not even) and more than anything we missed out on the experience of running the whole 500 miles.

“But this is a new week. It’s a new track and a new car, too. And even a new partner in Monster Energy. It’s not new to our Ganassi team (in NASCAR with Kurt Busch), but it’s their first time as an IdyCar primary sponsor and we’re excited about this partnership.

“Our car wasn’t bad in qualifying, but I’m confident we can improve for the race. We tested here a few weeks ago so I’m pretty comfortable around here already.”

The meat in the Sato/ Hunter-Reay sandwich was Alex Rossi, whose qualified here in 11th. “Last year we had a car here that was really quick, leading both practice sessions,” said Rossi. “It is a little bit different experience this weekend, but we have one more practice session to dial it in. The NAPA Andretti Honda just isn’t where it needs to be.”

Rossi will, as usual, wring everything out of the car that there is to wring.

NTT IndyCar Series driver Graham Rahal was excited to bring hockey star Colton Parayko closer to the racing action this weekend, but the Rahal Letterman Lanigan driver said Parayko has plenty of experience with the sport.

The member of the Stanley Cup champion St. Louis Blues used to attend Indy car races in Edmonton (he’s from Alberta) and attended his first Indianapolis 500 five years ago. He also has watched races in Toronto and here at World Wide Technology Raceway at Gateway over the years.

“In all aspects of life, he’s a pretty modest guy,” Rahal said. “He acts like he’s a newbie around here. He’s been around quite a bit.

“We were at the Toronto race (and) this guy just shows up. Never had asked for a ticket or anything – he kind of showed his true colors there. Obviously, (he) just enjoys coming out to the races.”

Parayko said the attraction was speed. “I just think everything that goes into it is cool,” he said of INDYCAR racing. “You get a new appreciation for it when you come to the race. Bringing a couple of teammates (to Saturday’s Bommarito Automotive Group 500). Every time (I) bring new guys (to the track), new teammates, they’re like, ‘Wow, this is amazing, so cool. I agree.”

Joining Parayko at the track Saturday will be Blues captain Alex Pietrangelo, who will bring the Stanley Cup with him for an opportunity to share the NHL’s ultimate prize with INDYCAR fans. After that, Parayko will ride in Honda’s Fastest Seat in Sports that paces the field in pre-race.

“It’s such a cool experience. (It’s) not close to any kind of appreciation to what these guys are feeling, what they’re going through going at a little bit of speed and going around the corners and stuff.”

story by Tim Hailey and IndyCar