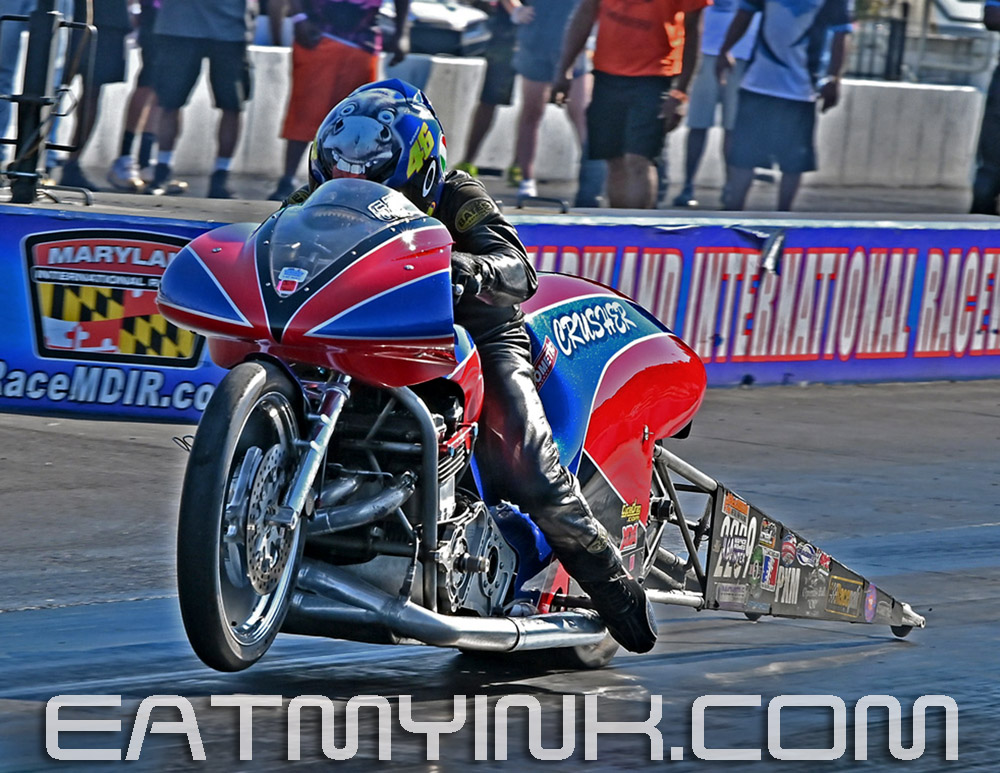 The “Crusher” bike is a little bit like that fun girl at the neighborhood bar—all your friends have ridden her but they’d do it again and a again and love her every time! Richard’s uncle Rickey, Darion “Nanu” Payne, and Eran Pielert are just a few of the studs that have ridden “Crusher” hard and put her up wet to win again.

“I haven’t ridden the 4.60 bike at all this year,” said Gadson. “I didn’t want the ‘Championship Curse,’ where you usually suck the next season. Plus, I started this year wanting to slow down with riding so many classes.

“I had built a new Real Street bike, and then Jason (XDA’s Jason Miller) implemented ‘Running of the Bulls,’ so I had to make some sacrifices or else I’d be in every pro category there is and all of those classes run back to back. It’d be impossible!

“On top of that, after my accident in Virginia, I didn’t have the physical strength in my left arm to ride a wheelie bar bike. I tried to test a pro mod prior to the last XDA race and it really bothered my arm. That’s when I asked Crow (Crow Teasley, another man who has tasted Crusher’s pleasures) to ride for me and he did awesome!

“But this weekend, my Real Street bike threw a rod out of the engine first pass. And after talking to Brad, he pretty much convinced me to ride ‘Crusher.’ His exact words were ‘It almost makes financial sense for you to ride ‘The Crusher’ since you seem to always win on it—so go for it!’

“After receiving Brad’s blessing, I decided to jump on it. I didn’t test at all, and first qualifying round I went 4.595, followed by a 4.611, and a 4.608. That’s three passes all within .016 of one another! I pretty much have this bike down to a science with knowing what changes to make in order to run the number, so my biggest challenge is just to do my job cutting a light.

“When Sunday came around I felt good about my chances. It was a HUGE field (40 bikes qualifying for a 32 bike field) and everyone was on the number—it was crazy.” Ellis Pierce took the number qualifying position with a dead-on 4.600. Richard was seventh with a 4.608.

“But as I looked through the field and their numbers, I knew a lot of people struggled with consistency. I get pretty ridiculous with finding my consistency, and my focus all day was to get to my ‘spot’ that I roll into the stage beams before I stop. I was able to get there all day, and we came up with the win in the toughest and biggest field ever. Not bad for a spur of the moment decision to ride it. I’m pretty proud of this one!”

Richard was also proud of the run he, Mummert, and team put together on Brad’s bike.

“Our Pro Street bike is really a beast!” said Richard. “We had no idea how fast the bike was because we struggled all year with the back-half tune up. We knew what it was after a certain point, but I’m still learning my way around the MaxxECU, and I hadn’t really found an effective way to fix the issue.

“Steve Nichols (supertuner and MaxxECU distributor) came over and I expressed my frustration with my inability to fix it, and he gave me a ‘Hey, do you know about this feature?’ idea. As soon as he started to say it, I already knew it was going to work and I had ideas on how to make it work, so ‘Big Thanks’ to Steve for the continued support. I know it’s tough for him, because we race against his main team (DME and Frankie Stotz)). We are all very competitive and I never want to ask him too much, for that reason. But when it comes to the functions of the ECU, and any questions I have, he’s always there. Sometimes I just gotta swallow that pride!

“The first pass after the change I went 6.66 at 210mph. I haven’t seen that speed all year, and that’s the first time the ‘breaking up’ issue we’ve been battling has shown any improvement.

“Again, we go back to consistency. On Sunday we just didn’t want to screw ourselves chasing a 60’ number. Johnnie Locklear, who taught and teaches me everything I know about tuning, told me not to ‘swing myself out of the game.’ So I stopped trying to hit a home run, and we just decided to make the competition beat us, which Jeremy Teasley and team DME (eventually) did.”

“All the action for me was second round though, against Ryan Schnitz. Somebody, I won’t say any names, LOL, left the #2 coil wire off. I had to jump off the bike at the line because I’m the only one who’s hands are small enough to put the coil plug on. When I tell you I was nervous, it’s an understatement. Man I was sick to my stomach at the thought of losing like that. I couldn’t get it on because I couldn’t really get to it for one, and also the coil kept rotating around when I tried to push it on. I had to take a deep breath and bite my lip, and then I got it to go on at the last second. Big thanks to Ryan and Cecil (HTP builder/tuner Cecil Towner) for the sportsmanship.

“Although we didn’t win the event, I still feel this was the best outing we have had with the bike. I’m POSITIVE 6.40’s are around the corner as soon as I find my eighth mile numbers again. Looking forward to VMP!

Some true veterans of the game took the weekend’s MPS Pro ET races. On Saturday, George Shriver and his 1996 Kawasaki competed against Dustin Lee on his 2008 Suzuki in the final. Lee turned on the red light to give the win to Shriver. Good job George!

On Sunday, David Ashton won Top Sportsman and was entered back into the sixth round of competition for a chance to double up. Ashton would win two more rounds to face Mike “Volleyball” Schulz in the final. Schulz, who sits just outside the top ten in points, nailed the tree with a .009 light and ran an 8.866 on his 8.85, leaving little space chance for Ashton. Good job Mike!

Lee is showing complete dominance In Shinko Tires Crazy 8’s this year with his third straight win. Fifty-seven racers competed this past weekend trying to consistently run the 8.88 dial, and after five round wins, Lee met number three in points Duane Jackson in the final. Jackson, who is over a hundred points behind Lee, was looking to gain a little ground with a win. But got greedy at the tree and lit the redeye, handing Lee another win.

Brock’s Performance Street ET saw about 130 racers competing each day. With this kind of turn out, these guys would have to win seven rounds of competition to make it to the final for a chance at taking the win.

On Saturday, wily Boo Brown and Russell Dennison Jr. were those final round contenders. Dennison had the advantage on the tree going into the final with a better reaction time average over Brown. However, he was treading dangerously close to the edge his last few rounds of competition and it finally bit him. He turned on the red light on to send Boo to the winner’s circle before the race even started. Mark Blake won on Sunday.

“Paint The 1/4 Pink” ran for for the seventh year in a row to help raise awareness and money for the “Bikers Against Breast Cancer” foundation. The all-female class of twelve raised $12,266 dollars for the foundation before going to battle on the track. Last year’s winner, Robin Procopio, took the number one qualifying spot with 8.048, but Robin would not repeat when Dystany Spurlock got the win over her in the semi.

story by Tim Hailey with material courtesy of XDA, photos by Terrence Belton and Kwame Olds