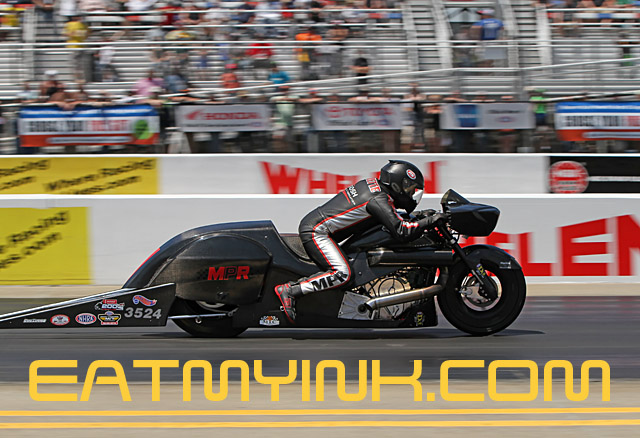 “Imagine how all this makes me feel?” Mark Paquette asked about NHRA’s recent obsession with bellypan dimples, and he has a point.

Paquette made the move from Pro Street to NHRA Pro Stock Motorcycle a few years ago, buying his own bike after renting around.

“I wanted an S&S Gen2 motor, so I bought a Victory Gunner. Then the Magnum body came out, and that was gonna be so much better so I had to have one.”

Then Polaris killed the Victory brand, and opened up the door to putting Buell bodies on the Gen2 motors. “The Buell was a better body, so I got one of those.”

That’s three bodies, but even at $6-7000 a piece, the worst was yet to come—the second generation EBR body priced at $25large. In the never-ending quest to be and stay competitive, Paquette decided he’d better get one. And now, before it is even fitted to his bike, NHRA has decided that the EBR’s dimpled bellypan is illegal.

“NHRA allows them to sell these things for whatever price they want, lets them race for two years, then all the sudden decides they’re illegal,” grumbled Paquette. “Someone should be paying for this!”

And according to Matt Smith’s Facebook Live webcast yesterday, somebody will be. Hector Arana markets the bodies and Smith said Hector will be supplying replacements at his cost.

That should work fine for Paquette, who’s hoping to be back out at Indy. But it will be interesting to see how the Gen2 EBR teams (Cory Reed and Joey Gladstone have the dimpleless Gen1 EBR bodies like the one Chip Ellis rode on Junior Pippin’s bike) patch their dimples this weekend in Sonoma.

Paquette’s time this year has been spent growing his surgical instrument maintenance business during the week and hitting all the major Junior Dragster races with his daughter on weekends. Hope to see him at Indy.