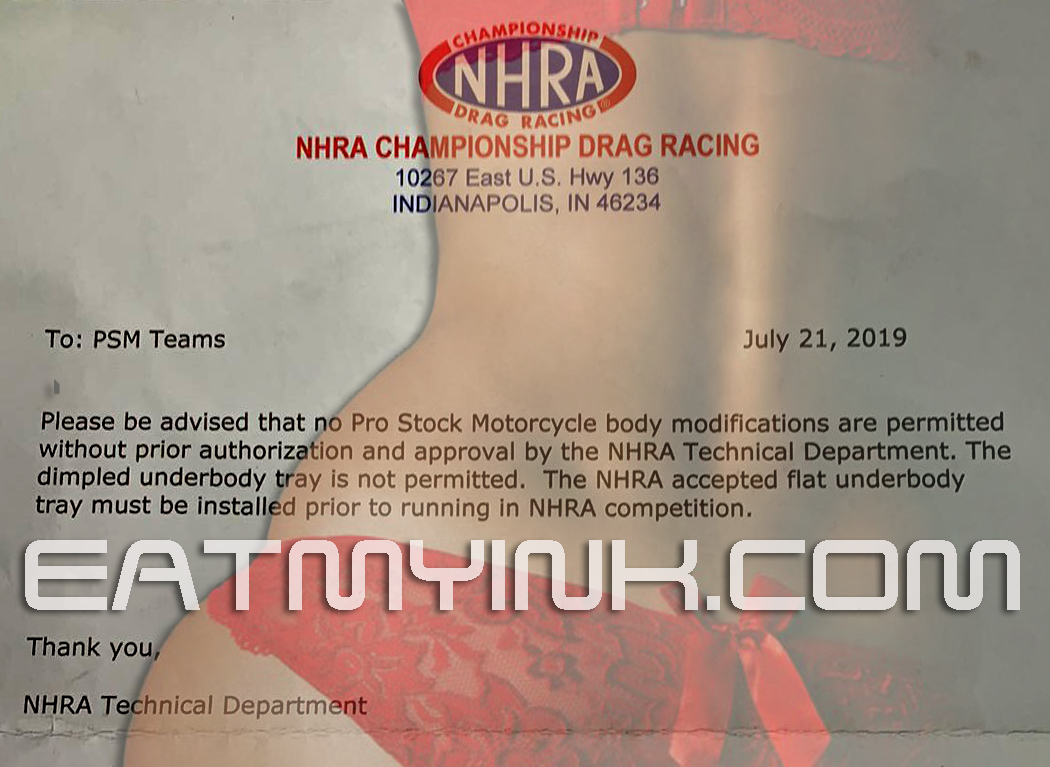 NHRA’s directive to EBR gen2 racers to delete their dimples in less than a week’s time has left the teams in a quandary about how to kit out for this weekend’s Sonoma race, which includes the Pro Bike Battle. On top of that, I’m told that NHRA will have a no-tolerance policy at the scales: any covering that sucks into the dimple at speed will cause that run to be DQed.

That leaves a vinyl wrap a risky choice, if the wrap sucks into the dimple even slightly. Ryan Oehler joked that he was a considering a wrap with a dimple print pattern….he might want to rethink that idea…

Some teams, I’m told, are covering their bases with both a wrap and a cut-to-fit, carbon fiber cover available in case the wrap isn’t sufficient.

The teams have been told that duct tape can be used to cover the dimples, but that’s just tacky.

Hector Arana, who markets the bodies, cannot have replacement bellypans available in time for this weekend’s race. Hector maintains that the dimples were part of the body at the time of approval, although NHRA’s letter states otherwise.

I sent NHRA this email: “I’m getting conflicting statements about what was and wasn’t approved by NHRA regarding the belly pans of the Gen2 EBR bodywork. Do you have drawings or photos of the approved design?”

Their response—which I consider to be official wording— left much room for interpretation: “The part in question is currently not approved for competition within the Pro Stock Motorcycle category.”

Currently….does that mean that it was previously approved? Or could be approved (again) down the road? Of course, no drawings or photos of what was approved were supplied.

The gen1 EBR body, now run by Cory Reed and Joey Gladstone, was considered a stability risk by the Arana team when it first came out a few years ago. When asked if racing the newer body without dimples presented a stability problem, Arana replied “I don’t know, I’ve never run it without the dimples.”

There’s a lot of anger, of course, about how we got to this point with a two year-old part being suddenly unapproved on the same weekend that Vance & Hines/Harley-Davidson debuted their brand new FXDR body—reinforcing every dirty thought the field and fans have about the brand and their cozy relationship with NHRA. You can see Matt Smith’s Facebook Live rant either on his page or in the Eatmyink Facebook Group.

The EBRs of Oehler and Matt Smith both ran higher MPH than the FXDRs at Denver before the EBR racers were handed the letter outlawing their dimples. “It’s funny timing because V&H is preparing to announce the sale of a PSM FXDR and ‘Damn!’ Those bikes that cost 50k less are several MPH faster,” noted one PSM crewmember.

“Either way, in the days leading up to a weekend at one of the fastest tracks in the world, the little guys are punished for making the class look good. God forbid a guy like Ryan Oehler gets to 200 before Andrew Hines. That would be unacceptable.”

Ouch. I texted V&H’s Eddie Krawiec for more information regarding the rumor of V&H Harley’s for sale but received no response.

And let’s not forget that many Suzuki teams have grumbled about the aerodynamic efficiency of EBR gen2 bodies, even though their own shortcoming is horsepower and not aerodynamics.

Let’s hope no one is DQed—or worse, injured—this weekend for any legitimate, safe attempt at a hack demanded in a very short time frame by NHRA.