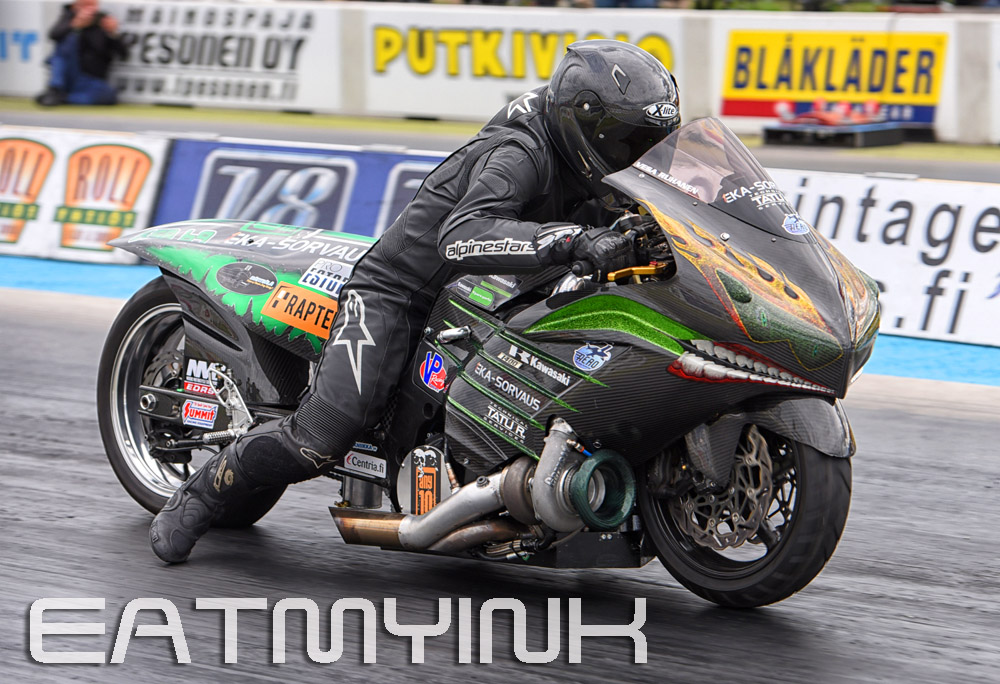 The EDRS Pro Nordic Motorcycle Championship is at the halfway point of the season and, with the Drag Challenge at Gardermoen Raceway in Norway, the riders kick off part two of their title race.

After two races, Marcus Christiansen, Filippos Papafilippou, Fredrik Fredlund and Vesa Ruhanen are the leaders in their respective categories. Gardermoen will welcome some new winners and after round three it will be clear who is still in the title race when the EDRS Pro Nordic MC travels to Tierp Arena for the grand finale.

With the traditional Drag Challenge at Gardermoen Raceway, the EDRS Pro Nordic Motorcycle Championship visits the third track and the third country in the series. The first round at Tierp Arena was record setting and after Kauhava it was more visible who were the favourites to claim the 2019 titles. But the Gardermoen race will be totally different from rounds one and two. Tierp and Kauhava also counted for the FIM Europe European Drag Bike Championship. Gardermoen doesn’t, and with the Hockenheim FIM race only two weeks after Norway, some riders from the top of the championship standings are missing from the entry list. But this also opens the door for some other riders to score a win, gain more points and fight themselves back in the title race.

Reigning champion Marcus Chistiansen is leading the championship after two races, but the Danish rider will not be at Gardermoen. The same is true for Kauhava winner and number two in the title race, Harri Piensalmi.

The highest placed rider in the championship who will be at Gardermoen is Torsti Kettula. The Finnish rider is improving with every race and with a good result in Norway, he can score the points he needs to claim a top three position in the championship after three races.

Teemu Kettula is the second Finn at Gardermoen and together with Greger Johansson from Sweden, he will have to fight four riders from Norway. Svein Olaf Rolfstad, Trond Jostein Høiberget and Kristin Hegre skipped the race in Finland, but they will try their luck again at their home track. For Erling Opheim it is the first outing in the EDRS Pro Nordic MC this season.

Filippos Papafilippou and Rikard Gustafsson have been the stars in Top Fuel Motorcycle so far this season, but as both riders run the FIM series, the numbers one and two in the championship will skip Gardermoen.

This opens the door for Kauhava runner-up and reigning champion Thomas Pettersson to make up some ground. The number three in the championship will meet tough competition from local hero Jan Sturla Hegre, the number four in the standing.

Hans Eriksson skipped the Finnish round, but after his Tierp Arena debut, the Swede will be back for his second race of the 2019 EDRS Pro Nordic MC season.

In Super Street Bike, the top four in the championship standing will also be present in Gardermoen. With two wins out of two races, Vesa Ruhanen and his Kawasaki are the leaders, and the Finn is still undefeated in the 2019 EDRS Pro Nordic MC season.

But don’t be surprised to see the first female winner in EDRS Pro Nordic MC Super Street Bike at Gardermoen. Ida Zetterström is in the number two position and the runner-up of Kauhava is eager to place her Lucky 13 SSB in the winner’s circle. And with a win, Zetterström can make the Tierp finale into a real thriller.

Anders Blanck is in the number three position and he will try to improve on his Tierp runner-up position. Kimmo Pulakka is the third rider from Finland in the top four and with his consistency always a force to be reckoned with.

Mathias Bohlin is the reigning champion and although he proved his speed in qualifying at Tierp, the rider with a Norwegian licence struggled with traction in eliminations and didn’t score the points he was looking for. As Bohlin skipped the Finnish round of the championship, it will be impossible for him to retain his title, but the reigning champion will definitely be out for revenge.

Björn Friström also skipped Kauhava, but the former champion will try to prove his form in Norway again. Dag Wagenius surprised in Tierp and will be back at his home track to score some more points and gain some positions in the championship standing. Also from Norway come Arild  Rundbraaten and Ole Johnny Johnsen. Both riders will have their first outing of the season in the EDRS Pro Nordic MC.

Pro Stock Motorcycle will only have one entrant at Gardermoen. Fredrik Fredlund and Janne Koskinen, the numbers one and two in the championship, are focussing on the FIM series, while number three, Kenneth Holmberg, also skips the Gardermoen round. Tierp Arena winner Kalle Lyrén has family and business commitments and will be back at the Summit Racing Equipment Internationals at Tierp. At this moment Bo Thorselius is the only Pro Stock rider on the Gardermoen entry list.

Super Comp Bike has 10 entrants at Gardermoen. With five riders from Sweden, three from Norway and two from Denmark, three countries are represented. After scoring points in both races, Peter Östlund is leading the championship, with Rasmus Östlund in second position and Peter Svensson third. These three Swedes will be in Gardermoen and they will be accompanied by Tomas Jonsson, the number six in the championship standing, and Emil Östlund.

In fourth position, Per Olsen from Denmark is the first non-Swedish rider in the championship. For his countryman Michael Jensen the Drag Challenge is the first race of the season. It will be great to see Kathrine Wagenius, the popular female rider from Norway, back in action after her unfortunate crash at Tierp. Also from Norway come Stian Horne and Kjell Ågnes. Both riders will score their first points in the 2019 EDRS Pro Nordic MC.

It’s great to see that there are no fewer than 12 entrants in Super Gas Bike at Gardermoen, and among them many new riders we haven’t seen before. Jenni Pekkarinen is leading the championship, but the female rider from Finland and last year’s number three is missing from the entry list.

That gives Trygve Kjærstad Helgerud, winner at Tierp and the number three in the championship, and number two Heikki-Juhani Koskinen, the opportunity to close the gap to Pekkarinen.

With eight riders, Norway is well represented in Gardermoen. Except Helgerud, all seven other Norwegian riders will have their first EDRS Pro Nordic MC race of the season. These riders are: Jonathan Edwards, Tore Hanzal, Linda Horne, Malin Johnsen, Lucas Marin, Wille Skinnars and Johnny Tveit. From Denmark come Mikkel Jensen and Bo  Sørensen. Niclas Johansson, the only Swede in SGB, is new to this year’s EDRS Pro Nordic MC.

For more information about the EDRS Pro Nordic Motorcycle Championship and the points standings after two races.

story and photos courtesy of Remco Scheelings for EDRS