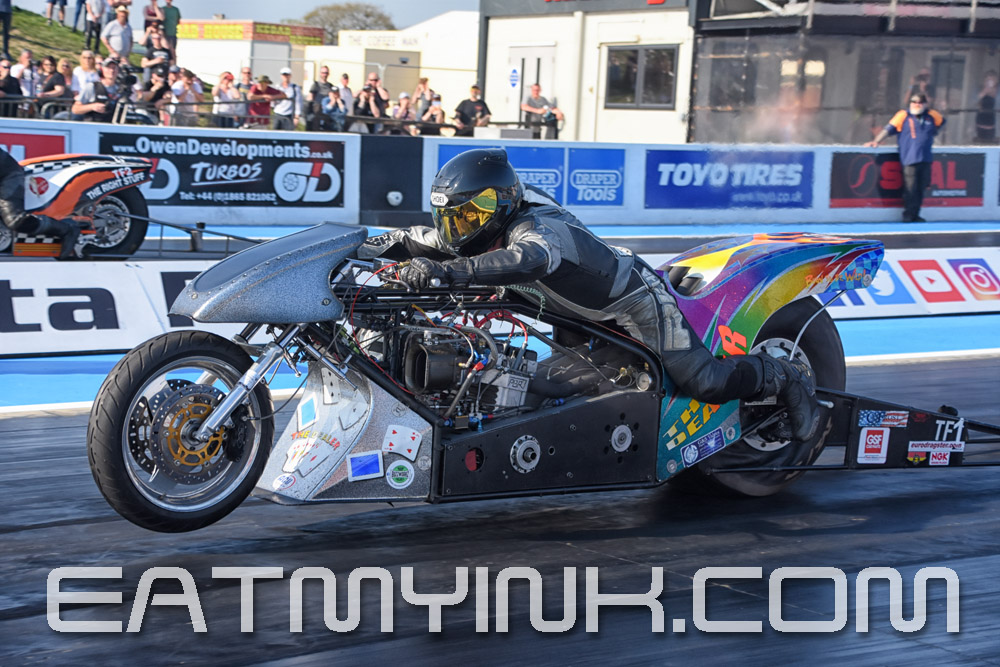 Twelve months ago it was very cold and wet with a slick Santa Pod Raceway on Easter weekend, which restricted the Festival of Power to no quicker than 8.5 seconds. This year the temperature was in the 70s for all three days of Round 1 of the ACU championship. Records were set, many personal bests were recorded, and there were a few new faces in the winner’s circle.

Reigning Top Fuel Bike champion Steve Woollatt started his defence of the title in stunning form, setting a new ACU ET Record of 6.062 during qualifying. Woollatt also ran a p/b of 189 mph at the 1/8mile.

Midgley was a no-show for the final due to a transmission/belt issue and Woollatt took the winlight.

Jiri Lukes has had a couple of years out of the sport and returned with his brother Jan, who had flown over from Europe to crew for Jiri. Lukes had a valve issue on number three cylinder and ran a best of 8.530.

Van Den Belt had a bye to the semifinals. Peters won on a holeshot over Crossley, 7.626 to a losing but quicker 7.616. Batcheler got very close to the centre ine and was trying to stay in his lane, and Lukes got to the finish first and had a bye to his first ACU final.

Van Den Belt beat Peters to face Lukes in the final. Kars got out the gate first but slowed at mid-track and Lukes took the winlight and his first ACU event win.

Sean Mills managed to finish on top of the Comp Bike qualifying pile with a 7.519-193.05 despite a broken water pump and selector.

Louis Davies made his debut in Comp Bike on the ex-Nick Daniels Funny Bike, recording personal best figures of 7.601-171.07.

Rudolfo Maduro is running on methanol this season and was looking for a baseline, running a best of 7.772-189.00. Next was Thurtny Martina’s 7.826. Den Antonia suffered wheelie issues during qualifying and ran 8.011. Reigning ACU Comp Bike Champion Margot Schmidt struggled in qualifying with an 8.105. Phil Leamon was next with an 8.522 followed by John McLean Jr. on the ex-Rob Wilkinson bike at 8.743. Chris Neary was on the bump spot 8.799. Valentijn Sandtke found metal in his engine oil (two pounds oil pressure) and was out of the show.

Leamon had a bye to the final when Martina was a no-show, and  Davies reached his first ACU final after knocking out Maduro.

Reed broke in the burnout box, leaving Venables a bye run. Steve damaged a cylinder head and had to fit his spare motor for the semi-final.

Dainty had a water pump fail while warming up his engine.  Thomas came in as an alternate, but he too had a fluid leak on the start line, leaving Bowe a bye run. Balchin went quicker in his race with a 7.089 to knock out Smith’s 7.515.

The crowd were hoping for the first side-by-side six second passes of 2019. But Bowe came into stage and had a fluid leak and was told to shutoff. Venables stormed down the track and ran a jaw-dropping 6.836 to set a new ACU ET record of 6.815—damaging another cylinder head in the process.

Multi-time Champion Jake Mechaell has sold his 8.50 championship-winning bike to Alan Morrison, who ran 8.527 to become the number one qualifier just ahead of Ian Chrichlow’s 8.529.

Newcomer and former Sportsman ET champion Craig Wright was second with a 9.529. Stacey Reed was next with a 9.551. Adam Burns had a new clutch set-up and getting better with every run.

Morrison Jr. took out reigning champion Richard Sawatzki in the semi-finals and faced Burns, who had a bye run in the semis.

Burns pulled a big wheelie at the 60ft mark and still took the winlight 9.508 for his first national win. Morrison Jr. ran 9.561.

Les Harris dominated the event with 9 second runs. He ran low ET of  9.693 for the number one qualifier, ahead of Chris Nimmen’s 9.864 and champion Michael Gooding’s 9.992.

Harris had a bye run to the final and Gooding beat a troubled Nimmen.

This was the first of a four round Funny Car series. John Smith from the USA was crew-chief for two of the four cars entered for the event. Both cars were one and two in the qualifying, with Kevin Chapman running 4.718 and Kevin Kent 5.099. Kent had to do an engine change during qualifying.

Jason Phelps had a new MSD ignition system and ran 5.326.

Steve Ashdown blackened his crankshaft and fitted a short motor, only to have an oil leak. The team worked through the night till 10:00 am on race day and Ashdown called time. He didn’t want to have anymore damage, and to find out the problem of the oil leak.

There were a few Pro Modified personal bests set at this meeting.

Harteveld redlit against Slyfield in the final.

Liam Jones ran some storming numbers 3.907, 3.908 and 3.923 over the weekend in preparation for the European FIA Championships.

Susanne Callin returned to Top Fuel after a 14 year lay-off and ran a best of 4.613 in the ex-Jari Halinen car.

Maja Udtian was driving the ex-Antti Horto car and ran a best of 5.253 over the weekend.