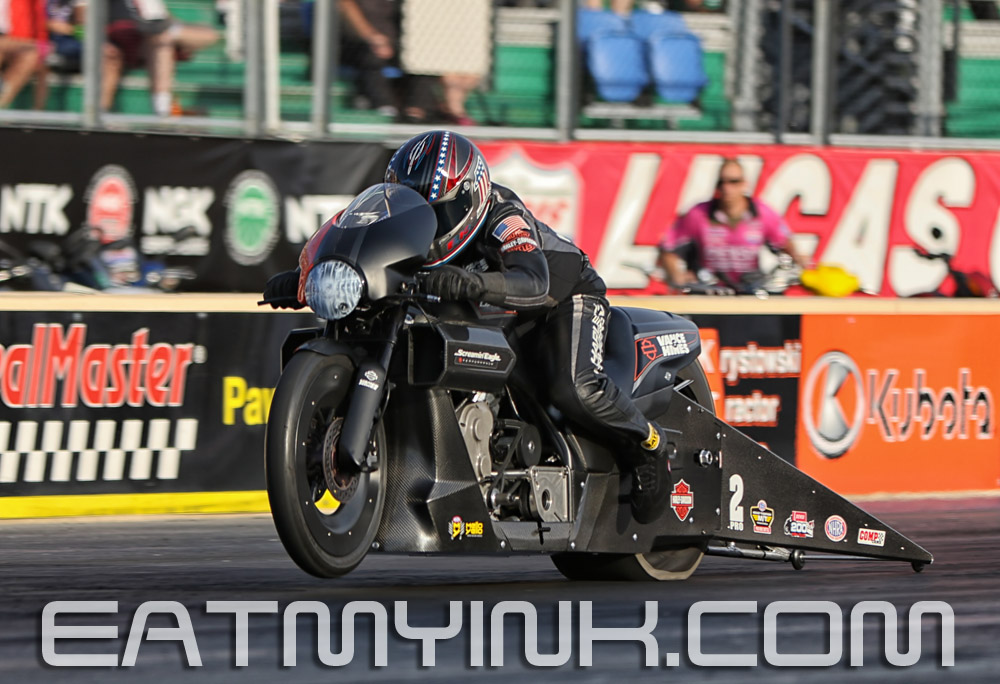 Eddie Krawiec landed atop the Pro Stock Motorcycle order with a lap of 6.844 at 197.08 miles per hour on Friday at the 13th annual Summit Racing Equipment NHRA Nationals at the halfway point of 2019 NHRA season. Hot on his heels are his teammate Andrew Hines in second, with reigning world champion Matt Smith best-of-the-rest in third.

Ron Capps powered his Pennzoil Synthetics/NAPA AUTO PARTS Dodge Charger SRT Hellcat to an impressive 3.879-second pass at 329.18 mph to land the Funny Car provisional No. 1 qualifier. Behind Capps in the Funny Car field is John Force, who is chasing his 150th career win, in second while Jack Beckman is third.

The Capps team started the weekend by unloading with a stout 3.965-second pass to earn the No. 2 spot at the conclusion of Q1.

When the Rahn Tobler-led team returned for Q2, they watched as driver after driver improved upon their earlier passes, shuffling the 20-car field. By the time the Pennzoil/NAPA team pulled up to the line they had been bumped back to the No. 9 spot. The team knew they would need to lay down a quick pass to break back into the top half of the field and better their chances at having lane choice come Sunday morning. Tobler turned up the wick, and Capps launched the Pennzoil Synthetics/ NAPA AUTO PARTS Dodge Charger SRT Hellcat down the track in 3.879 seconds at 329.18-mph to capture the provisional pole.

“That was a fun session. We saw all those cars make those throw-down runs,” said the 2016 Funny Car world champion who celebrated a birthday the day prior. “Tobler probably came back to the car to make adjustments more time than he ever has. John Force was early in the session, and we saw him run that 88, so Tobler made some out-of-the-box changes that were pretty different from what he usually does. We knew we were either going to go to the pole or smoke the tires, and that’s always fun. Big sigh of relief that it made it.”

Capps, the 2016 Norwalk event champion, is hoping the Pennzoil/NAPA team’s Friday momentum will carry into race day and they’ll have an opportunity to put their one-off paint scheme in the winner’s circle.

“We’ve had so much fun running these special liveries with NAPA and Pennzoil, and this is such a fun scheme with the blue paint splattered back on it,” said Capps, who bagged the 2018 Seattle Wally trophy the last time he ran the Pennzoil/NAPA paint scheme.

“Anytime you get a sponsor like Pennzoil ask you to run a special car, you obviously want to do well for them. And to debut that car and win the race in Seattle was awesome and then to be No. 1 tonight, if we can win again in this paint scheme, that would be a great thing.”

“Conditions here are always good when the sun goes down,” Capps said. “(Rahn Tobler, crew chief) put the rear spoiler down and did things outside his box he normally does. It was kind of neat to see that we were either going to go to the pole or smoke the tires but he was going to try and that’s always fun.”

Force and the PEAK Coolant and Motor Oil / BlueDEF Chevy Camaro SS team had problems at half-track and shut off early in the first qualifying session to run a 4.230-second pass at 228.15 mph. The 16-time Funny Car world champion came into the second session sitting in tenth before running a stellar 3.884-seconds at 329.02 mph under the lights to end Friday’s qualifying in the No. 2 spot.

“Our car went, it was really hunting down there in that second pass. Tomorrow’s a new day but I’m excited for this PEAK team. Brian Corradi and Danny Hood, they really know this car and I’m just learning,” said Force who picked up two bonus points in the night session. “Brittany is No. 1 right now with the Advance Auto Parts dragster, and Robert and Auto Club, and the Prock kid with Montana Brand / Rocky Mountain Twist are qualified, so I’m hoping tomorrow we can all do better and stay in it. This is a great race track, the Bader family, they really know how to put on a show. The weather created some issues, but I’ll tell you, it was beautiful today and that should tell you how the rest of the weekend is going to go. And did you catch the fireworks? I’m telling you, they do it all for the fans.”

After smoking the tires, Robert Hight and the Automobile Club of Southern California Chevy Camaro team closed out session one with a 4.346-second pass at 205.54 mph. In his second pass, Hight put down a 3.938-second pass at 297.81 mph improving his positioning from No. 11 to No. 9.

“We had problems in the first session and didn’t put up the numbers we were hoping for but we came back in the second and did better,” said Hight. “I’m confident in this Auto Club team, and Jimmy Prock and Chris Cunningham will get this thing going tomorrow and I think we can make some consistent passes and move up into the top half.”

Brittany Force drove her way to a 3.712 pass at 328.38 to place her at the top of the Top Fuel category. Leah Pritchett is currently second with her 3.714 lap, while Mike Salinas, the most recent event winner, sits third.

Coming into the weekend sitting fifth in the NHRA Mello Yello points standings, Brittany started Friday’s qualifying with a 5.965-second pass at 111.01 mph after losing traction and shutting off her Advance Auto Parts dragster to sit in the No. 12 spot. Force’s performance improved in the night session when she laid down a stout 3.712-second pass at 328.38 mph to take the No. 1 spot and pick up three bonus points.

“You know, I’m feeling confident going into this weekend. The Advance Auto Parts team stayed after in Bristol and tested all day Monday, and we were hoping to find some things and figure it out before coming to this last race of the four in-a-row, and I think we did that. That first run we didn’t get down there, but that second run was a beautiful run. Putting a .71 on the board, it was awesome and stealing that No. 1 spot,” said Brittany. “I’m looking forward to tomorrow. We‘re hoping for two more consistent runs, that’s what we really need going into race day and our plan is to go out and win this thing. We’ve definitely had our ups and downs, so it feels really good to celebrate this small victory and we’re hoping to fight all weekend long.”

Austin Prock and the Montana Brand / Rocky Mountain Twist dragster smoked the tires in their first pass of the day making a 5.732-second pass at 122.06 mph to sit in the No. 10 spot. Prock, like most of the Top Fuel class, improved in the second session and made a 3.776-second pass at 324.90 mph to start Saturday’s qualifying from the No. 11 spot.

“We struggled in Q1, we’ve been fighting with some problems in the clutch department, just trying to get the wear under control and to be consistent. For Q2 we changed quite a few things and it went down the track. It wasn’t the fastest run but it was a nice, clean run. The parts looked nice and all the clutch management functioned properly, so it was a good rebound but we still have to be better,” said Prock. “I know Mike Green and Ronnie Thompson; they’re heading in that direction and they’re determined. They’re not very happy with our performance lately and they definitely want to be at the top of the chart so I’m just going to keep on holding on and try and do my job, and the car will come around. This Montana Brand / Rocky Mountain Twist team is smart and they’re going to keep fighting until we’re there.”

Deric Kramer currently sits first in Pro Stock after his run of 6.559 at 210.18 pushed him to the top of the heap. Matt Hartford and Chris McGaha round out the top three.

Shane Tucker wrapped up a tough day of qualifying in his new Auzmet/StructGlass Chevrolet Camaro. The young Australian brought out a new Pro Stock race car and his team spent most of the day fine tuning his Camaro.

“We made the first pass with this race car in the first session,” said Tucker. “We just wanted to get a lap on it and then start dialing it in. It felt pretty good and I knew we could get it back in the pits and make it even better.”

The first run of 6.841 seconds at 201.70 mph was enough to slot Tucker and the Auzmet/StructGlass Camaro in the No. 16 qualifying position. There are seventeen Pro Stock race cars on the property.

In the second session Tucker was looking to improve and move up in the qualifying standings. Tucker’s Chevrolet Camaro rolled up in the left lane. When the tree activated Tucker took off and the nose of his race car lurched up and continued to rise as he accelerated down the track.

Unfortunately, a trans ratio and weigh distribution issue created this situation and Tucker was forced to lift when the front end landed. The good news was Tucker recorded his quickest 60 foot time of the season so the team knows they are moving in the right direction.

“That was a wild ride,” said Tucker. “The front end came up so much I was just looking at the sky and didn’t see the track for a bit. When it came down I had to lift. I don’t think we hurt anything on the car which is good. We can get the wheelie bar adjusted and we’ll be good to go tomorrow.”