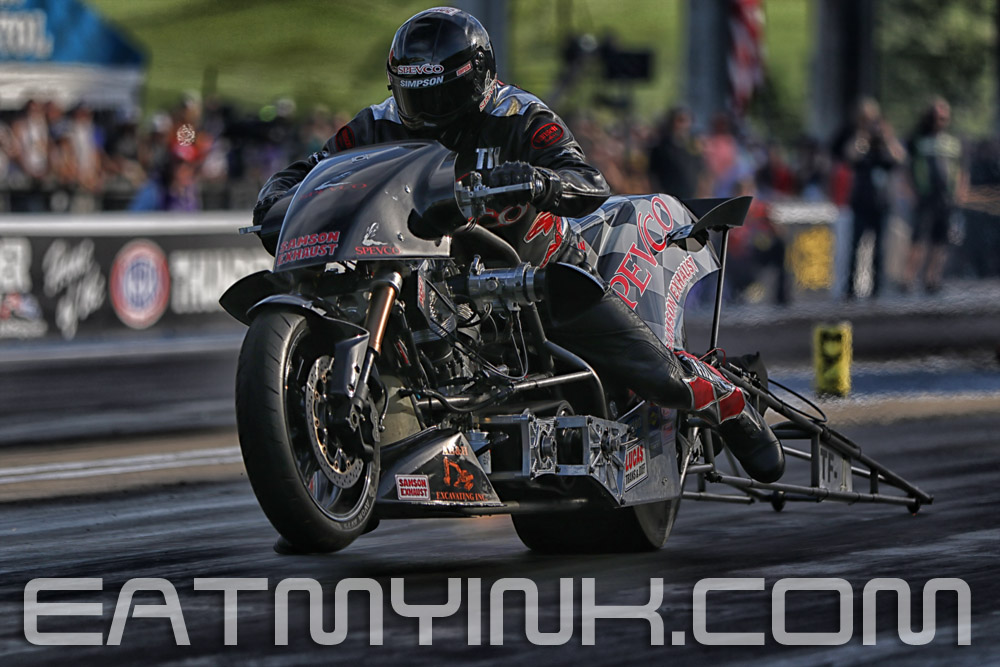 No matter what happens in round 1 of Top Fuel Harley today at the NHRA Thunder Valley Nationals at Bristol Dragway, there will be major championship implications.

Last year’s championship came down to the final 660 feet at Indy, when Doug Vancil dropped a cylinder and Tii Tharpe thundered to the win. This year Vancil is second in points, a handful ahead of Tharpe. With Vancil qualified fourth and Tharpe fifth, they face each other in round 1 of eliminations today at 1:45pm.

How Tharpe’s bike handles when he cracks the throttle will be a bit of a mystery. A new tire put on the bike yesterday kept pushing the bike to the left, even when Tharpe compensated on his line-up routine. “So we’ve turned the tire around and adjusted the wheelie bars, now we’ll see what we’ve got,” said Tharpe.

No matter which way the bike throws him against Vancil, Tharpe is not not likely to let out today like he did in qualifying.

Another key match-up is between points leader Beau Layne and the always dangerous Rickey “Sharky” House. Beau is qualified third with a 6.35 at 227.88 while Sharky is 6th with a 6.39—that’s how close the field is!

Number one qualifier Jay Turner broke a crank yesterday, but his first shot (6.31) held up through four rounds. He faces Tracy Kile (6.49).

Mike Scott’s Jay Turner Racing bike has basically been the best bike all weekend, running consistently and sitting second with a 6.34. He faces Bob Malloy, who qualified number 1 and runner-upped last weekend in Topeka but had to bump his way into the field in Q4 here in Bristol.

In the E3 Spark Plugs NHRA Pro Mod Drag Racing Series presented by J&A Service, Todd Tutterow picked up his first career No. 1 qualifier in the class, a week after he crashed in Topeka. Tutterow, who is second in points and has one win in 2019, raced to a class-best time of 5.774 at 248.66 in his supercharged Al-Anabi Performance Camaro.

“I know we would we make a good run, but it’s just confidence in the car and confidence in my crew,” Tutterow said. “As many changes as we made, I thought it turned out pretty good.”

Doug Kalitta powered to his first No. 1 qualifier of the season after his run of 3.755-seconds at 324.67 mph in his MAC TOOLS dragster from Friday held up. It is Kalitta’s first No. 1 qualifier since 2017 and his first career top spot at Bristol Dragway. Kalitta, who has 45 career wins, will meet Cameron Ferre in the first round of eliminations on Sunday as he seeks his second win of 2019 and fourth in Thunder Valley.

“It would be perfect timing to get a win, that’s for sure,” Kalitta said. “With it being Father’s Day weekend, I’ve got my son here with me this weekend, so it would be a great thing. We’re going to work our tail off to try to make it happen, that’s for sure. My car has been pretty consistent, so we’ll see how it goes. It’s been a lot of fun and we want to keep it going.”

Leah Pritchett qualified second with a 3.757 at 323.04, while points leader and defending champion Steve Torrence, who has five straight wins, will start eliminations from third after his 3.768 at 326.00.

In Funny Car, John Force—who is looking for his 150th career victory—earned his third No. 1 qualifier of 2019 and 158th in his standout career thanks to his pass of 3.911 at 326.95 from Friday in his PEAK Chevrolet Camaro SS. The 16-time world champion is after his fourth win at Bristol Dragway and Force will try to become the first Funny Car No. 1 qualifier to ever win at the track.

“I’m in the game, feeling good and we’ll go out there tomorrow and see if we can win some rounds,” said Force, who has two career No. 1 qualifiers in Thunder Valley. “You can win from anywhere in this class. I go out and do the best I can, that’s all I can do. You’ve got to be good to win and my car is coming around. It’s fast and I’m starting to come around, too.”

brought to you by Ben Knight accommodations!