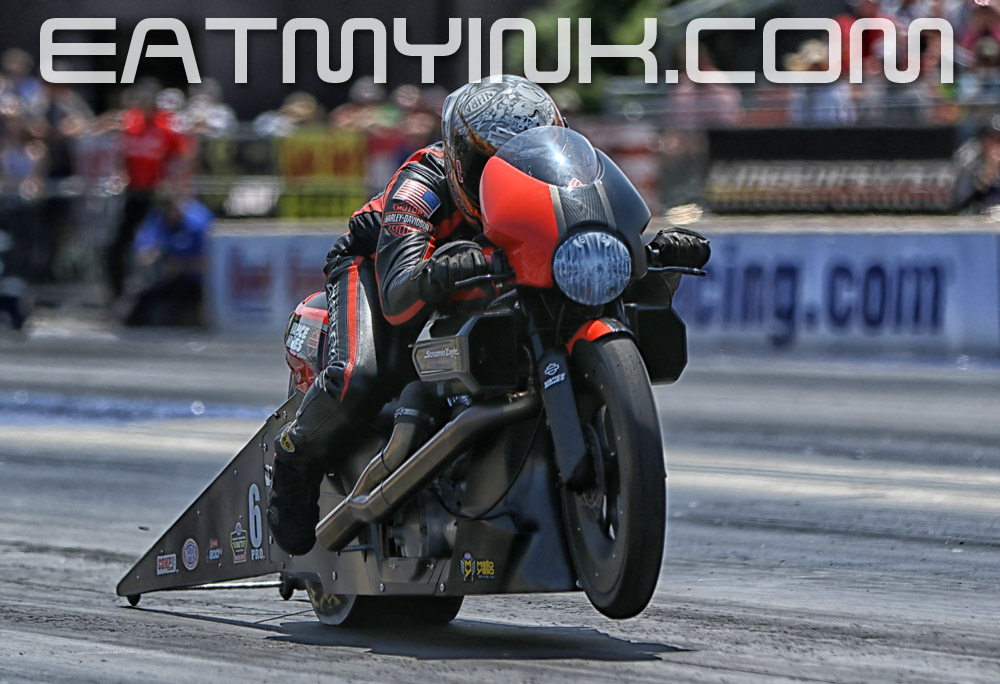 Five-time Pro Stock Motorcycle world champ and points leader Andrew Hines rolled to his fifth win out of seven races in 2019 at the 13th annual Summit Racing Equipment NHRA Nationals at Summit Racing Equipment Motorsports Park. Hines’ best season result has been six wins in one season. “(One more) win could take a while to come, you never know how these races pan out,” said Andrew, who’s Norwalk win was a PSM-best 53rd in his career. “The competition is tough and every round they make you earn it.”

“We had different conditions today than the rest of the week—which threw us for a little bit of a loop—but for some reason my bike tends to work well on a greasy track,” continued Hines, who won his fifth Norwalk ice cream scoop. “Our guys do a great job making sure we have phenomenal motorcycles.”

Krawiec was number one qualifier throughout the weekend and reached the final round for the 83rd time by knocking off Michael Ray, John Hall and Scotty Pollacheck.

Pollacheck had his best outing since returning to Matt Smith Racing. He was “best of the rest” with a 6.905 in Q1 behind Krawiec’s 6.87 and Hines’ 6.89. “He finally shook the Suzuki off him and got back to V-twin riding,” said tuner Michael Ray, who beamed proudly about Pollacheck’s work ethic and attitude.

Scotty raced to the semis where he spotted Eddie .037 at the tree before the bike failed to shift on the big end. “We think it broke the transmission,” said Angie Smith.

Ray was back out riding the MSR Victory and further testing the Maxx ECU. “There’s just so much more this ECU can do than we need,” said Ray. “It’s perfect for the Pro Street guys, but we can’t use half this stuff at NHRA.”

Michael was once again paired with Krawiec in E1 as he had been at Joliet. There, Michael was pondering how to get into Eddie”s head. “I’m gonna tell him ‘Hey, I got nothing for you, JUST DON’T REDLIGHT….'” Michael said, and then I watched him say just that, hoping the words would echo through Eddie’s head like a bad earworm during staging.

Of course, Eddie was unaffected in Joliet and now Michael was pondering what to do with Eddie in the lanes here in Norwalk. “Give him a big hug and tell him you love him,” I suggested. Michael failed to follow my advice and lost to Eddie again…..

Matt and Angie faced each other in round 2, where Angie went -.011 red against hubby and ran a 6.91 to his .90. “I feel like we got three fast bikes that can go rounds on Sunday,” said Angie.

Pollacheck beat Joey Gladstone in E2. The day’s best battle at the tree came between Gladstone (.007) and Hector Arana Jr. (.016) in E1, before Arana’s throttle position sensor broke on the backhalf.

I spoke to Gladstone’s former engine builder on the Cory Reed Racing team, Larry Morgan. “I really miss working with that team,” said Morgan. “They’re good guys, and I think they’ve made the right choice for them (moving their engine building in-house). I wish them the best.”

I told Morgan—who was wearing an AAP (Al-Anabi Performance) shirt and working with the Frank Manzo-led Pro Mod team—that he clearly landed on his feet. “I’ve been working with these guys for a while,” Larry informed me.

As for the Reed team, the story is that they all pitched in to build everything together. And there was a great family vibe there this weekend, with Joey and his dad Skip, Cecil Towner and his dad “Big Cec,” and of course Reed and the Whitely family.

Morgan’s son was helping out around the Flyin’ Ryan Oehler pit in Norwalk. You might say that Ryan was bit by a “National Dragster” cover jinx, as he had one of his worst outings in recent memory while fans walked around with his burnt orange EBR on the magazine in their hands. Oehler admitted to poor riding in qualifying, but after nailing an .008 on Pollacheck in E1, his bike just wasn’t in the game with a 7.002 at 194 mph.

Karen Stoffer didn’t exactly have her best weekend either after so racing so beautifully in Joliet. She qualified 11th, got beat beat at the tree .016 to .029 by Angelle, and was out in round 1.

Stoffer’s White Alligator Racing teammate John Hall fared somewhat better, qualifying 8th and making it to the second round before falling to Krawiec. Hall opened the weekend with a 6.92, ran four straight .90s, then bookended with a losing .92 against Eddie.

Hines’ day started with a first round win against Marc Ingwersen. “I got a request from Marc last night to come help them with their Motec M130 software—not necessarily to tune their motorcycle, but to see what they could do easier,” said Andrew. “Come to find out I raced them first round!” He needn’t have worried, as his 6.86 easily dusted Ingwerson’s 7.03 despite Marc’s .010 light.

Hines continues to praise the M130. “It’s allowed us to tune the bikes differently than we ever have, opening up to tuning each cylinder in each gear all the way down the track and to process it a thousand times faster than our other ECU we used. If you do the math, each piston only fires 500 times from starting line to finishline, so you’ve got to make every one count.”

Andrew’s round two pairing with Angelle was his first time racing her as a teammate. “After the history we’ve had in year’s past, it was no big deal racing her. Just like a qualifying round, it was fun! She had a good bike and I knew she’d made a good run. Her 60 foot was a little off because I put her over in the right lane and unfortunately she hit the cones down there. That was more my fault for not getting her axle set up right. She got caught in a groove down there and when she shut off it really shot over.

“Then I went against, I guess, my biggest nemesis Matt Smith. He’s got a really fast bike. It’s always a good battle when we race each other, you’re never really sure what’s gonna happen on the starting line. I think he tried to time his staging bulb to turn on exactly when mine did, but I was ready for it—ready for anything.

“I was able to get lane choice over Eddie. His bike had a tendency to spin all day long so putting him in the greasier lane was my chance.” Ironically, trying prevent a spin in the slick lane caused Krawiec’s bike to bog. “Other than turning the RPM down, we did everything to prevent a bog. So it’s perplexing why it did that. I’m gun-shy from Chicago where my bike smoked the tire like a Funny Car.”

Andrew said his team runs a proprietary clutch system. “It’s an RPM driven clutch that we’ve had for nearly 20 years now. Similar to an MTC but we built it in 1999.”

Hines says running Krawiec in the final never gets old, and they push each other each and every time. “We don’t get complacent, we look for what’s gonna make our motorcycles go faster and run a different tune-up from run to run. We try to find that next thousanth.”

Andrew also announced that all three Harleys will have different bodies when they run in Denver. “It’s gonna be absolutely new bodywork based off the FXDR, which is what we’ve been pushing around with all year. We started this process late last year, working with NHRA. It’s mainly just a push to go with the current brand that Harley-Davidson wants to push out here. So we’re gonna bring it out, hopefully it’s a little better. It’s all CAD designed.”