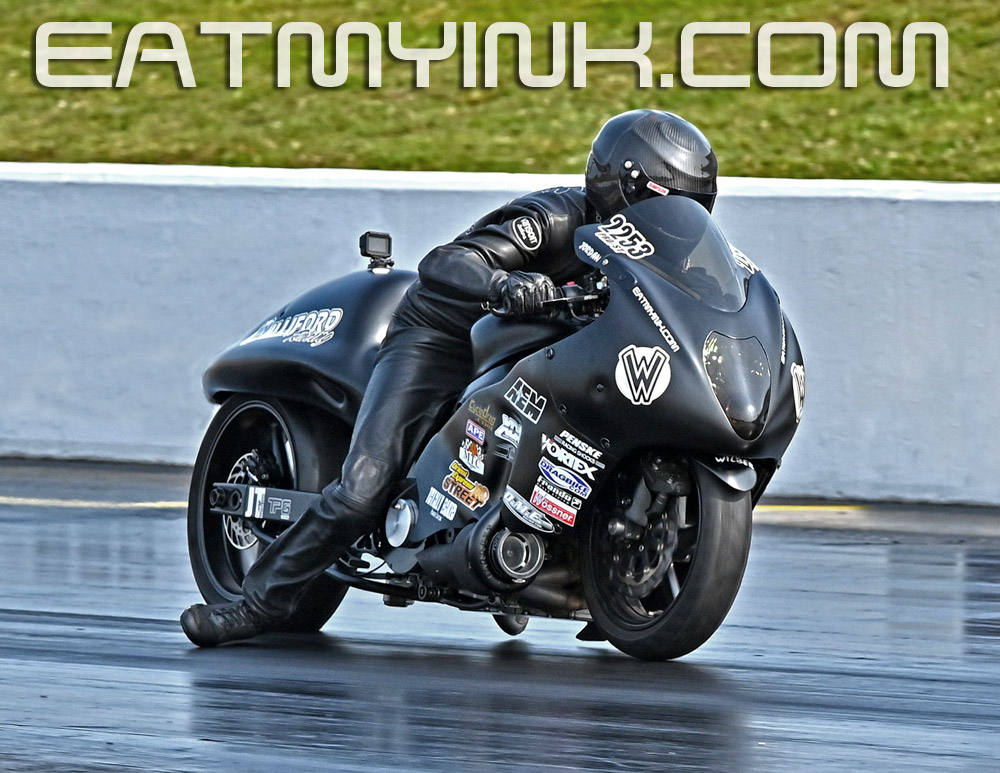 Orient Express Pro Street racer Jordan Haase saw his best performance of the 2018 XDA season as runner-up to teammate Rodney Williford at Virginia Motorsports Park. This year he stepped up another notch at VMP, beating #1 qualifier (6.538) Williford in the final round and set his personal ET with a 6.684. Both bikes are turbocharged Suzuki Hayabusas.

The .68 puts Haase in the top ten of the quickest racers of all time, and the win puts him second in points for the Pro Street championship. “It was pretty cool to win and lay down a killer ET that was smooth as glass in the same round,” said bike co-owner/tuner John Gover. “And like Frank, I did it my way.

“Jordan was ecstatic and I was happy to be able to give him the bike and tune-up to do it.”

“After lasts years performance at VMP and the recent rule change, I was excited and confident we could put together a good showing this weekend, I just didn’t expect to make it back to the finals to race Rodney again!” said Haase. “To be able to make it to the finals in consecutive races at VMP and do it against Rodney—who has been an idol of mine since his outlaw days—is truly special. He told me before the run to put my 6.6X pass on the board and I would have a good shot at the win. To be able win it while running a career best 6.68 was icing on the cake.

“We tested Friday with the new setup and the numbers were very promising. We even clicked off a personal best 6.736 with more power to play with, so we were definitely thinking positive heading into qualifying & eliminations. We made the most of the changes and were able qualify in the top half of the field.

“When it mattered most, John worked to give me the best bike he could to get past Nanu (Darian Payne), Ehren (Litten) and Chris (Connelly Jr.). None of the runs were easy by any means, but I was more comfortable on the bike than ever before and was able to ride out the little hiccups.

“It was definitely an emotional moment. I sat at the end of the track somewhat in shock, taking it all in. To be able to win in Pro Street was always a dream of mine. But to be able to give John a win and a bike that has gone 6.6X really means a lot to me. He is a numbers guy, I know that .68 probably meant more than the win, but I gave him both in one pass. He gave me a chance four years ago to ride his bike to see if I had what it took and to see if I really wanted to go down this route. After that year we agreed to build a bike together and start down this road, never looking back and always working to progress. Who would have thought that a few years later we would be celebrating and shedding tears together for making our goals a reality. My hope is that I can be an example for others who have hopes and dreams that may not seem possible to keep pushing, never give up, and always be the best person you can be.

“The support I have from my Williford Racing family is truly second to none! This win is dedicated to my father Dennis ‘Wilber, Haase. But it is also a win for every single person and company that has helped me through the years of my racing career. Big or small, each and every one of you has helped me get to this point. Each lap down the track has helped shape me into the racer and person I am today.”

Lightweight rider Haase faces the same battle that other riders his size face—hustling a shorter bike down track against the longer wheelbase allowed bigger riders. “With the 69″ wheelbase, the bike is very different,” said Gover. “Many people have said, ‘it’s just an inch, how much difference can it make?’ I tell them to ask their wife if she thinks an extra inch would matter!”

Big Man Anibal “The Cannibal” Merced hustled his AM Performance, nitrous-huffing Kawasaki ZX14 to DME Racing Real Street #1 qualifier with a 7.718 and took the final round win over Brad Stinnett.

“Been working on different motor combinations and this one is working great,” said Anibal. “With the new features on the Fueltech system and the new Penske triple adjust shock working great, getting a 1.29 60 foot. That’s what we was looking for! Happy with the result!

“Can’t say thanks enough to my crew, they are the best! Can’t feel any better qualifying #1, the Real Street winner, and the fastest Real Street pass of the weekend (a stunning 7.66 in the heat of the day). Congrats to Devin “Doe” Ragland going to the semifinals and thanks to Miguel Suarez for the help. We had some issues this past weekend with Jeremy Teasley’s GSXR1000 but we’ll be at MIR stronger.”

Connecticut HVAC man Bob “Killer” Carlson picked up two wins in Virginia—Mickey Thompson Tires Top Sportsman and MPS Racing Pro ET. Carlson ran a 8.43 on his 8.36 dial to take the win over a 8.32 on the 8.28 dial of Gary Clontz in the TS final.

Carlson took a fifth round Pro ET loss on his black ZX-14, but his win in Top Sportsman on his red ZX-14 gave him entry back into Pro ET for the sixth round. Bob went on to win two more rounds to face Shayne Proctor in the final.

Proctor had only entered one bike, but did take advantage of re-entry in round one after he took a loss with a -.003 redlight. Once back in the game, Shayne took the next six rounds to meet Carlson in the final. Proctor pushed the tree too hard and again turned on the redlight, giving Carlson a double-up win that earned him $6K on Sunday.

Carlson doubled at a VMP race last year as well, and this win will put him in the lead in Pro ET points.

The twelve racers that didn’t qualify in Pro Street raced in Pro Street B, with Quicktime’s Brad Christian taking the win over Mike “Kavos” Kovacevich.

story by Tim Hailey with info from XDA, photos by Terrence Belton