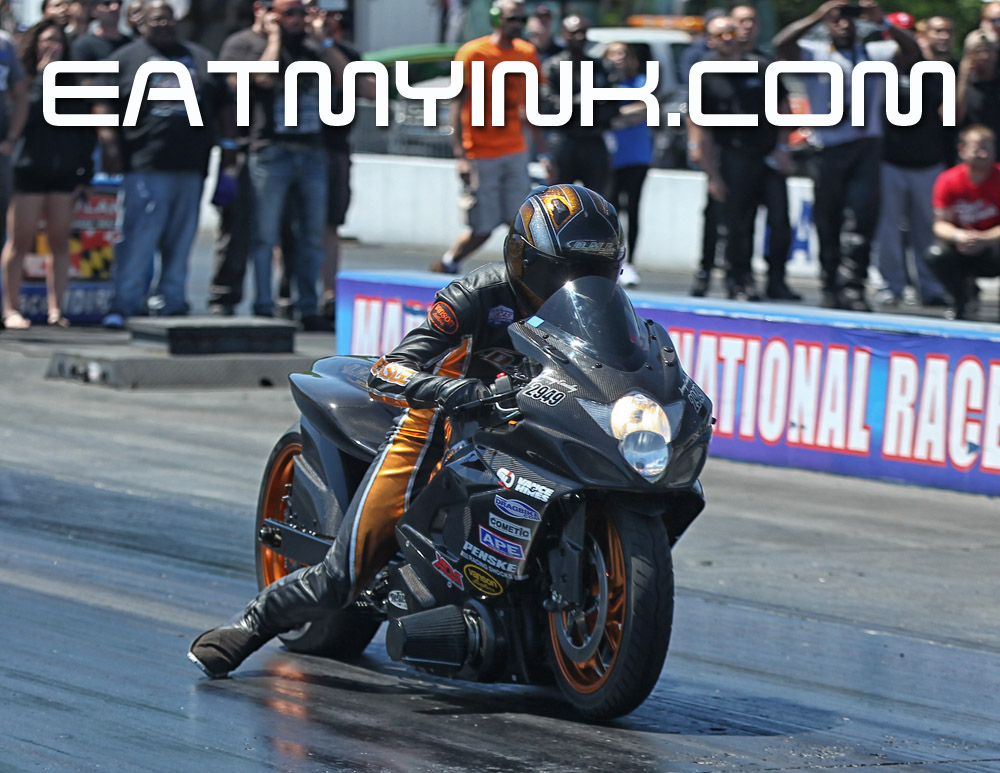 Orient Express Racing Pro Street records fell again this past weekend as hard work, exploiting the advantages of racing a 1000cc bike, new tires, and relatively recent rule changes continue to revolutionize the class—to the delight of some and the discouragement of others.

At the beginning of this season, riders and tuners were hoping to send their bikes into the 6.50s. It’s only June and the class saw a side-by-side, low-to-mid 6.40s final already at the Xtreme Dragbike Association (XDA) 2nd annual Superbike Showdown at Maryland International Raceway (MDIR) last weekend.

Big man Ehren Litten showed that ‘Busas are still in the game, at least with alcohol and a 1-2-3 autoshift. Ehren set a personal best with a 6.53 pass in round one of qualifying, then in round two took the top spot on the Pro Street G.O.A.T. list from Jeremy Teasley and the DME GSXR1000 when he ran a 6.48. Continuing to impress in Q3, Ehren destroyed the mile-per-hour record, hitting the traps at 232.59 mph to become the fastest Pro Street racer ever.

Litten capped off his perfect day with the Penske Racing Shocks Shootout win, laying down a 6.514 to Teasley’s 6.531 in the final.

Meanwhile, DME Racing tuner Andy Sawyer and EFI specialist Steve Nichols got to work to get Teasley’s 1000 back on top on Sunday. And in round two of eliminations, Teasley was successful with a 6.479 at 224.55 mph.

‘First to the Fifties’ Frankie Stotz, was lucky just to be racing on Sunday. Stotz showed up on Thursday not feeling well from a kidney stone he passed earlier in the week. Late Saturday night, he was taken to the hospital after suffering from unrelenting pain, in what would become a series of seven stones that would pass over the next few days. Despite the pain and discomfort, he pushed through the weekend.

Stotz and his Honda 1000 clicked off a new personal best 6.496 in the semifinal against Gaige Herrea, making him the third PST racer in the .40s.

On the other side of the ladder, Jeremy Teasley took out teammate Chris Connelly Jr, breaking the ET record and his personal best MPH with a 6.439 at 224.

So the two 1000s that just ran in the .40s were headed to the final. Stotz and Teasley both took off straight down the center of their lanes. The Honda had the initial edge over the Suzuki, but it only took two seconds for Teasley to catch him as they stayed side-by-side the rest of the way. Jeremy broke the record again, running a 6.422 at 222 to Stotz’s 6.464 at 217.88. Who would have imagined a 6.46 would be a losing number?

“It was rough,” said Stotz, talking more about his kidney stones than running 6.46 on a street tire and losing.

“I might not have out-run Jeremy, but I’d like to have had the opportunity,” said Litten. “But there’s a lot of racing left this season and I’m sure I’ll get another stab at it.”

And although we might be in a race to the .30s, Litten doesn’t see any improvements in the numbers laid down this weekend until the heat of summer turns to the cool of fall. “I’m pretty close to the edge (right now),” said Ehren. “It’s skating the tire on over half the pass.”

That might come as good news to those falling rapidly behind—and they are many. As news broke of the performances in Maryland, the head-shaking could be felt rippling across the internet—with discouragement matching amazement comment by comment. With a 6.92 now half a second off the front end of the field, we are witnessing a historic moment in the class.

story by Tim Hailey and XDA, photos by Kwame Olds and Terrence Belton