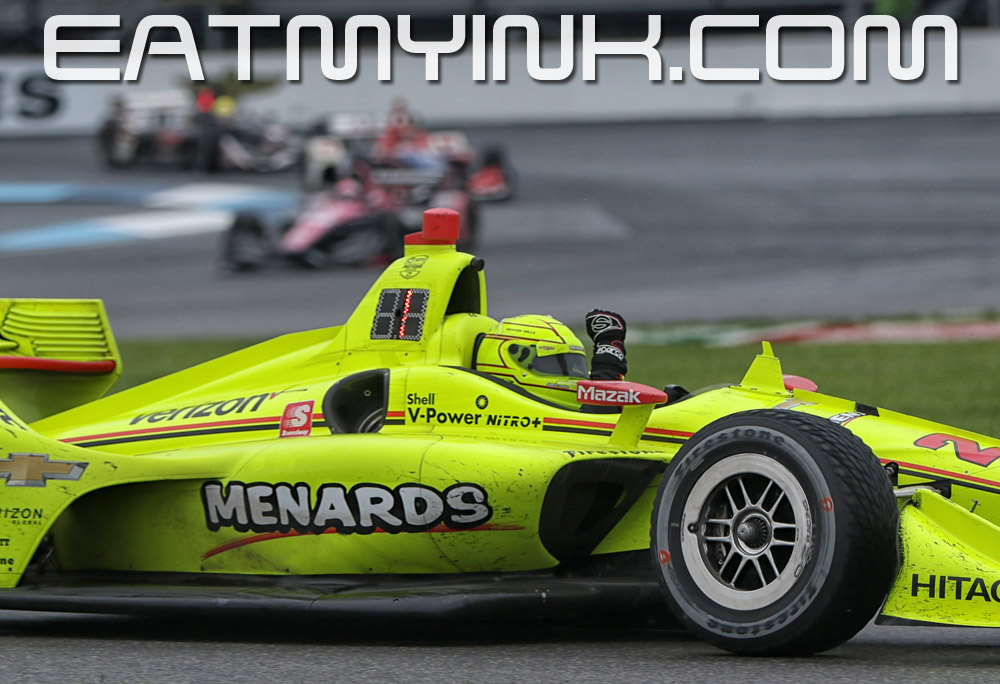 Simon Pagenaud mastered weather and the competition in his electric yellow Menards Chevy to win the IndyCar Grand Prix on a wet Indianapolis Motor Speedway road course. Pagenaud passed five-time NTT IndyCar Series champion Scott Dixon for the lead on the next-to-last lap  and pulled away to collect the 12th victory of his Indy car career and first in a 23-race span. Three of those wins have come in the IndyCar Grand Prix.

“What a way to start May!” said Pagenaud, who won by 2.0469 seconds. “The car was fantastic—awesome all day. We had something for everybody.”

Starting eighth in the 85-lap race that ran from start to finish in varying levels of rain, Pagenaud charged from sixth place in the final 18 laps in treacherous conditions to collect his first win since the 2017 season finale.

“I knew kind of from the get-go that I was going to be struggling with the front end, and I don’t know why it was balanced that way, but it just felt like I needed about six turns of front wing,” added Dixon, who none-the-less led a race-high 39 laps.

“It was tough,” Dixon said of the conditions beginning in a light rain that grew stronger as the day wore on. No team opted to change from Firestone’s dry-condition tires to the wets until past the halfway point.

With about a quarter of the race left, Helio Castroneves spun exiting the pits, stalling the car, and bringing out a full course caution that set up the final stint of the race with everyone on wets. Leading when the green came out, Dixon built a comfortable lead but was then visibly slow as he struggled with front grip. “I thought we could maybe hold the gap (over Pagenaud), but the harder I pushed, the worse it got.”

Making a charge, Pagenaud passed Matheus Leist of AJ Foyt Racing for third place with 10 laps to go and Meyer Shank Racing’s Jack Harvey for second position five laps later. It was Harvey’s first wet race of his career, and his tentativeness gave Dixon the cushion he enjoyed until Pagenaud got around. The 2016 NTT IndyCar Series champion Pagenaud—who has gobs of wet racing experience—then set his sights on Dixon.

When Dixon, the reigning series champion, slid a little wide exiting Turn 7 on the 2.439-mile, 14-turn circuit, Pagenaud dove his No. 22 Menards Team Penske Chevrolet inside Dixon’s No. 9 PNC Bank Chip Ganassi Racing Honda. The two cars made light side-to-side contact in the series of corners before Pagenaud exited Turn 9 in front.

“It was a matter of being in the right position,” Pagenaud said. “I pushed all race. When the rain came, I wasn’t sure it was going to work. Surprisingly, it was just the best out there. When Dixon was really struggling with his tires, you could see that.

“I was just braking as deep as I could to catch him. I wasn’t really planning on passing him there. He made a slight mistake.”

Dixon finished second in the race for the third straight year. It was also the reigning champion’s 43rd career runner-up result, ranking second only to the 56 of Mario Andretti.

“All in all, a solid effort,” said Dixon. “It was a tricky race. It sucks to obviously lead that many laps and come up short, but again, congrats to Simon. He drove a hell of a race and it’s nice to see him back in victory lane.”

Jack Harvey finished a career-best third in the No. 60 AutoNation/Sirius XM Honda for the Meyer Shank Racing with Arrow SPM team that’s scheduled to run 10 races this season as it builds toward a full-time NTT IndyCar Series program in the future. “I will remember this day for a long time,” said Harvey, who reached the podium for the first time in his 14th series race. “It was just so awesome that we finally got this podium. I feel like we’ve been right on the edge of having something like this for a while.

“Great race today in the wet and the dry. Hopefully, it’s just the first of many for this Meyer Shank Racing team….It’s such a great day for the whole team.”

“We didn’t know when to expect the rain, so we didn’t want to pit at the wrong time,” said Jones. “It wasn’t too bad when the rain was lighter as the cars on track help to dry it. The yellow at the end made it interesting, but everyone was already on the same strategy.

“It was quite a good weekend as it was the first solid race we’ve had this year. It feels good to have this result going into the Indy 500. Now we get to focus on the oval. I’m excited to see the red and white car on track.”

Power, the two-time defending race winner, placed seventh. “I don’t really know what our biggest issues were today,” said Power. “The strategy call the guys made was the right one to get us the track position that we lost. We were reasonable in the wet, but in the dry we just weren’t good, then I made a mistake. It was just a rough day, but great for Simon (Pagenaud).

“It’s funny that only me and Simon have won this race. He won again. I was stoked when I saw him win the race. Congrats to him, he really needed that. But it was a great day for us. I’m really happy with seventh considering how much we struggled in the dry.”

Marcus Ericsson brought out the race’s first caution with an unusual slap into the oval turn 1 wall. “We were struggling a bit to get close on the straights, so we were trying to get as close as possible through (Turn) 14, and I think I just got a bit too close and lost a bit of front downforce,” said Ericsson. “Understeer then snapped into oversteer and I just couldn’t catch it.”

Race winning rookie Colton Herta either spun or was spun on the restart after the Ericsson crash. As the field avoided the prone Herta, James Hinchcliffe punted Ryan Hunter-Reay, who then punched Herta.

“Such a rollercoaster of a day with getting that (drive-through) penalty, making our way back up to the top five and settling into a good strategy to keep us in the top 10, to making a mistake which lost us three positions on the last lap,” said Hinchcliffe, who wound up 16th. “I’m really frustrated with myself and for the Arrow guys. Our finish certainly doesn’t paint the best picture of what we could have done today. We have to swallow this one and move on, because next week is a whole other ball game. Happy for (teammate) Jack (Harvey) and those guys on their first podium.”

Points leader Josef Newgarden struggled to a 15th-place finish in the No. 2 Fitzgerald USA Team Penske Chevrolet but retains the points lead by six over Dixon after five of 17 races. Newgarden’s hands were visibly busier than most through the turn 2-3 complex. “When I came in I was screaming to stay on red (Firestone alternate) tires,” said Newgarden. “I really thought (the track) wasn’t ready yet, and I didn’t want to go to rain tires and that was probably a mistake. I should have said, ‘Go to rains.’ If we would have gone to rains, we would have been in the catbird seat still coming out first. Just a calamity of errors there at the end put a couple nails in our coffin.”

Rookie polesitter Felix Roseqvist wound up 8th after leading the opening 15 laps. “It was a tough race, with a lot of things happening,” said Roseqvist. “It was kind of bad timing on some things, we had some bad luck and we had some errors here and there. I think the main point for us was we were still having issues with degradation in the front on red (Firestone alternate) tires mainly. We just dropped massively and we had to go short on the second stint on reds. That just set us up badly for the rest of the race. I don’t know why it’s happening, but it’s something we are looking into. I feel like we should have been up in the front and somehow we couldn’t do that today.

“I did everything I could, but it didn’t work out in the No. 10 car. We came out toward the back on the wet tires, and I think we managed to get four or five guys in the end and ended up P8. It was a good salvage of points and we managed to recover a lot. At the end of the day, we can be happy with that, but overall I’m very disappointed and I felt like we gave away something, which was likely a podium today for the NTT DATA car.”

Just because you’re in the back of the pack doesn’t mean you can’t get racy. Max Chilton and Patricio O’Ward carried on a spirited battle for 18th place, with Chilton taking the spot from youngster O’Ward. “These types of races are always such a toss-up, and honestly, we were a few small calls away from having a very good day today,” said Chilton. “We had a pit stop issue at one point getting the (car) into gear, and a couple of little electrical issues we were trying to work through, but I know we were quicker than (Matheus) Leist all race and he came away with a fourth-place finish. It really was just one of those races that could’ve gone either way and unfortunately it didn’t go our way today.”

“This has just been a really tough weekend,” said O’Ward. “We had issues yesterday and again this morning, but I feel like we ultimately ran a really good race up until the rain started coming down. We made a mistake on (which) tire to be on and it was like driving on ice. We lost all of the track position that we had made up during the race coming up from 19th to consistently run in the top five. Considering where we started and a mishap on the start, we had made up a ton of ground. Regardless of how the race ended, I think we should be very pleased with how we ran and our overall pace. In the end, we just made a mistake.”

NTT IndyCar Series teams are busy the next two days preparing superspeedway cars for the opening of Indianapolis 500 presented by Gainbridge practice on the Indianapolis Motor Speedway oval on Tuesday. Qualifying for the 103rd running of “The Greatest Spectacle in Racing” takes place May 18 and 19.

Story by IndyCar with edits and additional content by Tim Hailey

Photos by Hailey and Alexander Tutt