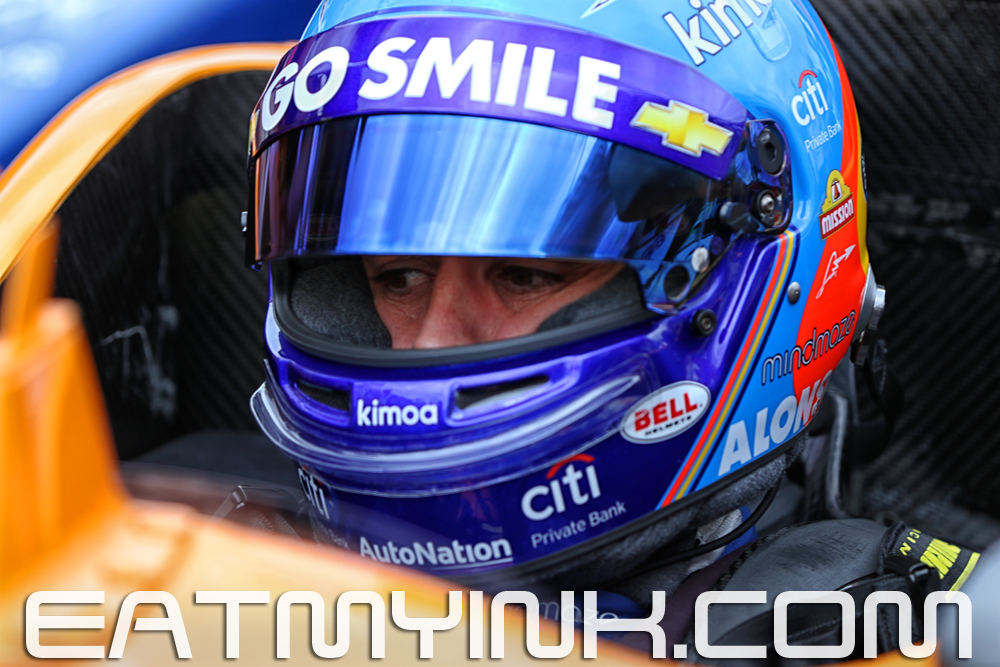 I’m sure you’ve seen this somewhere before, but we’ll talk a lot more about it here: two-time Formula 1 world champion Fernando Alonso and Team McLaren will not race in the 2019 Indy 500 after failing to qualify. Returning to the 500 for a second time in a bid to win the last leg of racing’s so-called Triple Crown (Monaco, Le Mans, Indy), Alonso was knocked from the field when Kyle Kaiser posted a four-lap qualifying run 0.019 of a mph faster.

Six drivers vied for the last three positions in the field. Sage Karam, James Hinchcliffe and Kaiser drove their way into the field with the best qualifying efforts in the Last Row Shootout, with Alonso among those whose runs came up short on speed.

Alonso, the third to try, completed his run at 227.353 mph in the No. 66 McLaren Racing Chevrolet. It placed the Spaniard second to Hinchcliffe at the time.

Karam qualified at 227.740 mph in the No. 24 DRR WIX Filters Chevrolet, dropping Alonso onto the bubble as the 33rd qualifier. In a backup car cobbled together by his Juncos Racing crew after Kaiser crashed the primary No. 32 Chevrolet in Friday practice, Kaiser ran four laps at 227.372 mph to take the last spot away from Alonso.

In fact, Kaiser and Alonso both destroyed cars in the days before qualifying, but the scrappy, low-budget Juncos team outperformed international commercial juggernaut McLaren in getting back on track and up to speed. While McLaren waited on their Dallara to be painted the proper shade of papaya orange, Juncos—whose car was crashed on the very day before qualifying—put a bondoed car on track and in the field.

Kaiser’s crash occurred when the team apparently found the limit to how far they could trim the car:

Alonso’s crash occurred when the car apparently lost front downforce in the wake of another car:

Kaiser called the days since his crash “the most emotional 48 hours of my life.”

“I don’t think I can wrap my mind around what we just did,” Kaiser said after qualifying for his second 500 under the most intense pressure. “Like I keep saying, all the credit to the team. They’ve been working nonstop trying to get this car ready for us and they did everything we needed to get us in this field. I’m so proud of them, so proud of everybody that helped make this happen.”

You can read about how the Juncos IndyCar team and it’s team members from other series partnered together to finish the job in this Marshall Pruett article on Racer.

By contrast, McLaren’s path to getting a car on track has been a disaster of bad planning from Day 1, and even earlier. You could say it all started when the McLaren F1 team ditched Honda for Renault—just as Honda was reaching parity with the French manufacturer. It was a classic bad poker move, and Red Bull was ready to bet on Honda at the right time

How does this affect McLaren’s Indy 500 program? When McLaren was at Indy with Alonso in 2017, the team partnered with Andretti Autosport, with the very experienced and successful Andretti team doing much of the heavy lifting. Andretti Autosport is a Honda team.

After being ditched by McLaren in F1, Honda apparently wasn’t interested in an Indy relationship with the orange cars. Even though McLaren was running “it’s own” Indy team this time around, that left Chevy and Chevy teams for McLaren to form any kind of partnership. Strangely, they chose second year IndyCar team Carlin for that. You can read more about that partnership in this Indy Star article.

Including Alonso’s, Carlin brought four cars to the Speedway. Three of them didn’t qualify.

On the opposite end of the Chevy success spectrum sits Ed Carpenter Racing (ECR), which very nearly put all three of its cars on the front row. A source inside ECR tells me that McLaren could have partnered with them instead of Carlin, and even tried to buy an ECR car on Saturday night of qualifying weekend. Here’s Carpenter talking about that and more:

“Obviously, it would be nice to be in the race next Sunday,” Alonso said. “We came here to race and to challenge ourselves, and we were not quick enough. I congratulate all the other guys that did a better job, and hopefully we’ll see a nice show next Sunday.

“We are all disappointed, and we will try to do better next time. But it’s that kind of things that you learn. I said before, I prefer to be here—even 34th—than being at home like last year.”

Here’s an incredible account of McLaren’s Zak Brown telling every detail of his team’s failures.

Kaiser was still feeling the afterglow on Thursday. “Definitely. It was a great effort by everyone,” said Kaiser. “I know I have to keep my emotions in check over the weekend, but I want to go race now.
“It felt like we qualified on pole when I came in, to be honest. It was pretty wild. I didn’t really know right away. Everybody keeps asking, when did you know. I had no idea. I had somewhat of an idea because I got to see the laps, but I heard it was really close. And I came across start-finish and first thing I asked was are we in, did we make it, and I just heard screaming, so that was a good sign. The last few days have been an absolute whirlwind. It’s been crazy.

“I have to give the team pretty much all the credit. After the incident on track, they had 40 straight hours of work trying to get that car together, getting us ready to practice the next day at 8 a.m., just an unbelievable effort. It was just an amazing battle from their end, just looking for every little thing we could do, no matter what it was. It really paid off.”

The 103rd Running of the Indianapolis 500 airs live at 11 a.m. Sunday, May 26 on NBC and the Advance Auto Parts INDYCAR Radio Network.

story, photos and interview video by Tim Hailey with additional material from IndyCar