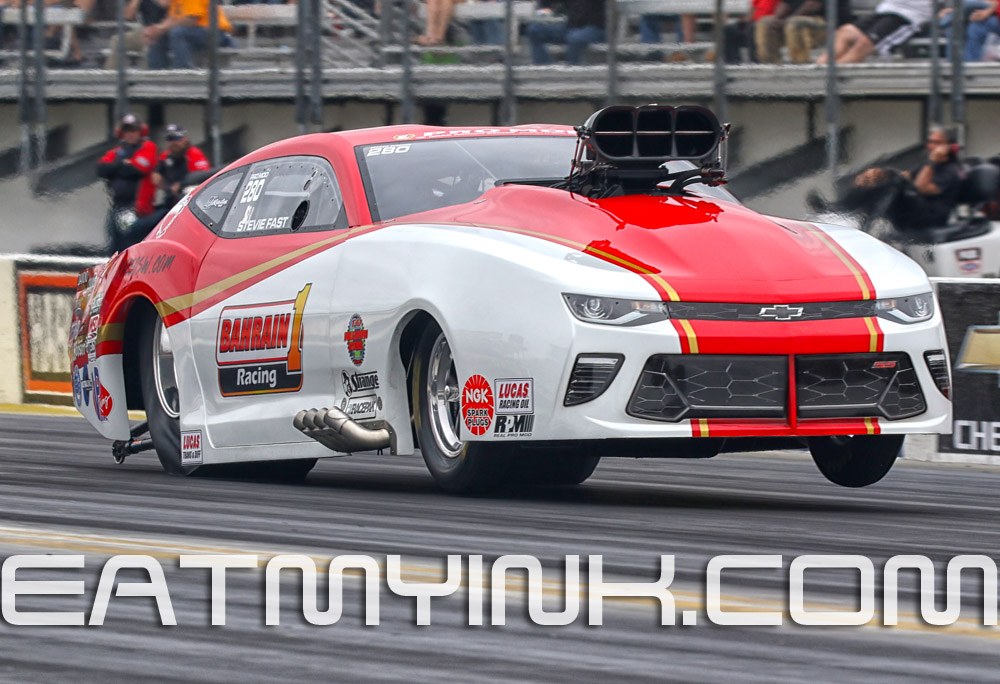 Considering he has two final rounds appearances, a world record, one victory and the points lead, it couldn’t be a much better start to the 2019 E3 Spark Plugs NHRA Pro Mod Drag Racing Series presented by J&A Service season for Stevie “Fast” Jackson.

But heading to zMAX Dragway as part of this weekend’s 10th annual NGK Spark Plugs NHRA Four-Wide Nationals, there is redemption on Jackson’s mind. The fan-favorite and Pro Mod standout crashed in the final round of the race a year ago, and returning to the site of that unfortunate incident is clearly on his mind as Jackson heads to Charlotte this weekend.

“That’s a big ole’ dragon I have to go slay,” said Jackson, who has six career wins. “Lining up in that far right lane and taking that thing down through there, I’m not going to lie to you, I’m nervous about it. We’ve never particularly done well in Charlotte. It seems like there’s always something there taking the icing off my cake. I want that race. We’re fast enough to win that race. The driving style you need to win a four-wide (race) favors me. It’s an outside-the-box, grudge race-type mentality. I anticipate doing well there and I’m going there to win that race.”

The race, which is presented by SMP Racing, is the third of 12 events during the 2019 E3 Spark Plugs NHRA Pro Mod Drag Racing Series season and will be shown on Fox Sports 1 (FS1) and Fox Sports 2 (FS2). Jose Gonzalez is the defending winner of the event, but Jackson was right with Gonzalez until he got loose on the top end a year ago.

Since then, Jackson has debuted a new supercharger-powered Bahrain 1 Racing Camaro this year, made the quickest run in the history of the class (5.643) in Gainesville and won the most recent event in Houston. It gave him a slim three-point lead against Todd Tutterow, who topped Jackson in the final round at Gainesville, while the duo has opened up an impressive lead over the rest of the talented field. But a quick start is all part of the plan for Jackson, who made his NHRA Pro Mod debut in 2017 and has championship aspirations in 2019.

“My goal is to win 20 rounds (in 2019),” Jackson said. “I think 18 will win a title. If you go two rounds per race, you’re definitely winning a title. That’s our goal and that leaves you room to drop the ball at one or two races. I feel like everyone, including us, is very likely to DNQ one of these races. There will be very few teams to qualify at all 12 races, including us. We DNQ’d twice last year and if you get behind the eight-ball you’re done. (But) I absolutely have a roadmap.”

It’s a tough road to navigate considering the immense talent in the class. The list includes the likes of defending world champion Mike Janis, three-time world champ Rickie Smith, Chad Green, Jeremy Ray and Michael Biehle, with more than 25 standout drivers competing in Charlotte. Add in the unique aspect of four-wide drag racing and it makes for another thrilling weekend for the class. Jackson appreciates the different talents in the class, as well as the different power adders (supercharger, nitrous and turbo) that make for plenty of exciting storylines.

“It’s cool that there are races that kind of favor each combination, but if you don’t get it done with a supercharged car early, you’re going to struggle down the stretch,” Jackson said. “There’s races for each combination that are beneficial for sure. It showcases the tuners, as well as the drivers. The thing I love about NHRA Pro Mod is you’re not going to be dominant for very long. This class is as hard as it gets and it’s exciting. To come out and do as well as we have is amazing. Coming out swinging is an awesome momentum-builder for our team.”

SMP Racing is Russia’s premier motorsports development program, featuring a variety of racers who compete in some of the largest racing series across the world.

The first of four E3 Spark Plugs NHRA Pro Mod Drag Racing Series presented by J&A Service qualifying sessions takes place at 4:00 p.m. and 7:00 p.m. on Friday, and the final two rounds of qualifying take place on Saturday at 1:30 p.m. and 3:55 p.m. The first round of Pro Mod eliminations are scheduled for 12:40 p.m. on Sunday.