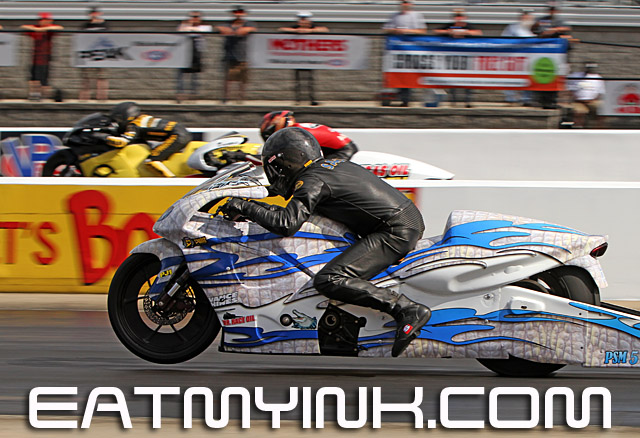 Jerry Savoie isn’t sure how many events he will race during the 2019 NHRA Mello Yello Drag Racing Series season. But there are two definite locations on his list and two races he isn’t going to miss. The first was the four-wide race in Las Vegas, while the second is this weekend’s 10th annual NGK Spark Plugs NHRA Four-Wide Nationals at zMAX Dragway.

The Pro Stock Motorcycle veteran has thoroughly enjoyed the unique races at the pair of Bruton Smith-owned tracks, and the 2016 world champion enters this weekend as the defending event winner of the Charlotte race. Looking to get his season on track on his White Alligator Racing Suzuki, a trip to the Bellagio of dragstrips for the biggest spectacle in drag racing might do the trick.
“Vegas and Charlotte are the two best tracks in the country,” Savoie said. “The preparation of the tracks, the shutdown areas, there should be no stress for anybody. This track, it’s the best of the best and it’s a total package as a racer.
For me, I like the four-wide. It’s a chance to see the best of the best actually screw up. I think it’s pretty neat and it just comes down to mental preparation. If you’re mentally prepared for this race, you’ve got a good shot at winning.”

Steve Torrence (Top Fuel), Cruz Pedregon (Funny Car), and Savoie (Pro Stock Motorcycle) were last year’s winners. The race will be televised on FOX Sports 1, including a broadcast of the finals on Sunday, April 28 at 6:00 p.m. (ET). It is the third of 16 events during the 2019 Pro Stock Motorcycle season for Savoie, who is seeking his 10th career victory in the class at the 10th anniversary one of the most unique experiences in motorsports.
Savoie enjoys the sometimes-chaotic pace on the starting line during this weekend, staying focused on an approach that has worked well for him over the years at zMAX Dragway. With a pair of quarterfinal appearances in 2019, Savoie, who is currently fifth in the points standings, is looking to take the next step this year. The team, led by standout tuner Tim Kulungian, has been searching diligently for more power and Savoie hopes that work starts to pay off in Charlotte.
“We’re still having some problems, but the guys are working hard and we’ll get it straight,” Savoie said. “We’re down on power, but when we find it, everybody will know. It’s just evolution. We’ll figure it out. If you qualified No. 1 every time and won every race, it’s basically not a challenge, so when you fall behind and then catch up, it’s pretty rewarding.”
It also adds a great deal of joy when that work leads to a trip to the winner’s circle. That’s the goal this weekend in Charlotte for Savoie, but he’ll have to get past a talented group of riders that includes points leader Andrew Hines, who won in Gainesville, Vegas winner Hector Arana Jr., Eddie Krawiec, defending world champion Matt Smith and Joey Gladstone. Savoie hasn’t been able to match the class frontrunners so far this year, but he remains confident that will come.

“I say give it a couple more races and we should have it figured out,” Savoie said. “Tim has been working his butt off and everyone is working hard. I think we have what it takes to do it. I believe that strongly or I wouldn’t have come out this year. It’s just a matter of putting the parts and pieces together, but Tim is definitely one of the best crew chiefs in the industry. We’ll get it figured out.”
Defending Top Fuel world champion Steve Torrence will look for his first win of 2019 against the likes of points leader Doug Kalitta, 2017 world champ Brittany Force, who won in Houston, Gainesville winner Richie Crampton, Leah Pritchett, Clay Millican and Antron Brown.

Cruz Pedregon snapped a long winless streak a year ago in Funny Car when he won in Charlotte, and he’ll look for his first win of 2019 against the likes of defending world champ J.R. Todd, points leader Robert Hight, who has three wins this year, and Phoenix winner Matt Hagan.
The E3 Spark Plugs NHRA Pro Mod Drag Racing Series presented by J&A Service makes the third of 12 stops in 2019 with its appearance at zMAX Dragway. Jose Gonzalez grabbed his first career win in the popular class last year at the event, while Todd Tutterow and Stevie “Fast” Jackson have claimed the first two wins of 2019. Fan favorites Erica Enders and Alex Laughlin will be competing in this exciting category as well.
The ultra-competitive SAMTech.edu NHRA Factory Stock Showdown will hit the track for its second appearance of the season. This growing series features production car drag racing at its best. Fans of modern muscle cars will love these quick and unpredictable machines that represent the ultimate in technology and performance.
Back by popular demand, the exciting Mountain Motor Pro Stock class will make its four-wide racing debut in Charlotte this year. With dynamic paint schemes and throwback hood scoops, Mountain Motor Pro Stock cars bring maximum entertainment value when they hit the track, making the second of four appearances in 2019. The event also features thrilling competition in the NHRA Lucas Oil Drag Racing Series, showcasing the future stars of the sport.

The second round of qualifying on Friday night will be a special treat for as the NGK Spark Plugs NHRA Four-Wide Nationals go Prime Time! With pyrotechnics, a live DJ, driver intro music and header flames under the lights, this will be an unforgettable experience for race fans.
As always, fans can interact with their favorite drivers as they’re granted an exclusive pit pass to the most powerful and sensory-filled motorsports attraction on the planet. This unique opportunity gives fans direct access to the teams, allowing them to see firsthand the highly-skilled mechanics service their hot rods between rounds, and get autographs from their favorite NHRA drivers.

Fans also will want to visit NHRA’s popular Nitro Alley and Manufacturers Midway, where sponsors and race vendors create a carnival atmosphere, with interactive displays, simulated competitions, merchandise, food and fun for the entire family.
Mello Yello Drag Racing Series qualifying will feature two rounds at 4:30 and 7:30 p.m. on Friday, April 26 and the final two rounds of qualifying on Saturday, April 27, at 2:00 and 4:15 p.m. Final eliminations are scheduled for 12 p.m. on Sunday, April 28.
story by NHRA, photos by Tim Hailey