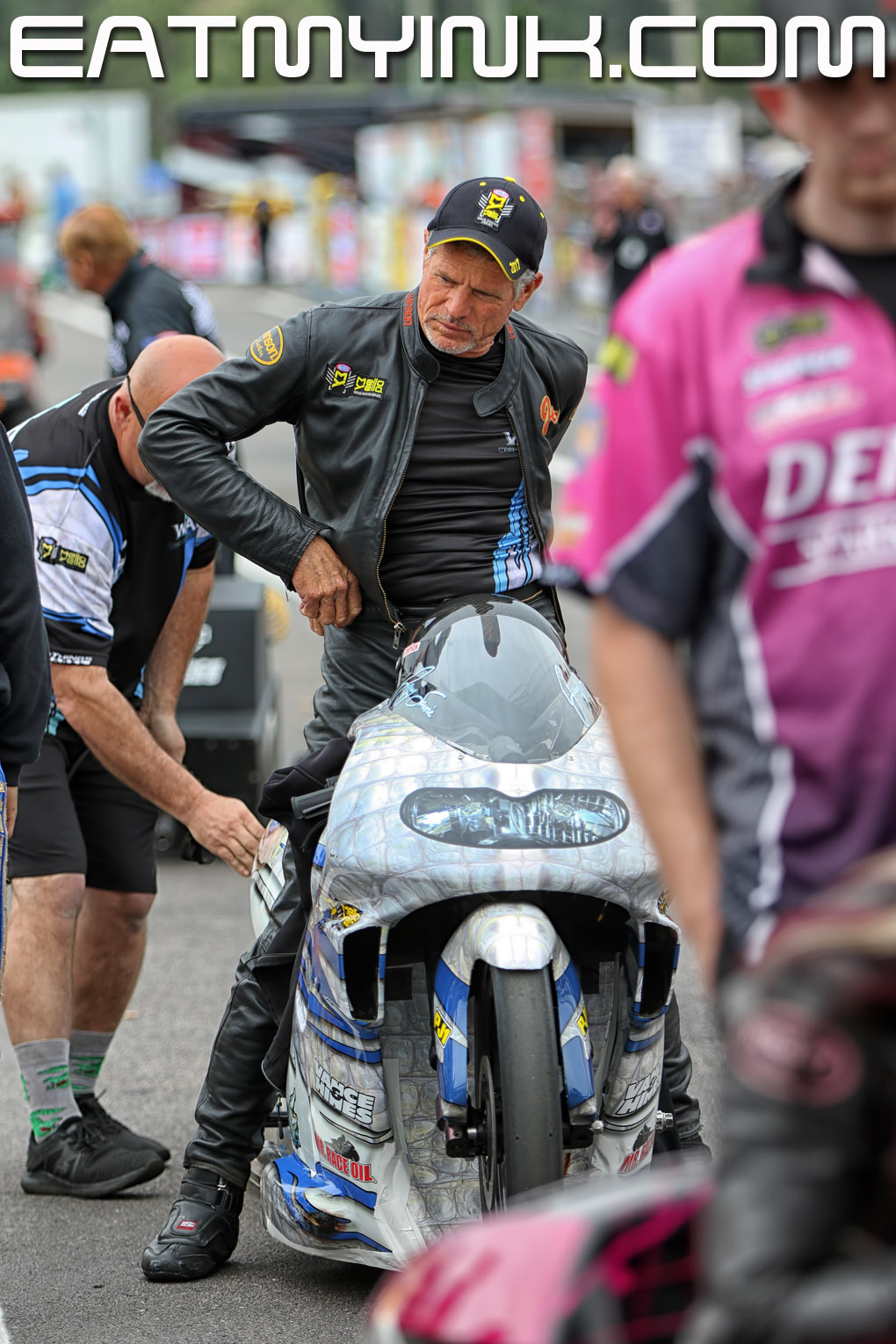 “I’ve always been a straight shooter, and nobody can call me a liar, a crier, or a whiny little brat,” said Jerry Savoie, who then elaborated on what he thought about NHRA adding 15 pounds to the Pro Stock Motorcycle V-Twins. “I think, and I believe, that you don’t slow a class down to let the bottom ones pick up. You bring the bottom up.

“Matt Smith has worked his ass off, him and Angie both, to make power and you’ve got to give’em credit. The ‘Red Rocket’ is definitely a red rocket, no doubt.”

“Last year, when you race Pro Stock Motorcycle and get passed in the last 2-300 feet of the track, it’s pretty tough,” said Savoie’s tuner Tim Kulungian. “Matt would literally drive around us like that.”

But Savoie and Kulungian want something to happen, as they see their Suzuki GS platform falling behind.

The NHRA has been down the “Suzuki Problem” road before—a matured platform based on a stock motor long since out of production. Suzuki and Don Schumacher Racing worked with McLaren, for some reason, to produce a 4-valve, billet jewel with cassette transmission. The very threat of this motor caused Vance & Hines/Harley-Davidson to sneak their own 4-valve V-Twin heads into the rulebook under the cover of darkness.

Turns out that the drag racing rookies at McLaren produced a jewel that was some 50 horsepower shy of competitive.

Talk at the Gators this year turned towards the idea of Vance & Hines producing such a motor, only better. “We need billet cases and a new crank, and need to be closer to their cubic inches,” GT Tonglet said online. “Last year we had to run 1.03s (60 foot times) to run close to Matt and V&H (Harleys) when they were going 1.08s.”

“To build a (new) engine is about 750 grand,” said Savoie. “Terry (Vance) is like ‘Jerry, show me the business model. That’s 750,000 minimum, and if we build it, how many do we have to sell to get our money back? I’ll never recoup my money. And I don’t own Vance & Hines anymore, so the equity investors will say ‘Show me the money.’’ The business model of that just doesn’t work.”

Actually, 750 large doesn’t sound so bad to me. By the time you’ve bought a new Gen2 motor from S&S and had it massaged to Matt Smith competitiveness, you’re talking $75,000. So that’s the going rate if you want to be the champ, and I could see breaking even on such a Suzuki motor—which should have uses outside of PSM, bigger volume, and thus lower costs—in as little as two years. But what do I know about business? The Suzuki field has hopes of keeping motors in the $40-50,000 range.

Some stop-gap measures short of a whole new motor are being considered, according to Savoie. “We are in talks for a 4 valve cylinder head,” continued Jerry. “After the weekend (in Gainesville) turned out the way it did, NHRA said ‘We’ll consider a 4-valve head,’ and they mentioned George’s head.”

George Bryce and Mitch Brown produced the MonStar 4-valve head several years ago, which was denied approval by NHRA, supposedly for flowing too much power (the head has been approved in some Europeans series). Brad Mummert has a MonStar on the nitrous GS Pro Street bike that’s knocking on the 6.50 door.

“But that (head) has problems for Pro Stock,” argued Savoie. “You can’t run a big enough cam. The reason for that is, the head is so short from top to bottom that the buckets gonna hit the top of the head.”

Kulungian echoed Savoie’s assessment, but was not interested in going on record about a head he’s never laid hands on, seen drawings of, or gotten specs from the source.

“A two valve takes a much larger cam lobe than a four valve,” said Brown. “It’s the same for every 4-valve engine, and one of the reasons no one makes a 2-valve engine anymore.”

“What he’s saying is true,” agrees Kulungian. “A 4 valve cylinder head won’t need the lift that a 2 valve requires.”

Blake Gann was asked by NHRA many years ago to produce a billet 2-valve head, had their blessing every step of the way as they solved problems they saw in the V&H and Ward Performance heads, right up until the completed bead was delivered and was promptly denied approval.

“We had their approval until we were finished and the engine was running,” remembers Gann. “About two and half weeks before the Gatornationals—we were gonna run that engine in that race—the phone rang. Out of the blue they said ‘Hey, how’s that head?’

NHRA’s Don Taylor seemed a little conflicted about the process at the time and told Gann at Gainesville (where—deja vu—the Suzukis were running slow) to have a working engine in Atlanta and they’d reconsider it. “They asked if anyone else had ordered one, and I said ‘Yes, Wesley Wells, Paul Gast, and Mike Berry (note that all three have since left the class, Berry after switching to a Buell) all ordered one.’

But Taylor already had a letter of disapproval in his hand when he went to Gann’s trailer to observe the motors in Atlanta. “He handed me the letter and I thought ‘Good deal! I’ve got a head approved!’ He started walkin’ down the steps as soon as he handed me the letter. I guess he thought we was gonna kill him or something.

“That’s how gullible I am,” said Gann, who realized when he read the letter he’d been hoodwinked again. “I bit that hook twice and there wasn’t even a worm on it.”

“I kept that letter duct taped to my trailer right next to my computer for years, and every time (current tech director) Bob Blackwell and anybody from NHRA came on my trailer, they could see the letter.”

The letter’s stated reason was that the head wasn’t cost effective, but Gann was only charging $15,000 for the complete unit. “I was making no money off of it,” Gann claims. “I just wanted to get the heads out there and run it myself.”

At the time, Gann was caught between the warring titans of V&H and DSR (who still hoped their McLaren Suzuki would be all that), so he’s unsure where to cast the blame for his project getting killed. But we can safely assume that “cost effectiveness” for the racer was never the real reason. Gann switched to a Buell a short time later.

Gann’s heads have since been used on the record-setting Pro Mods of Eric McKinney and Charlie Prophit, showing there is a market for billet Pro Stock components outside of Pro Stock. And he has more available, in both finished and in roughed out form.

Gann is not very familiar with the Monster head, and I do find it amazing that these important players never gotten their hands on these heads and have to talk about them in the abstract. But Gann thinks 4 valves aren’t as good as 2. “More than one rooster in the hen house is too many. One valve, one port.”

“It’s a very unique engine,” said Kulungian. “Pro Stock Motorcycle piston speeds are faster than Formula 1. Do the math. We’re dealing with port velocities that are like no other motorsport.

“Whether a 2 valve or 4 valve head is better on a Pro Stock Motorcycle engine, we can only hypothesize, because no one has done one (at current 2 valve displacement limits). So we really don’t know. That’s the real answer.

“With a 4-valve, we have models we can look at for a place to start (on cam profiles), but sometimes models aren’t right and we really don’t know because we haven’t done it yet. That’s the bottom line.

“And I think Vance & Hines is the company that makes the most sense to do it, because they have the most experience in this area.”

Truly they probably do, but this is an opportunity to open up the space to other developers, component manufacturers, and engine builders to create sorely missing competition in the Suzuki PSM field.

V&H became the only competitive Suzuki PSM supplier because they made a better product at a better price. And maybe they would win out again—that’s business, that’s racing, that’s America.

Something that Kulungian, Tonglet and Gann do know is that the whole point is to make Suzukis faster. “And hopefully a little more reliable,” said Gann. “The things are terrible now. It’s an eggshell, there’s nothing left of it.”

Matt Smith has found the money and relationships to create a competitive edge, and even Kulungian agrees “At the end of the day, this is not club racing.”

Part 5 will focus on the S&S field.