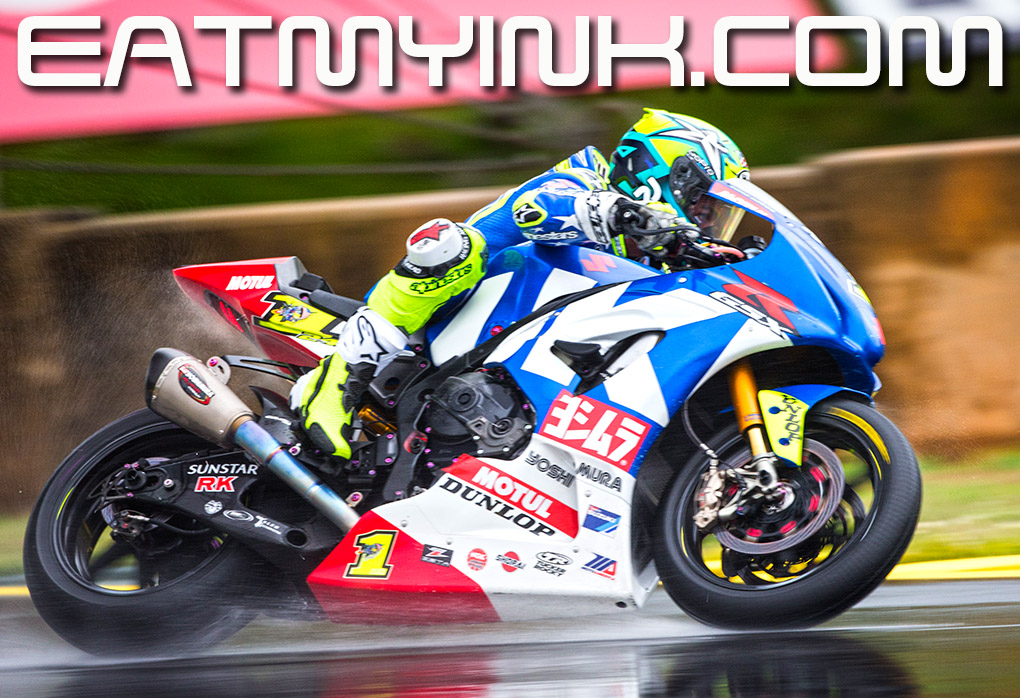 As the North American motorcycle road racing season gets fired up next weekend in Daytona, Eatmyink takes a sharp look at 2018 through the words of Michael Marino and lens of Michael Brock.

Sometimes someone wins in a season opener and gets out to an early championship lead, only to watch their performance fade as the season goes on. In the MotoAmerica series, the last three season openers have been dominated by the same rider.

MotoGP winner and castaway Toni Elias, who made his MotoAmerica debut in the 2016 season opener at Austin, Texas’ Circuit of the Americas, won both races that weekend. Despite racing at many tracks he had never seen before, Elias was a contender for the 2016 MotoAmerica Superbike title, finishing third in the standings and just one point off of four-time champion Josh Hayes.

In 2017, Toni Elias again swept the season-opening MotoAmerica races at Circuit of the Americas. With a year of experience under his belt, Elias was able to cruise to his first MotoAmerica championship.

For 2018, a lot of things had changed. The MotoAmerica season-opening round moved to Braselton, Ga.’s Road Atlanta, and Elias and the rest of MotoAmerica’s Superbike class competitors would have to race in the rain Sunday. Amazingly, the rider standing on the top step of the podium in both races didn’t vary from the previous two seasons.

The weekend’s on-track action got off to a great start. Cool-to-warm temperatures and mostly sunny skies set the tone for the first two days of the event.

Saturday’s Superpole session saw the weekend’s first big surprise for Scholtz. The non-factory rider from Durbin, South Africa put his privateer Yamaha YZF-R1 on pole. The two-time superbike champion Beaubier and Elias slotted in behind Scholtz to round out the front row for Saturday afternoon’s race.

Race 1 saw Elias’ streak of opening-round wins continue, as the Suzuki rider finished over 5 seconds ahead of Scholtz and Gerloff in dry conditions. Notable retirements included Genuine Broaster Honda’s Cam Peterson and Yoshimura Suzuki Factory Racing’s Roger Hayden. Beaubier also had a crash early in the race at turn 10A but remounted to finish in ninth-place.

The rain began to taper off as the race went on, but there was no tapering off for Elias. The Suzuki rider took his second win on the weekend, and sixth-consecutive opening weekend win by 1.639 seconds over Beaubier.

Scholtz rounded out the podium with an amazing ride. He was forced to run wide on lap 1, turn 1 to avoid being taken out by M4 ECSTAR Suzuki’s Jake Lewis. Dropping down to 10th-place and last in the running order, Scholtz rode to a podium finish despite the treacherous track conditions.

Attack Performance Herrin Compound rider Josh Herrin had a most unusual weekend. His team’s transporter broke down with a reported blown differential in Louisiana. The team was determined to make sure Herrin and the team’s newest rider, Liqui Moly Junior Cup rider Gavin Anthony, could compete at Road Atlanta.

For Anthony, the team rented a pick-up truck and had its rig driver drive all night Friday to Road Atlanta with Anthony’s Graves-prepped Yamaha YZF-R3 in the bed.

Herrin, who is a Georgia native and lives within 300 miles of Road Atlanta, went to even greater lengths to get on-track. Herrin went home and got his street bike, a Yamaha YZF-R1S, and the team members who made it to the track went to work on an overnight superbike conversion. Herrin ended up racing both Saturday and Sunday and finished inside the top 10 in both races.

Some racing weekends are a challenge from the time a team sets up in the paddock. For the Weir Everywhere Racing BMW team, MotoAmerica’s Road America race was one of those weekends. The team had to work hard to find the right set-up throughout practice and qualifying only to have its race cut short.

The team’s weekend of ups and downs started in Saturday afternoon’s Stock 1000 Class qualifying session. Team rider Travis Wyman managed to put the team’s BMW S 1000 RR on provisional pole despite struggling with the bike’s set-up most of the session. Sunday morning’s second qualifying session of the weekend saw more of the same. While no rider was getting close to beating Wyman’s best lap time from Saturday, Wyman found himself only third-fastest for most of the session as the team continued getting the bike set up for Road America’s long straights and iconic corners. Wyman ended the session on a high note, beating his fastest lap from Saturday and securing the team’s third pole of the season.

In Sunday afternoon’s race, Wyman got his best start of the season, only to miss a shift heading down Road America’s long front straight toward Turn 1. Even with dropping down to fifth place Wyman had raced his BMW to first place by the end of Lap 3. On Lap 4, Wyman was trying to put a gap between himself and the other frontrunners and outbraked himself as he entered Turn 12. Wyman consequently crashed and was unable to remount his damaged bike.

“We struggled a bit in qualifying this weekend but in the end found a set-up that was really working for me,” said Wyman. “I was a bit surprised by the pace of the other frontrunners in the Stock 1000 Class, but I learned where I was stronger than them on the track.

“In the race I got a good launch but had a problem with an upshift and had to make a few moves to get back to the front. I was trying to pull a gap on the rest of the field when I lost traction on the front heading into Turn 12 and low-sided. I wanted to get going again to salvage some points but the left clip-on bar was too damaged to continue.

“We as a team will work during the long break to get the bike ready for Utah Motorsports Campus. I think our BMW S 1000 RR package will be strong there. I wish we had more track time with the bike, as every race weekend continues to be a learning experience. I have a lot of confidence in my team though and believe we will be back in the front at Utah.”

“It was an up and down weekend for us,” said crew chief Steve Weir. “Up until this weekend our perfect storm of teamwork, talent, focus and luck had been raging. Today the storm got a little undermined.

“We are still working to understand why Travis crashed so we can give Travis the bike he needs to push as hard as he can. We have plenty of time to get the bike repaired and ready for Utah in a few weeks’ time.

“The team was working really well together again this weekend and it was impressive to see the pace Travis could do even with the set-up problems we were experiencing. We are still very much in the championship hunt, and will be ready to get our championship chase back on track at Utah.”

The MotoAmerica Stock 1000 Class’ next round would be MotoAmerica’s Round 6 at Utah Motorsports Campus in Tooele, Utah July 20-22.

The Superbike class’ next race would be at Circuit of the Americas alongside MotoGP.

MotoAmerica had its first female podium finisher at Road Atlanta. Jamie Astudillo piloted her Dale Quarterly On-Track Development Kawasaki Ninja 400 to a fourth-place finish is a dry race 1, and her historic third-place finish in the rain-affected race 2.