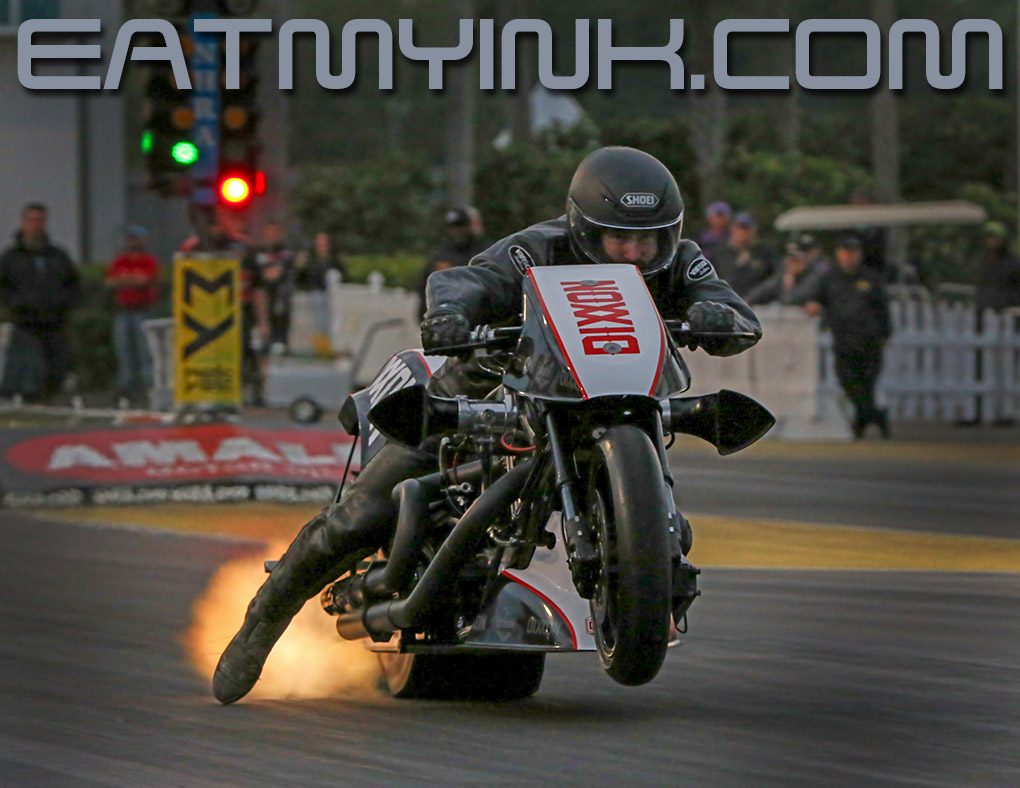 The opening Pomona round left everyone thinking the 2019 NHRA Top Fuel Harley championship would be a replay of last year’s down-to-the-last-320-feet battle between Tii Tharpe and Doug Vancil.

But then Beau Layne scored a breakthrough win over Vancil in the Phoenix final, and Gainesville saw both Vancil and Tharpe done in round one.

After beating Mike Scott, Layne benefitted when number one qualifier Tak Shigematsu no-showed in E2 following side-by-side explosions with Jake Stordeur. “After E1 (when Layne ran 6.29 to beat Mike Scott) my bike was hurt,” said Layne. “I slowed to a 6.38 on E2, but Tak was broke so it was good enough.”

Bob “Opie” Malloy’s consistent improvement is what got him past Tharpe in E1, while just getting down track at a reasonable pace got him past Rickey “Sharkey” House and into the final against Layne.

“We had three goals for the weekend that we hadn’t yet accomplished: run into the .20s, go over 230, and qualify in the top half. We met everyone.” And then some.

Did Layne expect to be leading points after three events? “Not at all,” said Beau. “My goal was to be in a position to make a run for the championship at mid-season. I think I might be in a good position early.”

Layne is getting places by making good decisions. After a couple races in lower classes, he found out his size required a bigger platform. “Realized I wasn’t going too go far being 230 pounds, so I stepped up to Top Fuel Harley. It’s never boring!”

Layne also hooked up with Jack Romine for his tuning. “Plus a lot more,” said Beau. “He’s like nobody I ever met. Jack’s our leader, and he’s put us through the School of Jack. There’s no diploma, but it’s a great school.

“The Romines (Jack’s brother Mike tunes for Vancil and built Layne’s bike) are the best. I couldn’t be (learning) under better people.”

Yet Layne also knows that a certain amount of racing luck doesn’t hurt. “Sometimes having the best team isn’t enough, other things need to fall into place to win.”

Like a good sponsor. Layne made a business leap by landing one from outside the sport— Dixxon Flannel. “I reached out to them when I was in Phoenix testing. They’ve been a great partner, and got us where we needed to be to bring home the Wally.” Or two.

When he’s not racing, Californian Layne customizes cars and bikes at his Whitey’s Kustom Speed Shop. That’s the same line of work that multi-time champ Vancil does, and now the self-proclaimed “Nobody” Layne is vying with Doug for an NHRA championship. “Shows anyone can do it,” Layne says with a wink.