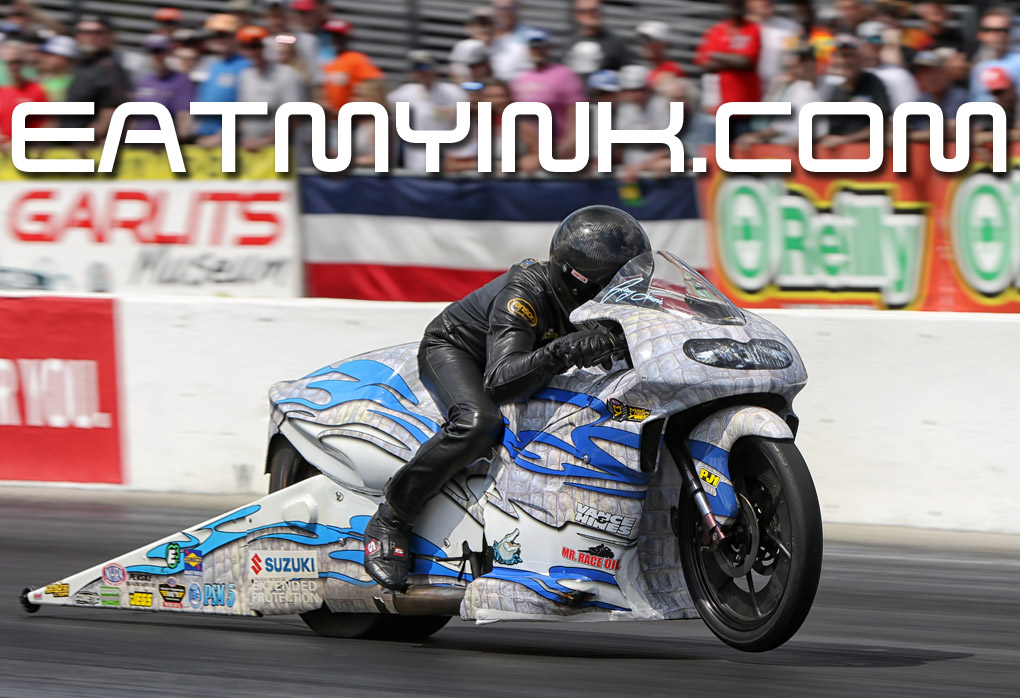 The first I heard about NHRA adding 15 pounds to V-Twins this past week was during a first-thing-in-the-morning call from White Alligator Racing (WAR) Suzuki tuner Tim Kulungian.

“Word about what?” I replied.

“Is there something we should be talking about that I’m currently unaware of?” I asked.

We then engaged in somewhat idle chit-chat about anything and everything at the Gators for exactly 18 minutes and 18 seconds before Kulungian said “So, 15 pounds for the Harleys and V-Twins.”

“You may wanna check the NHRA website or something.”

And so I did, and the Eatmyink Facebook Group went berserk.

There are some critics online talking about the Suzuki field’s reliance on Vance & Hines for their horsepower, and it’s a flawed relationship for sure. Every one you see regularly on a Suzuki in PSM gets their motors from V&H, except for Andie Rawlings, and she’s never qualified.

It wasn’t always this way, but as the platform aged and matured, V&H was left as the clear winner in the power-for-the-price race. Guys like Paul Gast moved on to Pro Mod, George Bryce and others migrated to the wide, creative horizon promised by the S&S V-Twin, and still others like Mark Peiser and Steve Tartaglia simply left the class.

And there was a time when the WAR Suzukis ran the kind of ETs we saw out of Matt Smith and the Harleys at the Gators.

Savoie isolates the problem to the crankshafts, resulting in lower horsepower.  “We’re just not makin’ the power now, that’s the bottom line.”

Indeed, Jimmy Underdahl broke a Suzuki crank at 1000 feet when he had Krawiec thoroughly beat in E2 at Gainesville (Krawiec bogged to a 1.149 60 foot time).

“But I tell you this, they (Vance & Hines) been workin’ their ass off,” continued Jerry. “They thought they found it over the winter, and maybe they have, but we’ve still got some little issues going on.”

“Vance & Hines has a listening ear,” agreed Kulungian. “They take action, and they do their best to provide products that keep the class funded, safe, and all the other things. They’re always trying to tweak a few things and make it better than it was yesterday. ‘This material is doing this so let’s try this material,’ and so forth. But it’s the same principle (crank) design (as 2016).”

“Somewhere between the wristpin and the output shaft—which is what your sprocket’s on—you want to absorb as least amount of energy as possible so that all that all that energy is put towards the rear wheel, turning that wheel and moving your vehicle forward.

“So is it possible that somewhere between the bottom of the wristpin and the sprocket is absorbing some of that energy—yeah. There’s a lot of moving parts there, you know?

“I work on these engines every day. We cycle through seasons of parts, and you’re dealing with some inconsistencies from the people that actually manufacture the steel, all the way down to the people that machine it, and the people that heat treat it.

“On top of that, you’re taking eight or nine eccentric pieces of steel, putting a bearing on them and pushing them together, and trying to get it within half a thou of being true. My point is, there’s a lot going on there. There’s seasons of these parts when you push these things as hard as we do.

“But when it comes down to it, you can’t deny that we’re not performing like we did then. Either we’re off on our tune-up or the energy is getting absorbed somewhere.”

“The problem with the Suzuki is cranks, and more cc’s (cubic centimeters) will be hard (to find),” GT Tonglet said in the Eatmyink Facebook Group. “The platform is too old to perform at these levels. Y’all need to remember we (Suzuki) are the only brand with a manufacturer part number.”

Kulungian agrees. “We’re pretty tapped out on this platform. We’ve gone from 92 cubic inches to 113. We’re kinda to the max on our bore spacing, and we’re already cutting our clutch basket down to make clearance for the connecting rod, so we’re maxed out on stroke. There’s really no where else to go.”

Kulungian’s dream gift—without hesitation—for the Suzuki platform is a purpose-built engine. “Something I can do R&D on for the next 15 years and find horsepower.”

And that, my friends, we’ll discuss in Part 4.