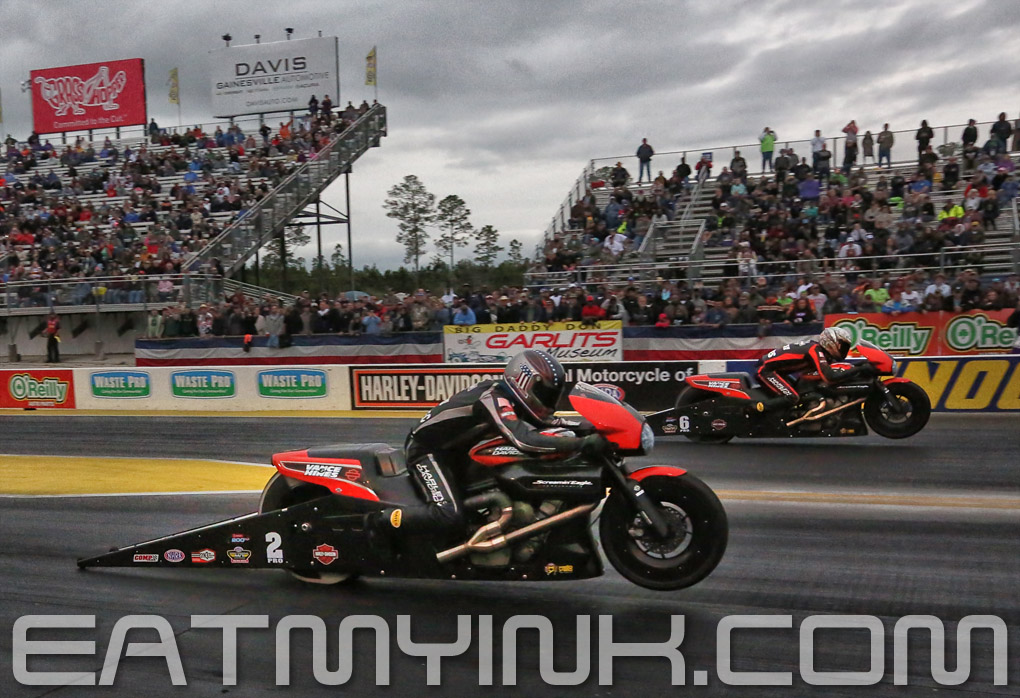 The 2019 Gatornationals final—a rematch of last year’s final between Andrew Hines and Eddie Krawiec—was the quickest side-by-side pass in the history of the class, by the class’s two all-time winningest riders. All of Hines’ and Krawiec’s wins have been on Vance & Hines Harley-Davidsons.

Hines qualified number 1, won the event, and broke a six and a half year-old national ET record, previously set by the exceptionally controversial 4 valve V-Rods in 2012, the same bikes that won 15 of 16 events in one season, and the last bikes to run at a 640 pound minimum.

Until now. After the V&H H-D Street Rod’s Gators success—and the comparatively lesser success of Matt Smith’s S&S Gen2 powered EBR in Friday qualifying—all V-Twins have been levied with 15 pounds, bringing them up to the 4-valve’s 640.

The 4-valve, which was legalized into the NHRA rulebook much like the NFL Colts move out of Baltimore, was eventually outlawed. The extra pounds did little to alter the motor’s success.

But what sort of effect will it have on the current V&H Street Rods?

Despite popular pit opinion, Eddie Krawiec says that the Street Rods were running at the previous legal limit of 625 pounds and will have to add the full 15 pounds added yesterday by NHRA. “It is what it is,” grumbled Eddie via text (yes, you can hear a grumble in a text message).

Andrew Hines and V&H fabricator Mike Mullaney have clearly worked hard to get his new bike down to weight.

Hines has (now needlessly) lost some weight himself over the off-season, although being fit is never a bad thing, nor is adding weight where you want it. Three to four times a week at the gym shed 10 pounds of Andrew’s tall-for-the-class frame.

“With me losing weight, and the bike losing weight by removing some components, I was able to make weight at the track,” said Andrew. “Last year I was running about 10 pounds heavy, and that wasn’t helping the bike accelerate.

“The motorcycle I had this weekend was phenomenal,” Hines said about his Mullaney-fabricated mount. “It was tracking straight down the track and it responded to all of the changes. That made it so much easier to focus on going out there and racing, cutting good lights, and not really worrying about what could happen the very next run.

“I kind of kept my head level on the tuning and made sure I wasn’t going to out-do myself. That 200 mph (Denso 200 MPH Club spot) was out there and it’s something I really, really wanted to get. I took a chance on my second qualifier. I knew that the weather was gonna be good on Saturday so I chopped the throttle early to try and get in front of everybody on the third qualifying session. Unfortunately it didn’t quite pay off and I missed it with a 199.94, so that’s a thorn in my side.”

That’s a revealing statement, and shows just how comfortable this team’s handle is on the class. This despite lagging behind Smith’s 6.75 on Friday. “After Matt ran the .75 he rolled around the corner and said ‘Your record’s in jeopardy’ and I said ‘I know!’” recalled Hines.

Amazingly, it was Hines’ first Gatornationals win since his very first win ever in 2004, back when GT Tonglet was his teammate. Andrew even lost to Matt Guidera once in a Gators final for crying out loud.

This was Andrew’s 49th win, Krawiec is just behind with 47. The success of the V&H H-D collaboration is phenomenal.

Hines said he was struggling last year with “coming out here and wanting to perform 100%, and you can’t lax any percent at all. I found the way to win.”

Having all of his opponents—Cory Reed (S&S), Jerry Savoie (Suzuki), and Hector Arana Jr (S&S)—redlit against him didn’t hurt in the way-to-win category, but naturally opponents gamble on any edge they can find against the ET record holder.

Krawiec was the No. 2 qualifier for the event and defeated Scott Pollacheck (S&S), Jimmy Underdahl (Suzuki) and Joey Gladstone (S&S) en route to his fourth consecutive Gators final round.

Angelle Sampey qualified 6thin her first outing with the Vance & Hines/Harley-Davidson team, but had a lurid .120 light alongside Gladstone’s .002 in round 1.

So the possibility of a three-Harley semifinal is very real—an ominous beginning to the year for the class, especially for the far-from-200 mph Suzukis.

As for the S&S powered bikes, “Matt’s ruining it for all of us,” joked John Hall, who failed to qualify on his Blake Gann massaged S&S Gen1 Buell. Even Hall will be adding weight next time out—if his next time out is on a V-Twin….

As for Smith, who as a 3X champion privateer racer probably works harder than any single person in the sport, let’s say he and wife/teammate Angie are not so happy about adding weight. “I’m LIVID about it,” Angie messaged me yesterday.

“Four hundredths and 1 mph is what it will slow us down,” said Matt. “The Suzuki camps need to do their own motor program. Where would all us Buells be at if we relied on one team to give us horsepower (like nearly all of the Suzukis do with Vance & Hines)? I promise not where we are now….Spend the money and do your own program or don’t bitch if you want to buy a crate motor… “

And buying a crate motor might just be what this is all about. IF (and that’s a big IF) the current generation Harleys are as unaffected by 15 pounds as the V-Rods were, and the S&S bikes feel the pain of the weight gain, then Vance & Hines—both their in-house Harley  team and their Suzuki customers—are the clear winners of the weight gain game.

More to come in Part 3