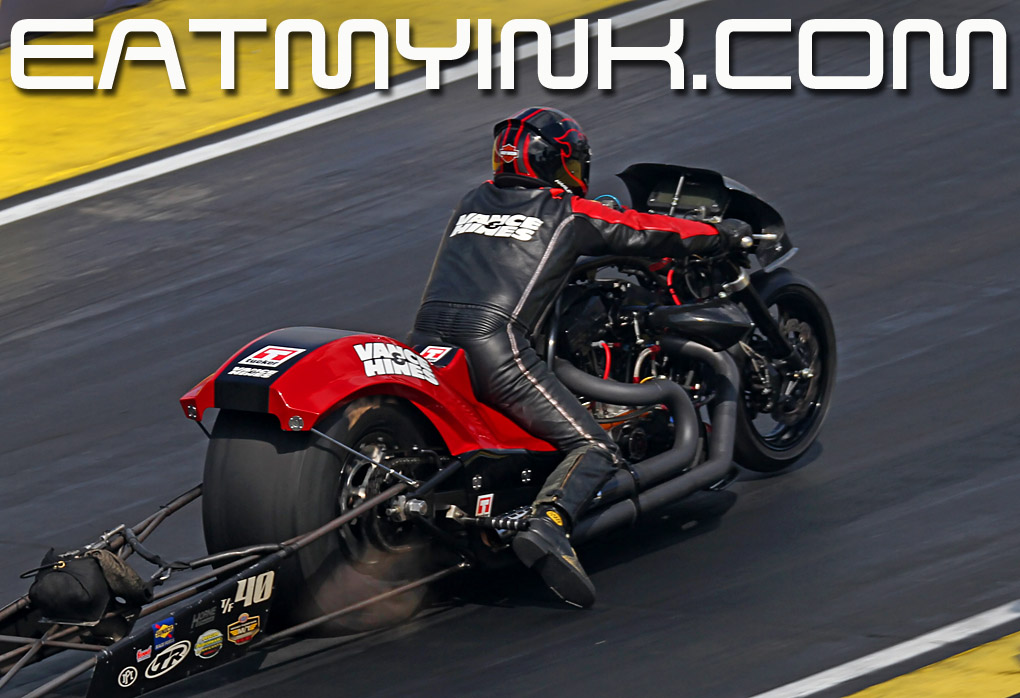 For a class that was decided in a final round battle between these two titans last year, this start bodes well for another bruising season.

Tharpe came from behind—in points and on the track—to win that one last year in Indy when Vancil’s Steve Horne-owned, Vance & Hines-sponsored bike nosed over at half-track.

Vancil and builder/co-tuner Mike Romine—with Matt Hines, Doug’s wife Julie and Mike’s wife Patti—tested in unseasonably cool weather at Indy a week and a half or so before the U.S. Nationals race weekend—which turned to be very hot and humid. “We didn’t really run that great in testing,” Romine laughed back then. “We changed the ignition, hoping that would help. I’m not so sure we didn’t show up worse than if we’d left the other ignition on it.”

But they did show up with an 18 point lead. The class had five whacks to hit the piñata at the U.S. Nationals and eventually an excellent field spilled out. But Vancil—whose consistency has been his ace card throughout his career—dropeed a cylinder a few times and failed to get down the track every qualifying pass until the last day, when he finally got in the field. “We missed it on Friday night, which is when you could actually run good, and we weren’t even close,” said Romine. The Vance & Hines bike blew the tire off right away that round.

But the bike ran flawlessly in the first two rounds on raceday, taking out Tharpe’s team boss Jay Turner in E1—crucial since Turner was trying to help Tharpe win the championship easy and early.

But Vancil’s dropped cylinder returned after Doug had legged out a lead in the final—losing the race and the championship to Tharpe. “Sometimes, when you can’t really understand why it did it, I think you just forget about it and move on,” Romine chuckled afterwards. “There’s no reason it shoulda done what it did, but it did, you know?

“I leaned the bike out for the bad air. I mean, I thought I showed up with it leaned out enough, but obviously it wasn’t. The earlier runs today (raceday at Indy), it drove right through that spot—no problem. This time, it just took a notion, I guess.”

I asked Romine if the bike dropped a hole in the left lane (where it was for the final) more than the right. “It don’t care,” he laughed again. “We can screw up in either lane.”

The bike had run well in the mid summer heat at Bristol last year before Vancil redlit against Tharpe in that final, so the Indy performance in similar conditions clearly had Romine scratching his head at the time. “But we ran good today (until the final). That .32 (Vancil’s E2 ET against Bob Malloy) was probably low ET of the day. But when we needed it, it didn’t get down there. Sometimes it’s a strange sport. I wouldn’t be surprised if we left it alone, went out a half hour later and it ran right down through there.

“They want fuel to go fast, so anytime you lean it out, you’re not helpin’ the cause.

“We’ll get over it. It’s not the first race I’ve ever lost. It might be one that HURTS worse! But they all hurt when you put so much effort into it.

“And Terry Vance was here, and Byron Hines. Their shop is two miles away so everybody’s here. But they came over and congratulated us on doing an excellent job of representing them for the season.

“Terry and Byron have raced so much—they understand racing. They understand that sometimes there’s luck involved. We got lucky some rounds this year and others did too. If I coulda won with a 6.80 that round, I’d a been happy with a 6.80. A 6.44, people will see that and say ‘That’s not a very good run.’ But you have to be here to understand.

“We didn’t get what we wanted, but we made it interesting, didn’t we? It’s good for the class and this whole NHRA thing.

“You always wanna win, and the first day is tough. But you look at it tomorrow, or later tonight, and really what we did was pretty good for just startin’ out. I mean we’re both experienced guys, but we’d never run together. And Doug hadn’t raced for ten years.”

It’s not a natural fit for top-level combatants like Vancil and Romine to suddenly work well together like they do. Egos at the top often mix like ice cream and head cheese.

Vancil has always tuned his own bike, while Romine has tuned for himself and a full resume of customers. Interestingly, the two have not divided responsibilities on the team—like one focuses on the clutch while other minds the fuel system.

“He knows what he’s doing,” Romine said about Vancil. “I have input and he has input. We’ve never butted heads. We’ve probably had a difference of opinions a couple of times.

“He’s run his bike a little different than I ran (client Doug) Horne’s bike. But he (Vancil) changed a little bit, and I definitely changed. But it’s worked out for the two of us. There was never a decision made by just one person, ever, on any of the passes. It was always a together deal.”

Forever a teenager, Vancil seemed tickled but not surprised to come back on top—winning this opening Pomona race last year—after a ten year hiatus. But the bikes weren’t really running any quicker than they were when he left the sport. That might change, with a proliferation of blowers and the stepped up competition that comes from racing in the Big Show.

Compared to his bike from ten years ago, Vancil says the motor is the same size (196 cubic inches). “I had a 100 pound clutch (on the old bike), this one has a light clutch. That was probably a more sophisticated clutch than we have now, but It runs good. There are more control systems on the bike. Better clutch control, better fuel control, but the ignition is the same.”

Vancil finds it no different racing in front of 30,000 at an NHRA race vs. (fill in your best guess here) that attended AHDRA races. Ditto from being the star category at AHDRA vs. a cult class at NHRA. “It’s no different, really. Once the bike starts you just do your thing. You don’t even know anyone else is there. You’re just trying to do the best and safest you can and not get scratched up.”

Vancil also had no specific thoughts about racing against Tharpe and Jay Turner Racing. “I just try to do my own race.”

Romine had hoped to have a second bike under the awning for 2019. “We’re a one bike team. We’d like to have two to get more information to go by.” Hello Terry Vance, are you listening?

Now it’s raceday in Pomona, and only one rider—either of these two or one of the six others qualified—will leave with the first points lead of 2019.